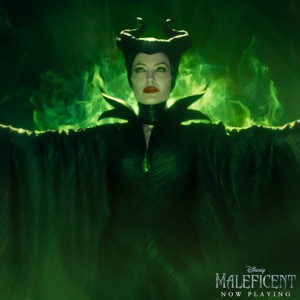 Like many of us, I grew up watching several Disney movies, Sleeping Beauty being one of them. Maleficent ranks very high on my list of favorite Disney villains as her tenacity knew no bounds and she could turn into a dragon.   When I first heard Disney was making a movie about this character I got very excited as I would be able to see one of my fave characters in all her evil glory on the big screen wreaking havoc because she could. With Angelina Jolie cast as Maleficent I had faith that she would do a good job. I came into this movie cautiously optimistic. Since ABC’s Once Upon a Time TV series has worked hard on redeeming the main villain characters Rumplestilksen and Regina, it was no surprise that this movie would try to do the same for Malificent.

The only reason we have for Maleficent crashing the party is because she didn’t get invited, according to the original story by Charles Perrault.  This movie takes another approach into what happened in the past and the consequences afterward. I think the movie did a good job with bringing in elements from the classic 1959 Disney film and having new elements in it as well.  One of the new elements was having the crow be Malificent’s companion that she could shape shift into a human or any other creature when she wished.  The crow, named Diaval (Sam Riley) was way less annoying than the animated version.  I also enjoyed the twist of how the dragon came into play.

The plot of the movie is predictable.  However, I think it enhanced Maleficent’s character rather than detract from it.  Maleficent ran into a human boy named Stefan as a young fairy, they grow up, she falls for him, and because of the boy’s ambitious nature, he betrays her by removing her wings so he can become king.  Ticked off, Maleficent goes into a funk and the forest creatures give her a wide berth.  As time goes on Stefan (Sharlto Copley), and his wife have a baby girl, Aurora.  When Maleficent hears this, she decides to crash the party celebrating the birth and creates the curse. Maleficent becomes relatable in that she tries to get revenge from not only a broken heart, but because someone she trusted and cared about stole apart of her body and identity, her wings. People, adults mostly, have known at least some form of betrayal in their lives and have at least thought about getting revenge the wrong way.

The crashing of the celebration was my favorite scene out of the whole movie because it was most like the classic Disney film.  From the three fairies bestowing gifts of grace and beauty, to Maleficent stroking her crow.  Even with the little changes, such as Maleficent having Aurora go to a deep sleep instead of death and including in her curse about true love’s kiss breaking the spell, the scene made me feel nostalgic about the old animated movie.  Jolie played that scene to perfection.  The special effects with magic was realistic, especially surrounding Jolie as she was conducting the spell.

The redemption of Maleficent comes from Aurora (Elle Fanning). She saw the child grow up, looking out for her when necessary.  The scene where Aurora is still a little girl and Maleficent picks her up and Aurora starts feeling around her horns was very touching.  Maleficent sees the innocence and appreciation of the forest in Aurora that she had when she was a young fairy.  Maleficent then tries to reverse her curse but because of the specifics, she is unable to do it.  So she tries to do her best to stop it, but after that doesn’t work, hurry it along so Aurora can wake up happy to live her life.  She thinks Prince Phillip (Brenton Thwaites) who meets Aurora in the forest will be able to break the curse because of how they interacted with each other.  I did like the twist of Maleficent, because of the love she doesn’t even realize she has for Aurora, kisses her on the forehead, and breaks the curse instead of Philip.

Overall I enjoyed the movie.  I think Jolie did a solid job as Malificent.  She pulled off the confidence and the fierceness of this iconic character.  I was sold on Sharlto Coplay’s portrayal of King Stefan.  His ambitions had consequences as well as his obsession with destroying Maleficent at the expense of his daughter. Elle Fanning played a decent Aurora. She had good chemistry with Jolie in their scenes together.  The three fairies, Knotgrass (Imelda Staunton), Flittle (Lesley Manville), and Thistletwit (Juno Temple) were just okay for me.  While they had the silliness, I was disappointed they didn’t have that fighting spunk like in the animated version.  Prince Phillip’s character was also just okay for me.  It felt more like a cameo than anything else and I would not have missed him if he wasn’t in it at all.  This is not Brendon Thwaites fault, just how he was written.

At the end of the day, the curse was an evil thing to do despite the motivation because the child was innocent and had nothing to do with Malificent’s problems with King Stefan. She redeemed herself by realizing what she did wrong and correcting it to the best of her ability.  Even though Stefan’s wife played a minor role, I am glad that the movie did not add to the plot of two women fighting over a man as I felt Maleficent had no reason to turn her anger on the queen. The marriage was arranged, nothing more.  I thought the special effects with the magic and the forest creatures were well done.  It didn’t feel like I was looking at CGI made scenes. The makeup and costumes of Maleficent was on point.  The battle scenes were also good.  The plot did have some holes in it, and some scenes did not make sense to me, like how there is a room at the castle of spindles when Stefan burned all of them.  However, it didn’t stop me from enjoying the movie.

If I had to rate the movie from 1 to 5 I would give it a 3.  It’s worth seeing the matinee show. You do not have to see this movie in 3D.

Went to the library and Natty fell in love with all things fiction. Natty grew up watching all kinds of movies ranging from Star Wars, "The Chinese Connection", all things Disney, musicals like "The Music Man" to comedy action films featuring Whoopi Goldberg. Lover of old school cartoons like X-Men, TaleSpin, and DuckTales. Grew up on shows like Family Matters, Full House, and Mighty Morphin Power Rangers. Have eclectic musical tastes. Lover of books, appreciation of all things geeky.
Previous 324B21: The Orphan Black Podcast Ep. 8 “If They Touch Me I will Cut Them”
Next New Video Game Releases for June 3rd