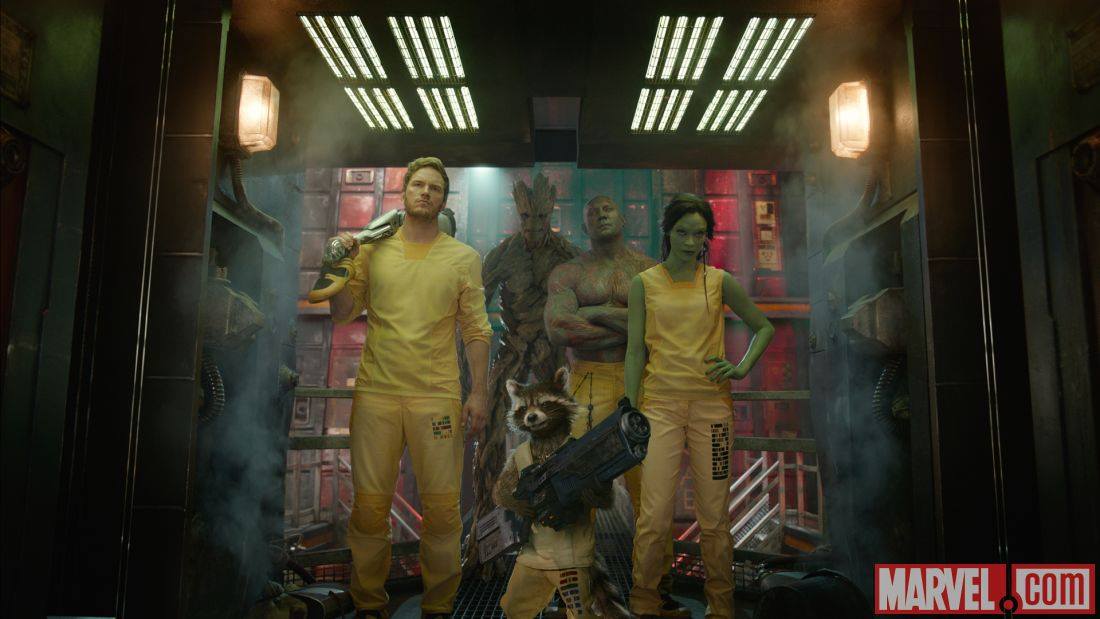 “What a bunch of A-holes” remarks a deadpan Peter Serafinowicz during the trailer for Guardians of the Galaxy. Whilst that may be true, depending on perspective, it’s those A-holes who are headlining the latest outing in the Marvel Cinematic Universe (MCU). And it might just hit the big-time.

The film will be James Gunn’s (Slither, Super) first blockbuster as a director, and in fact is only his fourth effort behind the camera (guest scenes in Movie 43 and Thor: The Dark World notwithstanding). But it wouldn’t be Marvel if they chose established directors, with the men behind Captain America: The Winter Soldier, brothers Joe and Anthony Russo, having only helmed three feature films prior to their turn in the MCU.

So on top of hiring a guy with no real experience on a major film set (which is by no means a bad thing, Slither remains a personal favourite), Guardians will feature a talking raccoon (Bradley Cooper), a WWE superstar (Dave Bautista), and a tree with a three-word vocabulary (Vin Diesel). Parks and Recreation star Chris Pratt, who shed 30lbs for his role as the masked Star-Lord, former Doctor Who companion Karen Gillan, and a somewhat veteran of sci-fi, Zoe Saldana, also join the party. Michael Rooker, most recently seen on The Walking Dead, is in on it as well, with The Hobbit player Lee Pace and six-time Oscar nominee Glenn Close rounding out the stellar (or should that be interstellar?) cast. Combine all this with a budget that will exceed $150 million, it’s safe to say Marvel are going all out.

Which means only one thing: Guardians of the Galaxy simply must succeed, both financially and critically. The fate of the franchise doesn’t rest on this by any means, that burden belongs to 2015 release The Avengers: Age of Ultron, but a flop here could signal the start of a snowball effect on the series and harm future films if the quality of this isn’t to the standards set by most MCU films so far. Whilst it’s unlikely to beat the dizzying heights set financially by The Avengers or Iron Man 3, or critically by Captain America: The Winter Soldier, it should still be a solid venture that fits perfectly into the MCU.

After all, who doesn’t want to see a film headlined by a freaking raccoon with a machine gun, a tree that can only say “I am Groot”, a green alien played by someone who’s already been blue, a guy with nearly 15 years of professional wrestling under his belt, and a mixtape-making human played by one of the most diverse actors in Hollywood today. It will appeal to fans of the MCU as well as kids who want to see an explosion-packed movie (who doesn’t want to see that??), and the August release means it shouldn’t pose too much of a problem to any schedule they may have for whatever reason.

It’s a gutsy move by Marvel, choosing the film to be about a little-known team of heroes (little-known to non-comic book fans, that is), but after garnering huge momentum by using prolific characters like Captain America and The Incredible Hulk, it’s about time they took a risk and chose names that people don’t recognise.

We’ll have to wait until the start of August to know how well it does, but one thing is for certain: everyone, everywhere, will be Ooga Chaka-ing for a while to come.

Journalism student in England. The three Ss of my life: Sci-fi, Superheros and Sport.