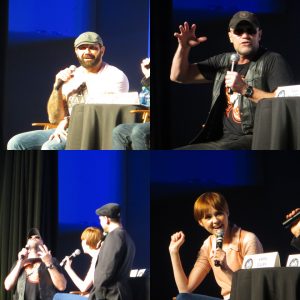 Karen Gillan, Michael Rooker, and Dave Bautista were scheduled to be in a panel together but wound up being in three separate panels, with some interaction in between.  First up was Dave Bautista, who will be playing Drax the Destroyer (a character who first appeared in the Iron Man comic books in issue #55) in the movie Guardians of the Galaxy.  Drax was originally created in the comic books to destroy Thanos.  Dave was really excited to get the part and answered a fan’s question on how he got the role. Dave has an enthusiasm for acting and is looking forward to his role on the Kickboxer remake. Watch the video below to see what role is he playing, but if you’ve seen the original you can probably guess.  He also answered several questions during his panel, and He mentioned that he would love to have a match against Dwayne “The Rock” Johnson. That’s one match I want to see happen!Next up was Michael Rooker, he came a little early for his portion of the panel.  In the Guardians of the Galaxy movie he will be playing the character Yondu, a hunter from the alien planet Centauri who helped form the Guardians in the comics.  Rooker discussed the Walking Dead and how he is still close with Norman Reedus.  Yes, he is bitter by not the fact that he got stabbed, but how many times he got stabbed.  Rooker describes some of his favorite scenes that he did in the movie Slither.  He also talked about how Hollywood need to bring slapstick comedy back like “The Three Stooges.”  Michael then proceeded to act like he slipped on a banana peel.  He has had such a varied career and he seems to enjoy each role he plays.Last but certainly not least, Karen Gillan had her mini-panel.  She came early enough to interact with Rooker. They even started asking each other questions!  Karen talked about how she trained for the role of Nebula and when she cut her hair.  I remember when she revealed her bald head during San Diego Comic Con last year, and how I was so surprised at that! Rooker and Gillan both compared their bald heads during the San Diego Comic Con panel, which was funny. During her mini-panel at Wizard World Philadelphia she even flexed her arms. One fan asked about her new tv show “Selfie” and how she prepared for that role.  Karen replied that she wanted to find reasons for her character doing the things she was doing and making it believable.  Gillan then revealed her next project,a revenge western movie called In A Valley of Violence, which is also starring Ethan Hawke and John Travolta.  During the panel there was even a Nebula cosplay from a fan in the audience that was really good! Gillan’s panel was fun and it was good to see her twice in one day!All this and more happened in these mini-panels, as you can see in the video below!

Went to the library and Natty fell in love with all things fiction. Natty grew up watching all kinds of movies ranging from Star Wars, "The Chinese Connection", all things Disney, musicals like "The Music Man" to comedy action films featuring Whoopi Goldberg. Lover of old school cartoons like X-Men, TaleSpin, and DuckTales. Grew up on shows like Family Matters, Full House, and Mighty Morphin Power Rangers. Have eclectic musical tastes. Lover of books, appreciation of all things geeky.
Previous SDCC Offsite events 2014
Next Jonathan Maberry’s Joe Ledger series optioned for Film/TV