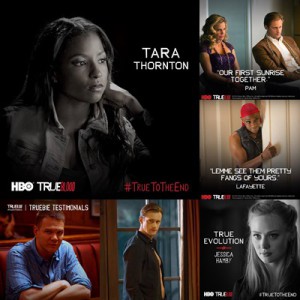 With trepidation, I began watching the final season of True Blood which premiered on June 22, 2014.  On our podcast TVTalk with Natasha and Kimberly, we do get more into detail with what happens in each episode.  There were a several funny moments (Ginger) and some expected sad moments this season.  Now that the series finale has come and gone, it is very bittersweet. Let’s take a brief moment to acknowledge the deaths of characters that died this season:

And now let’s get the lowdown on the good, the bad and the “meh” of this final season.

Eric and Pam’s storyline I enjoyed overall.  The important thing was both of these characters made it through the finale rolling in the dough! I cared what happened to these characters, played to perfection by Alexander Skarsgård and Kristin Bauer van Straten.  I was initially surprised that Eric was on death’s door from him contracting the Hepatitis V disease (Hep V).  Fortunately Pam convinces him to live at least long enough to kill Sarah Newlin.  It is then revealed that Sarah is a) alive, and b) she drank the antidote to the disease which makes her blood the cure.  Darn it she can’t die! Eric and Pam manage to find Sarah and have several run ins with the Yakuza assassins of the Yakanomo Corporation (the same company that made the True Blood drink).  They team up briefly against Mr. Gus, who is the CEO of Yakanomo. Yakanomo is using Sarah to create NuBlood to help vampires fight the Hep V disease. Eric got cured thank goodness so he was good to go.  Eric and Pam fighting the Yakuza and killing Mr. Gus were the highlights for me in the series finale. While a part of me really wanted Ms. Newlin dead, she served her purpose and I feel like she is getting payback for what she did last season in the best way possible, thanks to Pam and Eric. Not only that I enjoyed seeing Michael McMillan reprising his role as Steve Newlin haunting the heck out of her. One of my favorite moments this season was the whole flashback of how Fangtasia was born and by whom, Ginger!

Another good moment which I thought was hilarious, was Ginger finally being able to have sex with Eric in the 2nd to last episode.   Just that entire scene had me cracking up.  I appreciated the writers for showing us that Ginger wasn’t just some woman that screamed all the time.

A poignant scene that made me tear up was the scene between Sookie and Arlene when she was on death’s door from being sucked dry by the Hep V vampires that kidnapped her earlier in the season.  We got to see Todd Lowe as Terry Bellefleur in a vision.  Just seeing Arlene and Terry together again was so heartfelt and made me miss Terry all over again. As much as the character Arlene annoyed me over the seasons, her relationship with Terry felt real and in that moment I did not want her to die. Kudos to Carrie Preston, Anna Paquin, and Todd Lowe for acting the heck out of that scene.

Other scenes that stood out to me were Jessica’s protection of Adalind in the first episode. It was really well done, especially that showdown right before dawn with a Hep V vampire. During that scene I definitely wanted Jessica to win that showdown and Adalind let her in before the sun rose.  Also little moments like seeing Grandma Adele Stackhouse in a flashback, seeing Hoyt again, and Andy proposing to Holly reminded me of what made me love the show in the first place. I may get creamed for this but I did like the very end of the series finale of True Blood, where we saw glimpses of what was happening with some of our favorite characters.  It was nice to see that several characters seemed happy and just living life.  I would have liked to have seen Sookie’s significant other though!

I felt several times that Bill’s storyline dragged. It got to the point where I no longer cared that he wanted to meet the “true death”.  Even Bill’s flashbacks were boring. What makes it so bad is that Bill’s and Sookie’s reunion came not too long after Alcide’s death, which did not have to happen.   If Sookie wasn’t out in the woods being bait in the first place, Alcide would not have gotten shot by some crazy anti-supernatural people.  Sookie and Alcide as a couple was a bad idea in the first place. Even though Alcide loved her, Sookie did not have the same kind of passionate love that Alcide deserved.  Now he’s dead. What a waste.  I also felt like it was unfair of Bill to ask Sookie, the one he supposedly loves, to kill him.  While the thought of her using her fairy ball on him made sense initially; I am glad that Sookie decided not to because she had to acknowledge that her fairy powers are just as much a part of her.  What was up with Sookie hearing Bill’s thoughts?  There was no time to explore that part or the implications.  His death scene took way too long and I was glad it was over in the series finale.

Tara’s death and ghost storyline was confusing. I’ve mentioned on the TVTalk podcast several times that I felt that she deserved to die onscreen if they were going to kill her off.  Bill, Alcide, Violet, and even Ms. Fortenberry got that courtesy. Why not Tara?  I did not see how reliving Tara’s memory of almost shooting her father resolved the issues between Lettie Mae and herself when they made headway with it before the season premiere.  I guess this was the only way to keep Tara somewhat relevant. Ugh. Tara didn’t even talk to Lafayette in her last scene on the show, and as cousins their relationship was way closer. Was this also the only other way for Lafayette to have scenes as well? I also felt like Lafayette was underutilized this season.  Lafayette deserved to be in a relationship with someone who was not already taken.  I was hoping that James was not with Jessica so he was free to be with Lafayette in the beginning instead of Jessica finding them having sex on a car.   It doesn’t matter that James and Jessica’s relationship was having problems. I guess I’m old fashioned.  What was up with Lafayette having no lines in the series finale?! He’s always had just as many good one-liners as Pam! Seriously!?  All Lafayette gets is brief scene at the very end. He deserved better. Don’t get me started with Sam just driving away to a new life.

Adalind’s storyline was a hot mess with her relationship with Holly’s son Wade. She keeps putting trust in people she hardly knows. She almost gets killed by crazy Violet because of it. I get young love, but she needs to be reminded all the time that she is half fairy, so she needs to be extra careful because of her blood. I wanted to fast forward her scenes while watching the show live.

While I always thought Hoyt and Jessica were a good couple, I would have been just as fine if he had left town with his now ex-girlfriend Bridget without seeing Jessica.  It was good of Jessica to inform Hoyt of their history together and what happened with Jason, but I do think their reunion was rushed because of the series ending. Was a wedding really necessary?  Even Jason’s and Bridget’s relationship felt forced and rushed too.  Did Jason have to fall for someone who just broke up with Hoyt who used to be his best friend?

True Blood may have gone out with a whimper, but the characters of Bon Temps will always have a special place in my heart for bringing me good moments, like in Seasons 1-3.  Bittersweet indeed.

What moments stood out to you this final season of True Blood? What will you miss most about the show?  Be sure to leave your thoughts in the comments.

Went to the library and Natty fell in love with all things fiction. Natty grew up watching all kinds of movies ranging from Star Wars, "The Chinese Connection", all things Disney, musicals like "The Music Man" to comedy action films featuring Whoopi Goldberg. Lover of old school cartoons like X-Men, TaleSpin, and DuckTales. Grew up on shows like Family Matters, Full House, and Mighty Morphin Power Rangers. Have eclectic musical tastes. Lover of books, appreciation of all things geeky.
Previous TVTalk with Natasha and Kimberly Ep 37.5
Next TVTalk with Natasha and Kimberly Ep 37.9