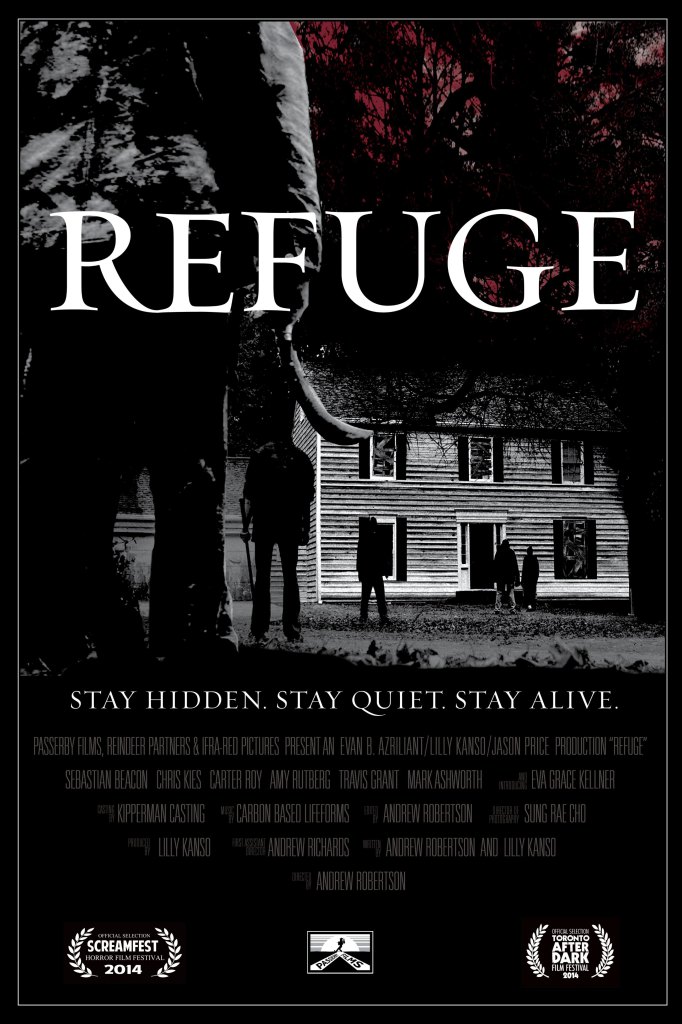 Refuge, a first-time narrative feature film from husband and wife filmmaking team Andrew Robertson and Lilly Kanso, is currently making the rounds of film festivals across the world, having already picked up an award for Best Director (Feature Film Awards) for Robertson at Sydney, Australia’s Fantastic Planet Film Festival in 2013 when the film was still called The Mansion. The film is next playing at Screamfest L.A. on October 18th and in Canada at the Toronto After Dark festival on October 22nd.

The plot is set some time after a massive epidemic has wiped out much of civilization; marauders are everywhere, leaving decent folk like Jack (Carter Roy of Castle) in a precarious position. Jack’s trying to keep whatever normality he can for his wife, Nell (Amy Rutberg) and daughter, Birdie (Eva Grace Kellner of Boardwalk Empire), along with their neighbor, Kyle (Chris Kies). Jack scavenges for food while the family stays in their boarded-up home. On one of his scavenging runs, Jack finds and takes pity on an injured Russell (Sebastian Beacon), bringing him back home to heal in safety. Unfortunately, Russell has some baggage, and that baggage is determined to find him.

Refuge was filmed in Georgia, and combines the rural landscape with an evocative score by Swedish ambient band, Carbon Based Lifeforms, to maximize the terror inflicted on the family. The filmmakers even had the cast live together prior to filming to enhance their interpersonal dynamics. The subject matter of a worldwide pandemic is especially prescient, given the current hysteria over Ebola. The Nerd Element recently did a brief Q & A with Robertson about his first foray into narrative filmmaking—his previous film was the political documentary, The Battle For Georgia (2009)—and why he chose horror as his genre.

The Nerd Element (TNE): On what did you base the idea for Refuge? What about this idea appealed to you as filmmakers and writers (Kanso wrote, as well as produced the film)?

Andrew Robertson (AR): Refuge is a straight up post-apocalyptic thriller. We love the genre and think its popularity reflects our collective anxiety as a species. It seemed for a while there in the 20th century, we were going to, through science and civilization, conquer nature, conquer everything that threatens—even conquer death! But now we’re sort of waking up to the fact that life is just as tenuous as ever and there are a million ways for things to fall apart. We felt like tapping into that world a little.

TNE: I understand you have been making horror films since you were a boy. Is that why you chose horror for your first narrative feature?

AR: Yes. Horror is a great genre to jump into filmmaking with because there are rules and touchstones you can follow to guide you on your way. And there’s a built in fan base, so if you work your ass off and make something decent, hopefully there’ll be an audience waiting for your film.

TNE: What were your favorite horror films growing up?

AR: All of John Carpenter’s films. He was a master at creating slow, building dread. The slow burn is something I love. Refuge has a slow-burn first act that lets you invest yourself with the characters. You’re waiting for everything to explode and when it does, that investment you made in the first act pays off.

TNE: How did you choose the actors for the project?

AR: We did a vigorous search in New York. I think the Achilles’ heel of independent film is acting you just don’t buy. We really wanted to bring performances that were believable. It’s about a family managing the apocalypse. You have to believe it or the film falls apart. Our cast is amazing. We feel very lucky.

TNE: How did having the actors live together under one roof affect the performances?

AR: It was terrific how it played out. We put them up in a house together because it just made sense on multiple levels.  It made sense for budgetary reasons and we hoped, too, it would bring them together and manifest the chemistry that would translate to the story. It totally did.

TNE: How was working with your wife on Refuge?

AR: Lilly is the perfect producer. She knows how to manage people in a way that is inherently warm, while also making people want to perform. She’s a true mobilizer, which is what you need a producer to be. She also has natural instincts as a storyteller. She can spot weaknesses in the narrative and can steer through or around them to elevate the story.

TNE: Where did you first hear Carbon Based Lifeforms and how did you approach them about scoring the film?

AR: I am a fan of ambient—Brian Eno, Aphex Twin, artists like that. I came across Carbon Based Lifeforms during one of my ambient, spacey binges and I was transported to a little cloud floating somewhere between the Milky Way and Andromeda. They have a massive following. They’re incredible, accomplished musicians living in Stockholm. I emailed them on a whim and somehow they responded. I showed them an early screener and they liked the film. And somehow they agreed to score the film. I’m still amazed and confused. It’s a wonderful, thoughtful, tense score.

Désirée I. Guzzetta is a freelance writer and poet who loves movies, books, music, and nerdy things, not necessarily in that order.
Previous Gotham Season 1 Episode 4 – Arkham Recap
Next How to Get Away with Murder Ep 4 Recap