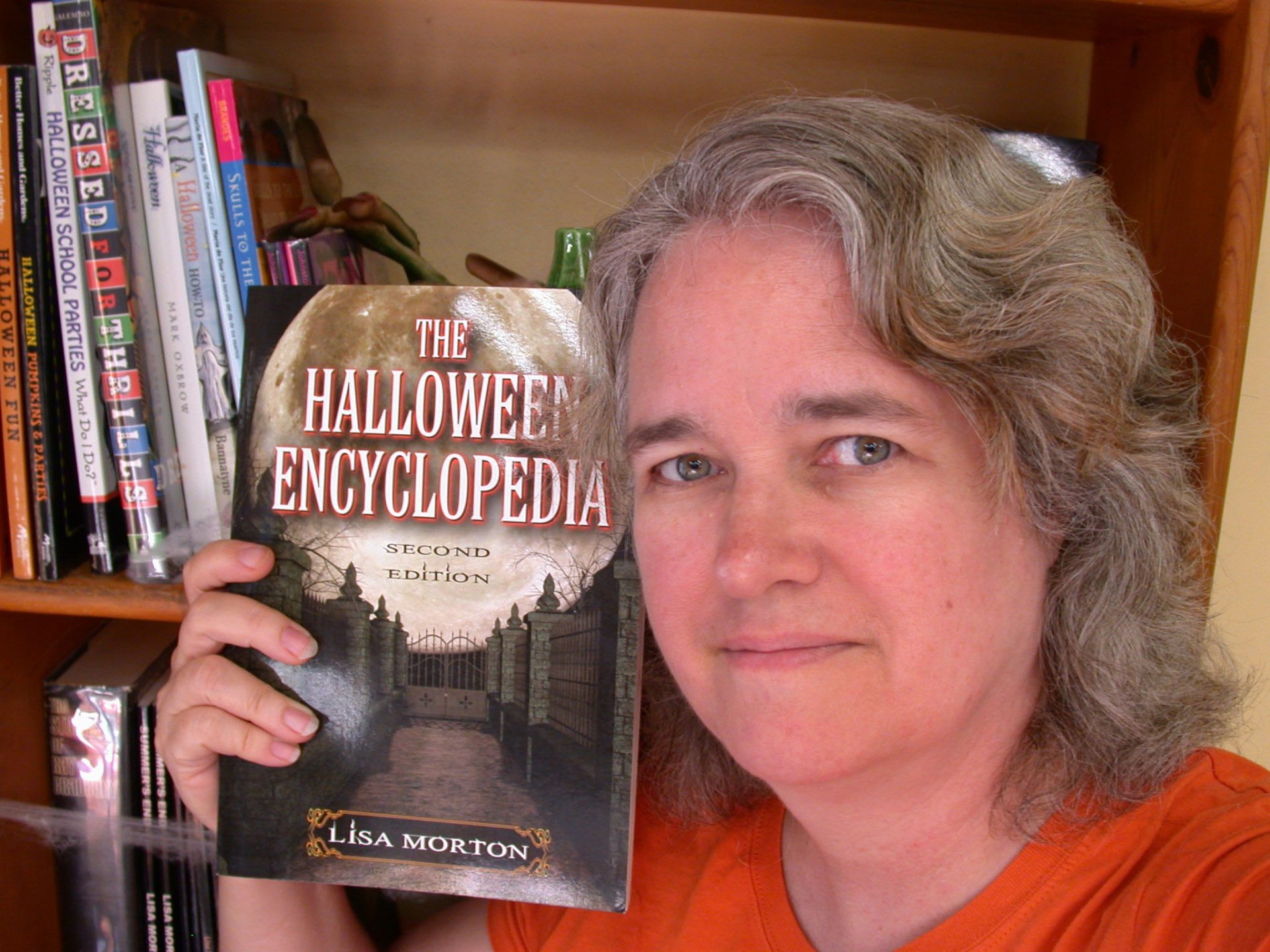 Halloween is almost upon us, and for some, it’s a favorite holiday. There are those who focus on the costumes and candy, while others fill up on horror movies, whether classics such as Psycho or new horrors to come such as The Babadook. Each year, there seems to be more and more talk about Halloween, whether in features like this one or on television, where Halloween specials abound.

Halloween is award-winning author/screenwriter Lisa Morton’s favorite holiday, so much so that she’s become a nationally recognized expert on the topic. Her non-fiction writing includes Trick or Treat: A History of Halloween and The Halloween Encyclopedia (currently in its second edition), and she’s been interviewed about Halloween by media such as The History Channel and The Wall Street Journal.

She balances her work on her favorite holiday with her prolific writing career; in addition to her Halloween non-fiction, Ms. Morton has written biographies of filmmaker Tsui Hark and actress Ann Savage. Her fiction includes numerous short stories and novels, and her most famous screenplay is cult film Meet The Hollowheads. She’s won six Bram Stoker Awards for her fiction, as well as the Black Quill Award and the 2012 Grand Prize at the Halloween Book Festival. Her most recent novels are Netherworld and Malediction.

Ms. Morton recently answered a few of The Nerd Element’s questions about her interest in Halloween and what the popular misconceptions about the scary holiday are.

The Nerd Element: What sparked your interest in creating a scholarly book on Halloween?

Lisa Morton: I’ve always loved Halloween because it’s so creative; it inspires us to make our own costumes and decorations, and to celebrate those creations. And I love all the imagery associated with it, whether it be the seasonal (harvest) foods or the spooky entities that allow us to test our fears in a playful way.

My first and most scholarly Halloween book was The Halloween Encyclopedia, and it came about almost by accident: I was working with a publisher who wanted to do another book with me, and they asked me if I had any ideas. I saw they’d recently done a Christmas encyclopedia, so I proposed one for Halloween. They went for it, and the rest is (Halloween) history!

TNE: What is your favorite myth about Halloween? What’s the truth behind that myth?

LM: I’m not sure I’d call it a “favorite myth”, but for years I was curious about where the notion that Halloween started as a Celtic holiday that celebrated “Samhain, the Lord of Death” originated. Several years ago, when I was researching Trick Or Treat: A History Of Halloween, I finally traced that back to an eighteenth-century would-be historian named Charles Vallancey, who arbitrarily decided that “Samhain” (the Celtic New Years festival) did not mean “summer’s end,” but referred to a “Lord of Death.” Even though Vallancey was denounced in his own time, his books found their way onto reference shelves around the world, and so one of Halloween’s most insidious myths was born.

TNE: Why do you think people hang on to Halloween myths?

LM: Unfortunately, historians quoted from Vallancey’s books and perpetuated the “Lord of Death” myth for centuries. Some of it was just sheer laziness—they didn’t bother to look at other sources—and sometimes writers had an agenda to push. For example, if they decided that Halloween was somehow evil because it incorporated imagery of devils and witches, then they could use Vallancey as “proof” that Halloween originated from the worship of a death god.

TNE: What is the single biggest misconception about Halloween?

LM: I’ve already talked about what I think is the biggest misconception, so I’ll mention two from recent times: 1) that the practice of trick-or-treat goes back thousands of years (it doesn’t; it’s less than a century old); and 2) that trick-or-treaters need to beware of poisoned candy and razor blades in apples (the truth is that there are really no documented cases of anonymous psychos tampering with Halloween treats).

TNE: What is the funniest thing anyone’s ever said to you about their own Halloween beliefs?

LM: I once had a twenty-something reporter basically beg me to tell her that it was okay for her to still be trick-or-treating. I gently tried to suggest to her that trick-or-treat was really about creating a sense of empowerment…in children.

TNE: Are there any movies or stories (or novels) that you feel best exemplify the spirit, if not the truth, of Halloween?

LM: I think the design of The Nightmare Before Christmas perfectly captures the holiday’s macabre yet whimsical spirit. I also applaud the way Trick ‘R Treat used so many of the holiday’s traditions in one film. And of course no literary author caught the holiday on paper better than Ray Bradbury; The Halloween Tree is the most glorious ode to the holiday ever penned.

TNE: Will there be a third edition of The Halloween Encyclopedia? What else are you working on?

Right now I’m working on a non-fiction history of ghosts. I should probably have chosen something smaller, because it’s proven to be kind of overwhelming!

TNE: Finally, which novel or story of yours would you recommend to a first-time reader of your fiction?

LM: If the reader is looking for a good, meaty read with Halloween content, I’d probably say Netherworld.

Sleepy Hollow S2 Ep 6 Recap: And the Abyss Gazes Back