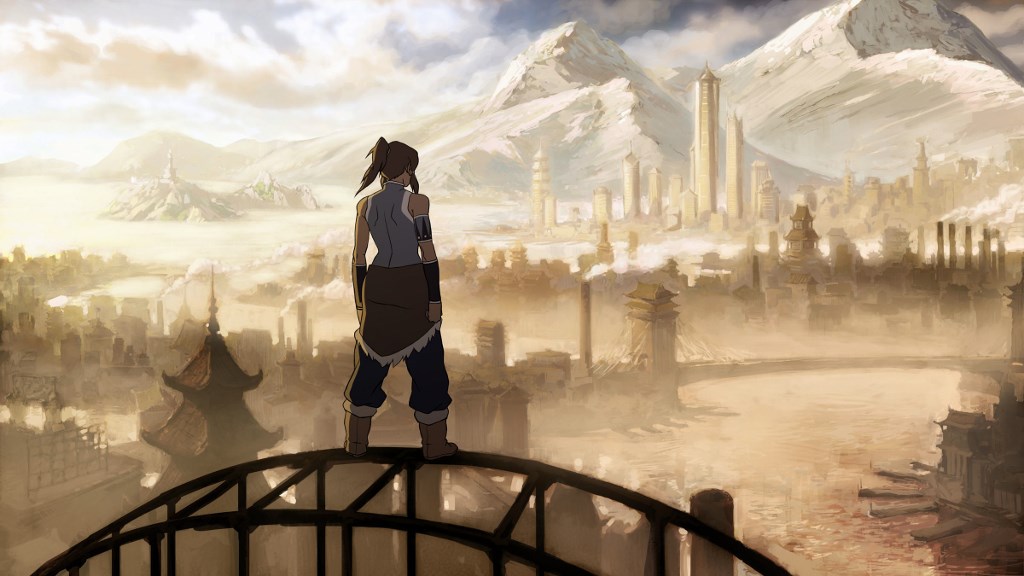 Apologies for the delay, we were busy with Stan Lee’s Comikaze – which was a complete blast!

This episode opens with Kuvira and her forces appearing at Zaofu – they park outside the gates of Zaofu. Kuvira and her fiancé talk about how to take over Zaofu, explaining the eyes of the world are upon them and they need someone like Bolin who can convince Suyin to sign a treaty. Back with Korra, she explains to Tenzin’s children that she is going to Zaofu and their will be no fight with Kuvira because she believes that she can be negotiated with.

Varrick and Zhu Li perform one of their spirit vine tests only to realize that it becomes an energy cannon weapon and cannont be controlled. The device explodes and Zhu Li almost gets thrown off the train, Zhu Li thinks she is having a tender moment with Varrick however he only saved her life so she could assist in cleaning. Kuvira walks in with Baatar Jr, asking what happened and Varrick explains that he is shutting down the project due to the conscience he has grown. Kuvira orders him to continue the project, but Varrick still says no – Kuvira threatens to drop him over the train tracks only for Varrick to agree to continue working on the project.

We see Asami with her father – she asks him to stop writing her letters and doesn’t want to see or hear from him again. He explains that he can’t ask for forgiveness however, she is the best thing that he ever created and Asami walks away in tears. We see Asami in the park watching a father and daughter play Pai Sho only to start having feelings about her father again. Asami returns to the prison, and explains to her father that she will try to forgive her and they start to play a game of Pai Sho.

Bolin is with Kuvira and Baatar Jr, who is full of excitement learning that he has joined the inner circle. Kuvira asks Bolin if he can speak to Suyin to convince her to sign a treaty – Bolin is concerned the prescene of troops will give the wrong message. Bolin meets with Suyin, only to find Opal who is mad at him for choosing sides. A dialogue begins – with both sides attacking each other for choices they have made and the way they run things. Suyin refuses to sign a treaty and Kuvira gives her an ultimatum – sign the treaty within 24 hours or she will launch her army.

Korra arrives at Zaofu and explains she wants to stop Kuvira however she will not go into the avatar state and destroy her troops because that is the old version of her. Suyin explains the story of Kuvira, how she was “a smart, natural leader who quickly rose through the ranks” – a rift between Suyin and Kuvira occured when Suyin refused to unite the Earth Kingdom. As a result, Kuvira left with Zaofu’s security force and wealthiest citizens and united the majority of the Earth Kingdom into the Earth Empire. Korra says she wishes to speak with Kuvira so she can be reasoned with – Suyin advises her that cannot be done. Korra meets Kuvira, asking her to back down and Kuvira explains to her that that will never happen. Kuvira agrees to a temporary truce until Korra speaks to Bolin.

Back with Kuvira, Bolin learns of the “other ways” that Kuvira uses to convince people to be united to her empire – Kuvira explains that they are hard truths and Bolin will have to learn to accept them. Bolin says to leave Zaofu alone, only for Kuvira to attack Bolin’s loyalty, Bolin is scared and confirms his loyalty with Kuvira. Varrick is back on the train with Zhu Li panicking that he is running out of air when Bolin arrives saying he has something to tell him. Varrick says he has something to say as well and at the same time they say “KUVIRA’S CRAZY!” and they escape from the train. Bolin, Varrick, and Zhu Li escape in some mech suits and while they are debating on what to do they get attacked by Baatar Jr. Some shenanigans go on and Bolin loses his mech suit and Varrick indirectly destroys Zhu Li’s suit. They are captured by Baatar and returned to Kuvira and she orders them to sent to the re-education camps and Varrick to spirit vine project. Kuvira wants Varrick to weaponize the the project immediately. In a surprise moment, Zhu Li dedicates her loyalty to Kuvira after years of abuse from Varrick – ordering the guards to take him away.

The episode ends with Korra learning that Suyin is sneaking into Kuvira’s camp at night to end the war before it even begins.

In this episode, we finally see Korra back in action and what’s she willing to do to defeat the next big bad – she’s taking new steps towards solving conflict through negotiation and not her fists. It’s a first for Korra and we will see how well it works out for her – Kuvira seems determined to go to war with Zaofu regardless of the cost. Will Korra go into the Avatar State and wipe out Kuvira’s force or will she find another way? Only the next episode will tell!