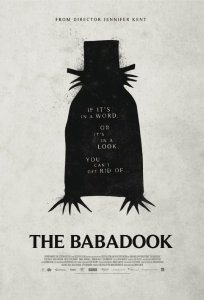 The Australian horror film, The Babadook, has more on its mind than simply scaring its audience. It also illustrates some of the pitfalls of parenthood, and on both ideas, it largely succeeds.

Written and directed by Jennifer Kent, The Babadook introduces us to disheveled widow Amelia (Essie Davis), whose six-year-old son, Sam (Noah Wiseman), is more than a little unruly. Amelia’s husband is killed in a car accident while transporting her to the hospital to give birth. Because of this, Amelia’s feelings toward Sam are, at best, ambivalent.

It doesn’t help that Sam, who wants to be a magician, is obsessed with fighting monsters and throws a lot of tantrums. One of the more terrifying things in the film is the sound of Sam’s constant shouts of “Mom! Mommy!” whenever he wants Amelia’s attention. The resigned look on her face will probably resonate with a lot of parents.

Amelia is lonely, her work at a senior residence is unfulfilling, and she gets no help or companionship from her sister, Claire (Hayley McElhinney), who is tired of Amelia’s depression over her dead husband and also her insistence on celebrating Sam’s birthday the same day as Claire’s daughter’s birthday instead of his own date. It’s the coming of Sam’s seventh birthday that triggers the events of the film. Sam’s complaint of “She won’t let me have a birthday party, and she won’t let me have a dad!” is like a dagger to Amelia’s heart.

It’s not that Amelia’s a thoroughly bad mom, although her emotional distance may register that way with some. It’s that she’s overwhelmed to the breaking point. One night during reading time, Sam pulls an odd book called “Mister Babadook” off the shelf; Amelia doesn’t know where it came from, and she can’t finish it because it’s too scary for Sam. It’s too late, though; the titular monster has been unleashed on the household.

But just what is that monster? Is it the scary thing under the bed? The one in the closet? A screaming, needy child? Or a mother’s inability to love that child? Is Amelia really the monster here?

The film plays with this conceit throughout, aided by a good performance by Davis as the unravelling Amelia. I frequently found myself engrossed in the proceedings, even when nothing particularly frightening was going on. Kent makes effective use of sound (especially insect noises) and lighting to add to the tension, particularly the shots of Amelia going to sleep and waking up what seems like mere seconds later. She frames her shots beautifully as well (see the picture of Sam and Amelia at the kitchen table). The illustrations in the “Mister Babadook” book are more than a little unsettling, as is the ambiguity of the ending. The creature design probably works better on the big screen than small, but I appreciated the novelty of the imagery.

The Babadook has also effective scenes of tension and monstrosity, whether the Babadook is looking for a way inside the house or lurking in the shadows. Seeing a simple hat and coat probably hasn’t frayed nerves this way since Freddy Krueger hit the scene. Check out the trailer below and then see the film for yourself when it comes to big screens and small (via VOD) on November 28, 2014 in the United States.

Désirée I. Guzzetta is a freelance writer and poet who loves movies, books, music, and nerdy things, not necessarily in that order.
Previous “Free” Games for November
Next Wolves Screening Review