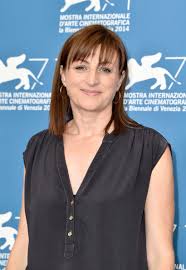 It’s essentially a love story about two people who are lost so-to-speak, never really fitting in, but somehow find each other. The film has an authenticity that is unique thanks to Mann’s writing, incredible scenery and accurate depiction of life on the railroads as a struggling musician.  The opening sequence is breathtaking, catapulting the audience into a glimpse of another world.  The world of life on the rails.

The talented director was inspired while in Austin after speaking at a panel about her film South By Southwest. The sound of folk music hearkening back to her days growing up in the small Indiana town of Dayton, with a population of only 900, caught her attention and led her to Nick Hans’ band- street musicians who live on the road, train hopping.  After speaking with the band, Mann was fascinated and knew she wanted to tell their story.

One of the best things a great director does, that ultimately separates them from the pack, is researching the subject of their film.  Even if it means spending time jumping trains! It’s a whole subculture which Mann really wanted to bring to life on the big screen, as well as make it as close to reality as possible.  Of course train hopping is illegal, however it was incredibly crucial for her to experience it first-hand. After a little convincing, together with the trust 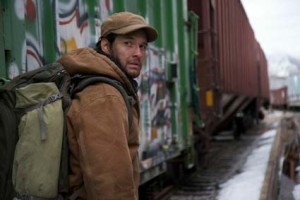 she had built with Hans, he did take her on a short, less dangerous route.  Like in the film, she ate sardines out of a can and learned they make coffee using a Sterno.  “I  couldn’t finish the screenplay unless I understood what it is. I didn’t want it to be fake.  It was an amazing experience and I’m really glad I did it.”

Although the original film was to be set in Indiana, Mann quickly changed her mind once she saw how gorgeous Utah is.  “I wanted to make sure visually there was infinite vast amount of space, beautiful skies and long roads that go on forever.  Cinematically it was important, [as] Ryan is on the rooftop looking over the horizon thinking about where he was going next.”  There were many amazing locations to choose from, but Mann’s main concern was to pick a location that served the lighting.  It was a priority.  “I chose locations where I knew natural light comes in, like in the [scene at] the lawyer’s office.  It gave more time to the actors” instead of using the time setting up lighting.

The music in the film is a mix of 24 eclectic songs, which includes early-American known folk songs and some not so well-known by unknown artists. My favorite song is the one at the end of the movie called “Southbound”, that we see Ryan writing throughout the film.  Interestingly it is a song written by Hans himself, who also acted as a consultant and composer, writing some of the songs for the movie.

The characters Jackie and Ryan, played by Katherine Heigl and Ben Barnes, are deeply layered, flawed in their own ways.  However, they immediately draw you in, making you care about their lives and what they’re going through. Though individually they seem to be on separate journeys, both are in a sense, trying to find where they belong. 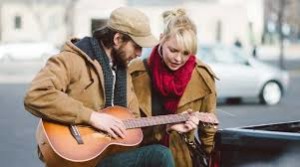 Jackie thought it was being a big music singer in New York City, married to man she doesn’t love.  Ryan never seems to want to settle down or put his vagabond ways to rest as he bounces from city to city on the rails, writing his music along the way.  Everything changes when he meets Jackie, the same way Mann met Hans, singing on the streets trying to earn a buck for his next road trip.  The two immediately feel a connection and from there, each become the others safe haven.

In casting the leads it was important to find actors who could really dig deep and come off genuine.  Mann immediately tapped Heigl, whom she previously hoped to work with on a different movie.  When that didn’t happen, she sent the script and within a couple of days Heigl accepted the role, then led Mann to Barnes.  She couldn’t be happier with the dynamic duo as their chemistry jumps off the screen in spades.  “I love the chemistry they have together. Both are such thoughtful actors and generous in their presence”, Mann describes.  She went on to explain that in casting Jackie, she needed “someone who could have been from Utah but didn’t really belong there and also live in Manhattan, but not belong there.”  After leaving her estranged husband with her ten year old daughter, she has no home, nor does she know where she’s going.  “It’s a tricky, subtle quality to play and I think Katie did a fantastic job with it.” Similarly, Ryan has no home or any idea where he’s going next.  This character was tricky in that the audience has to believe he’s a good guy.  “I knew I needed to find someone who clearly had a heart of gold, not smarmy, but street smart, [so] when you looked in his face you can see warmth and honesty”, Mann reveals. Barnes brilliantly achieves this, giving Ryan just enough edge to believe he can live a tougher life hopping rails, but with a softness which shines through in his sweet disposition and caring ways.  Interestingly though his character plays the guitar, Barnes did not! Of course both Heigl and Barnes have beautiful voices, which fit the tone of the characters. 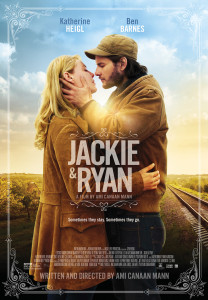 One of my favorite moments in the film is how Jackie sort of takes on Ryan’s mentality as she makes the trek back to New York to deal with her soon-to-be ex.  While taking a bathroom break during her drive, she gazes into the mirror and asks the same question Ryan does, “Where I am I going and how am I going to get there?” It is a moment that I think we all can relate to in our own lives and brings everything full circle.

The entire country is in such a state that many are just barely able to survive on a day-to-day basis.  Financially we are in a downward spiral, indebted to other countries as the national deficit continues to grow at an unprecedented rate.  While the film is a love story fraught with struggles on many levels, Mann discloses that her upbringing in Dayton, then move to Lafayette near Purdue University, influenced this film’s deeper meaning.  She explains that every time she returns to her hometown, she observes how the economy has crippled many in the mid-west, people who live in Indiana, Iowa, Wisconsin.  In a subtle way, Mann wanted to “ask ourselves as a country, where are we going next?  How are we going to get there?  How did we get in the recession and what were the serious decisions that put us in this place? Can we take a step back from it and think really carefully where we want to go next and what the best way to proceed forward is?”

Though she originally planned to be a photo journalist (at the age of 11), an occupation to channel her passion for still photography and writing, it was being on her father’s set that ignited her path to direct.  “I’ve been really fortunate”, she admits.  “I had the good fortune as a teenager being on set, working with my dad and Robert Redford from the outset.  [They were] really incredible mentors and all of them influenced the craft of film-making.” One of the many things she learned from her father, as well as Redford, was how to tell a story.  “They taught me that you need to own your story and find your own way to tell it.”

Jackie and Ryan is set to be released in theaters across the country including New York, Los Angeles, San Francisco, among other cities.  Mann’s final thoughts to entice movie goers?  “Ben and Katie do a fantastic job, a beautiful performance and it’s really worth seeing the chemistry they have together.  They lose themselves, so you don’t feel like you’re watching Katie and Ben, you’re watching Jackie and Ryan.”

Chrissy is the founder of The Fan's Voice, producer and host of The Fan's Voice on Blogtalk Radio, Host of X-Files Addicts & Headless Podcast for Southgate Media Group. The Fan's Voice covers prime-time and online television shows, interviewing actors fans love from television, movies and online scripted serials. She is also the host of Hollow Hangout, a weekly video chat with a panel of hard-core Sleepy Hollow fans on YouTube. She currently writes for The Nerd Element, Blogcritics and Examiner, covering events in prime-time and web series such as Paley Fest, Comic Cons, Daytime Emmy's, Indie Series Awards. She is a huge fan of Sleepy Hollow, The X-Files, Star Wars, etc...Chrissy is also writing her first mystery/thriller novel, set to be released online later this year, the first of a series "The Kirsten Kelly Chronicles"- 'The Mystery of the Gold Coin'. In her free time she is an amateur Paranormal Investigator.
Previous TVTalk with The Nerd Element Ep 79: Bad Lily
Next TVTalk with the Nerd Element Ep 80: #RaveWolf