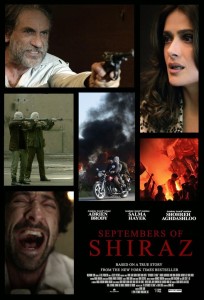 Septembers of Shiraz stars Adrien Brody and Salma Hayek-Pinault as a married Jewish couple during the 1979 Iranian Revolution and the struggles they went through as a result of it. The movie is based on a book of the same name, was the critically acclaimed debut novel by Iranian American author Dalia Sofer, whose family escaped from Iran during the revolution in 1979.

The film started with the introduction of the family having a party for their son who is about to go to Boston to attend a private school. The next scene opens with Isaac (Adrien Brody) at his job as a gemologist/jeweler, when revolutionaries come to arrest him. A majority of the movie focuses on the torture (both physical and psychological) Issac goes through at the hands of the guards while his wife, Farnez (Salma Hayek-Pinault) tries to get information about him and his whereabouts, but is unsuccesful.

Eventually thanks to the semi-caring head of the prison he’s being held in, Issac manages to get out, when he agrees to give all his fortune to the revolutionaries. Once he’s out he and his wife and daughter plan their escape from Iran to Turkey via the mountains. To pay for the trip we find out Isaac had hidden a few loose diamonds at his work (which had been ransacked by one of his employees to “hide everything for safe keeping”). There were a couple of tense moments in the escape that make it look like they will not escape from Iran, but in the end they do make it.

Overall, I found the movie to be very good, and the acting (both by the main cast, as well as the supporting role played wonderfully by Shohreh Aghdashloo) was top notch