Doctor Who: The Witch’s Familiar aka CLARA LIVES! (and I guess Missy too or whatever)

Previously on Doctor Who…the world as we knew it came to an end. The Doctor was heartbroken as he watched Missy and Clara Oswald be exterminated by the Daleks. The TARDIS, likewise, was destroyed. OR WAS IT?

Clara is fine. Well okay, she’s not fine. She’s hanging upside down watching as Missy sharpens a stick and tells a story about the Doctor. 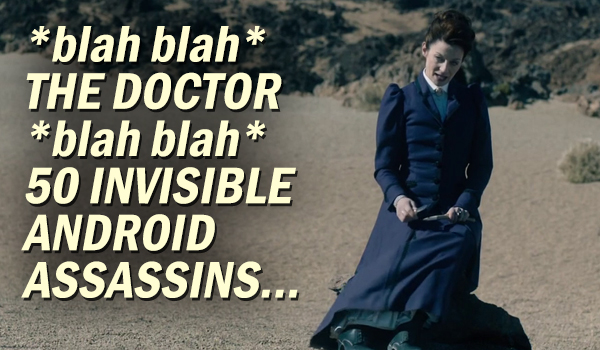 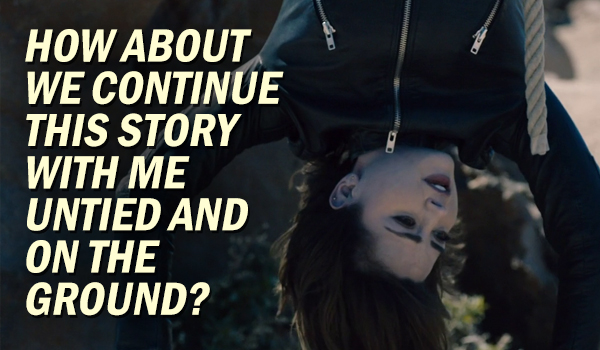 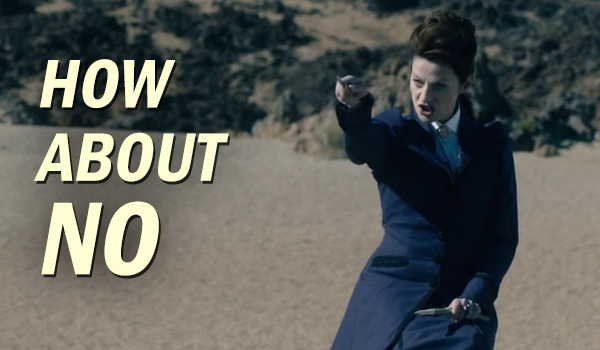 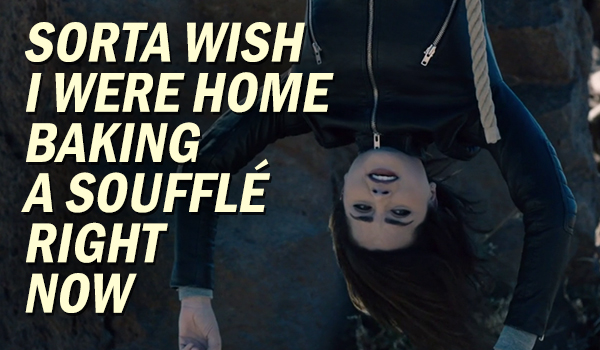 Long story short…Missy is telling Clara how they escaped from the inescapable Dalek stronghold by using an example of a similar hopeless situation from the Doctor’s past. I’m a little fuzzy on the details but essentially it’s because this is their show and if they say Time Lords can factor a billion gazillion calculations all at once with a conveniently swiped android teleportation bracelet, well then, there you go. (“I’m the Doctor, just accept it” is a phrased used later in the episode but I think that works well here too.) 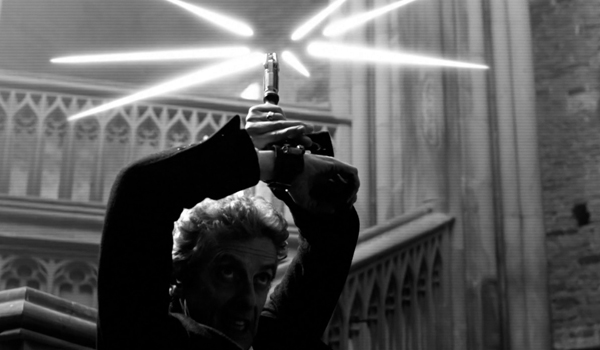 Missy did something similar with the vortex manipulators and voila! They’re saved. But why, Missy presses, does the Doctor always survive? Because he assumes he will. So him making a will and assuming he’ll die is not a good thing at all. And so it’s Clara and Missy to the rescue! (Add that to the list of phrases I never thought I’d type.)

Meanwhile, Davros is monologuing whilst the Doctor is experiencing a bit of a freak out. The Daleks aren’t doing much better until they see Davros is on his way to them. Except, the thing about it being Davros? Not so much. 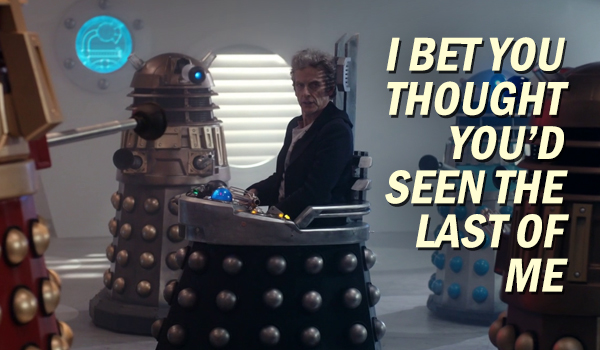 Clara and Missy decide to infiltrate the city using the sewer system as it’s perfectly safe and nothing horrific ever happens in a sewer. Oh and it’s alive. Slightly. Because the Dalek word for sewer is the same word they use for graveyard. But no worries! 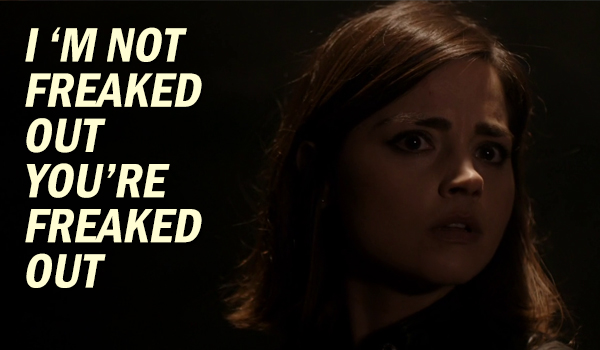 From the safety of his heavily-shielded Davros chair, the Doctor makes his desperate demand very clear; so clear it’s on the loud speakers so even Missy and Clara can hear it vibrating off of the disintegrating, gooey Dalek walls surrounding them: I want Clara Oswald. 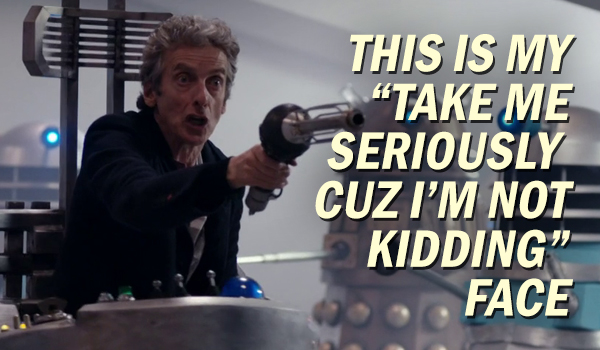 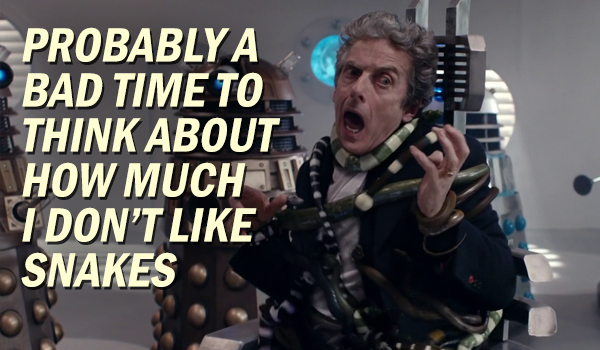 Missy lures a painfully gullible Clara into a trap and cuffs her to the wall. She’s the bait to catch and kill a Dalek using the Dark Star alloy she got from the Doctor who knows how long ago.
Sure enough, a Dalek comes to investigate the disturbance and Missy pokes its shell full of holes, allowing the angry and super crazy wall Dalek sludge to ooze in and blow it up. 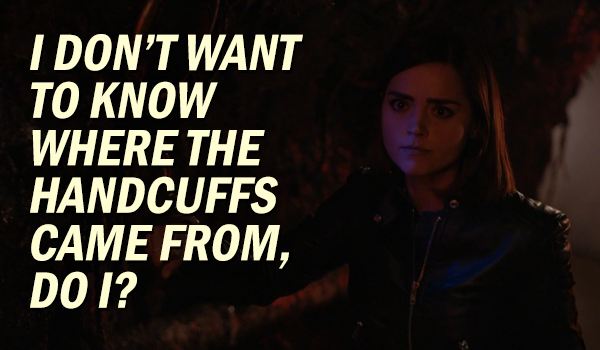 The Doctor awakens from a Davros-as-a-boy-in-a-field-of-handmines nightmare only to find himself in a nightmare of a different making with the all grown up psychopathic version of the child. Davros shares two important points to the Doctor: 1. he’s connected to all Daleks and feeds off of their energy and 2. his children carry a genetic flaw, they respect their maker. The Doctor sees the cables that feed him, and Davros lays his trap. Surely the Doctor knows that what can feed him life can be perverted into a mechanism that issues death to all the Daleks on Skaro. Then he too can choose genocide! 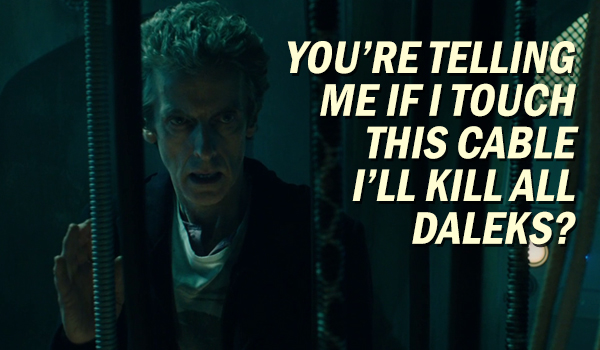 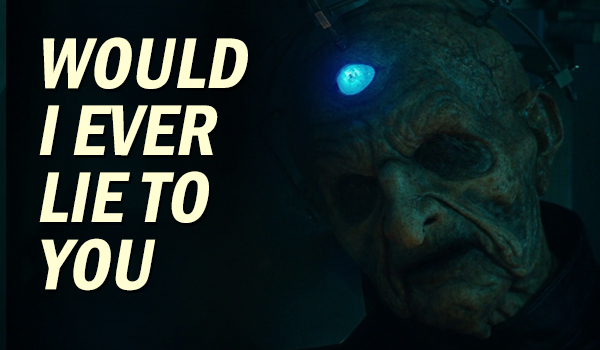 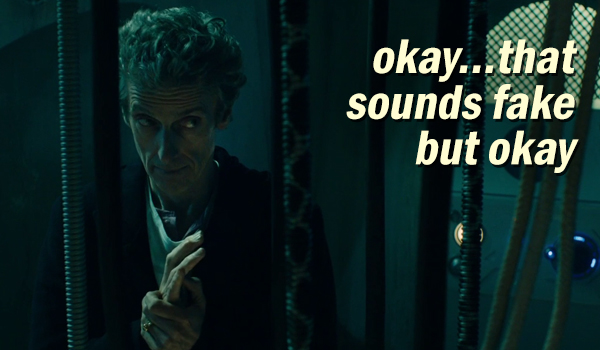 For some reason though, the Doctor isn’t all that keen on this idea (can’t imagine why) and he reveals that he came to Skaro because Davros was sick and he asked him to be there. Wait, did I miss a BFF moment between these two? Did they braid each other’s hair and give each other a friendship bracelet in some previously unseen episode? Because as far back as my memory goes, their interactions have always been, uh, negative (to say the least).

Davros sees it now…it’s the Doctor’s compassion, a trait Davros has always been known for himself (not really). Actually, he views it like a cancer that will one day kill the Doctor.

Back in the sewer, Missy has removed the remains of the now dead Dalek and talks Clara into getting into its empty shell and pretend to be a Dalek. 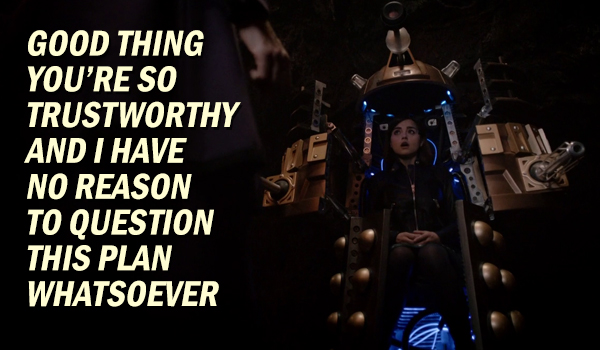 Davros wants the Doctor’s confession and is surprised, like the rest of us, when he sees the Doctor reaching, not for his confession but a pair of sunglasses. That’s odd of course because anyone watching this episode will note how friggin’ dark the lighting was throughout. 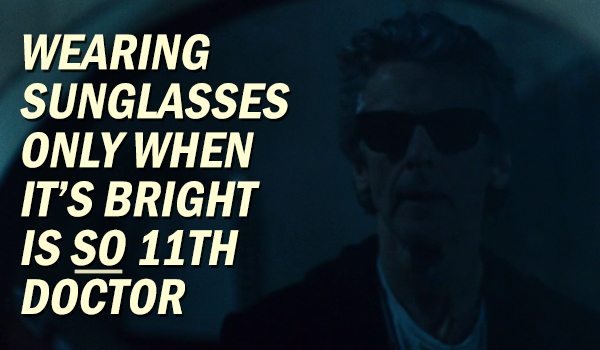 Missy and Clara-as-a-Dalek are stopped by an actual Dalek who wants to know why Missy is among the living and Missy snarks her way out of being torched on the spot. Meanwhile the Doctor is being pressed about his inner most thoughts and surprise! He admits he saved all of Gallifrey and DOUBLE surprise! Davros is happy for him! 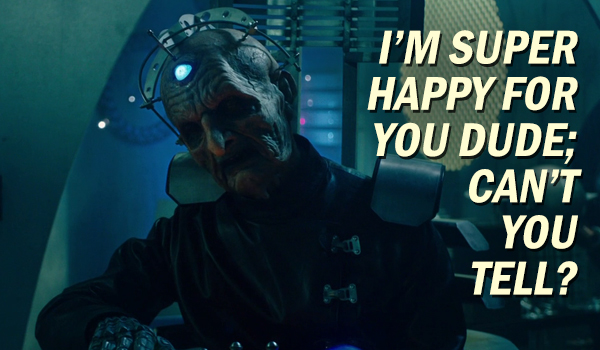 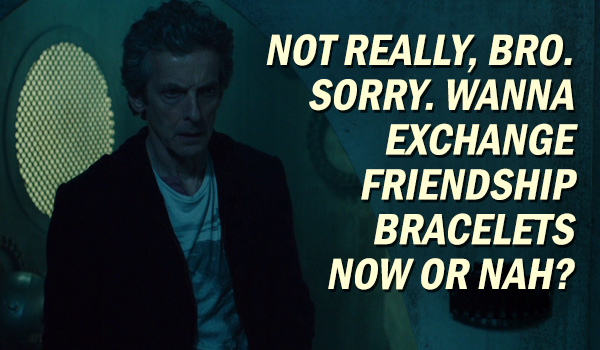 The touching moment continues, literally, as Davros lays his hand on the Doctor and wants to see him with his own eyes; and Davros speaks as a man having an existential crisis and cracks jokes about the Doctor. Oh Davros, you psychopathic mass murdering demon spawn from Hades; such a kidder you are!

And oh, how he longs to see the sunrise with his own two eyes, just this one last time. If only that were possible. The Doctor takes the not so subtle hints and rushes into action with a brilliant idea that Davros would not expect at all. He’ll give him some of his energy! Just enough to grant Davros his last wish. Such generous hearts he has. I’m certain Davros will totally respect such thoughtfulness, right? 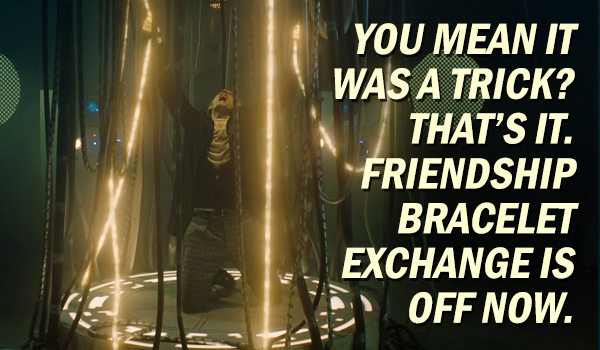 As Davros has the Doctor’s regeneration energy siphoned from his body, Missy and Dalek-Clara arrive at the Dalek clubhouse. But just as she’s about to give Clara up, they all shut down. 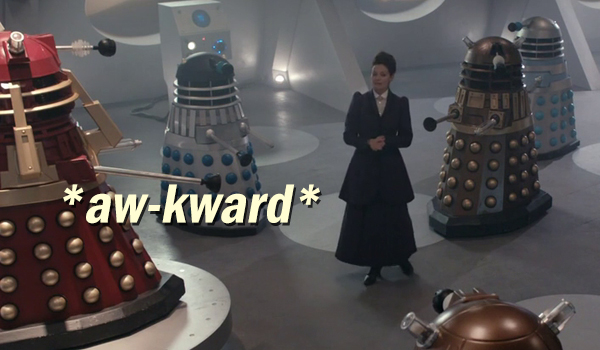 Moments later, the Daleks start glowing, which Missy takes to be a bad sign and rushes out leaving Dalek-Clara behind.

The Doctor begs for Davros to stop, but he’s busy monologuing again; this time about a Gallifreyan prophecy that presumably is about a hybrid between Daleks and Time Lords. Davros believes this is why the Doctor has been on the run as long as he has, so as to escape his prophetic role. Thankfully though, as the pain seems too great, Missy rushes in laser gun at the ready and starts blasting; thus freeing the Doctor from Colony Sarff’s control. 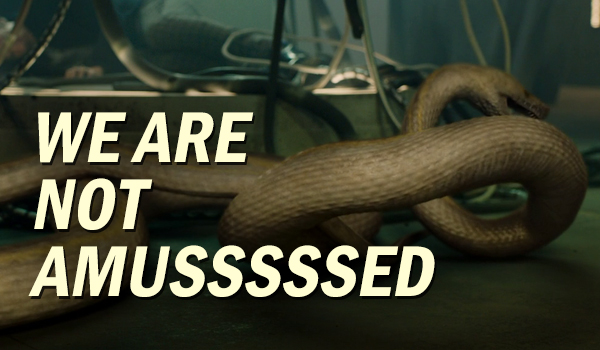 The Daleks wake up and begin praising Davros for his genius. Davros himself is mighty impressed with his final victory and starts bragging about how awesome he is. But we, and Missy, can see it in the Doctor’s eyes as he rushes over to pick up his confession dial and starts a countdown from 3. Things aren’t as they seem. Davros might have seen it too were he not so full of himself. Hey villians: make sure you actually have succeeded before you start bragging about your success. And that’s a tip from me to you.

The countdown hits zero and there’s a BOOM! See, the Doctor knew what Davros was doing all along and while Davros was counting on the Doctor’s compassion to give him access to his power, the Doctor was counting on Davros’s arrogance and relentless pursuit of power. Davros got his regeneration power for all the Daleks, including the gooey sewer Daleks who are now super angry and super strong and crumbling the city around them. 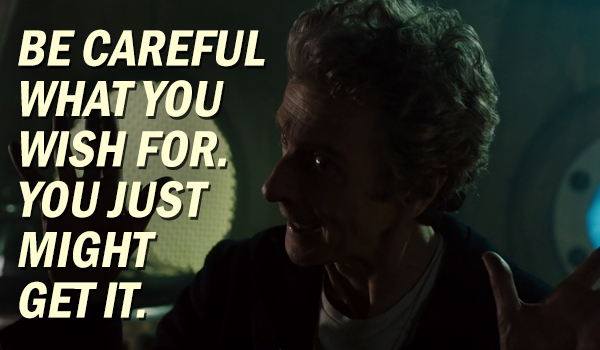 The Doctor searches for Clara and comes across a confused Dalek who Missy claims killed Clara. She urges him to kill it, knowing full well it’s really Clara. Thankfully, the Doctor isn’t a total fool and sees the truth just in time when the Dalek asks for mercy, something the Daleks should have no understanding of. 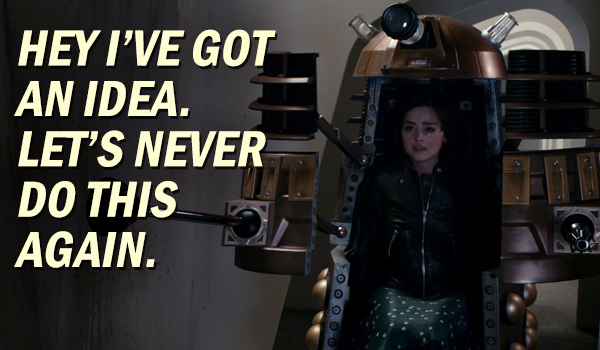 The Doctor is not amused by Missy’s harmless little prank that almost cost Clara her life (what a stick in the mud!) and tells her to run away now. I’m guessing that “touring the cosmos in TARDIS with the Doctor” date she’s been planning is on hold for now, yeah?

The Doctor and Clara head off to find the TARDIS as the ground crumbles around them but he can’t help but drop a pretty puntastic line, “Dalek Supreme, your sewers are revolting!” *rimshot*

The Daleks, who clearly have no sense of humor start firing away but all the shots are somehow deflected. It’s the TARDIS, which is currently in dispersal mode (some sort of defense mechanism) and can totally be reassembled using sonic technology. But not a screwdriver, that trend apparently ends after 2,000 years (and 50 plus years on tv, but I’m not bitter or nothing). No, now the new cool thing is…wearable tech! 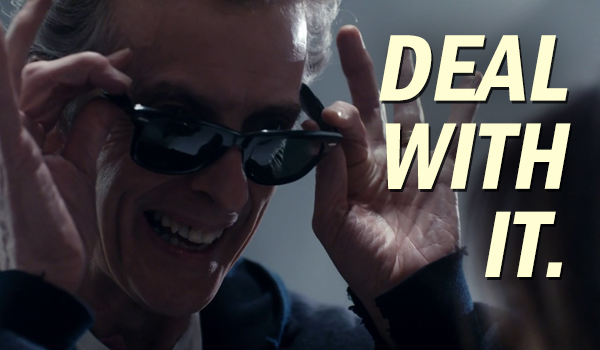 The TARDIS assembles around them and they’re off…leaving Missy behind to deal with a passel of irked Daleks. But she’s Missy so I don’t count her out. Yet.

But back to the Doctor, who’s still puzzling about how the Daleks could have the word “Mercy” in their vocabulary. And then it hits him. He rushes off and moments later, he’s back where he started with a scared little boy in a field of hand mines. But this time he knows the truth. If he doesn’t save Davros, then countless millennia later, Clara Oswald would die trapped in a Dalek shell, unable to communicate who she is. To save her, he must save Davros and teach him the meaning of Mercy.

All in all this was a solid episode. I give it 4 1/2 sonic….whatevers.

That reminds me of my one and only complaint: I want my sonic screwdriver back!

If it's scifi, fantasy or superhero related, I'm probably watching it. Proud to be reviewing Killjoys, The 100 and Supergirl for The Nerd Element!
@theuberfan
Previous Chrissy’s Corner: Actress Kim Delaney Sheds Light on PTSD
Next Fantastic Beasts and Where to Find Them, Preview Reviews for Warcraft and Alice Through the Looking Glass, Spectre Reviewed