Conan O’Brien is once again returning to San Diego Comic-Con with 4 tapings (Wed/Thurs/Fri/Sat) with the shows airing Wednesday/Thursday/Saturday, and Sunday of Comic-Con (July 20th, 21st, 23rd and 24th) from the Spreckels theater in Downtown San Diego. H/T to SDCCBlog.

Today they announced the guest lineups, and once again they are some big names.

Thursday: The weird one himself, “Weird Al” Yankovic (who is in San Diego for a concert later that night, tickets are still available here).

In addition, Funko once again made 4 different Funko Pop! figures just for Conan. This year they are Superman, Stormtrooper, Ghostbuster and a Suicide Squad Joker. From Funko’s press release they will be given away to audience members following each San Diego show, as well as directly to Comic-Con attendees each morning. Supplies are limited, and details will be posted on the Comic-Con website. The figures will not be available at the Funko booth. No further details on how/where they will be given away at Comic-Con, but it will probably be at the TBS booth (#3629) 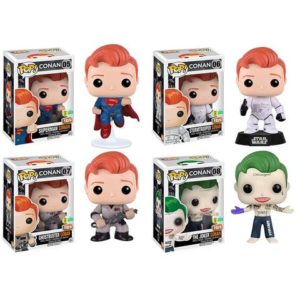 Watch the video here of the unveiling of the figures.