Today it was announced by Discovery Family Channel that Comedian Patton Oswalt would be voicing a character in a new episode of My Little Pony: Friendship is Magic. Full details and picture below courtesy of their press release. 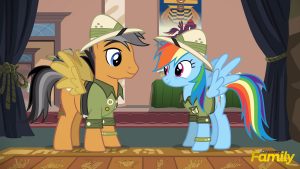 DISCOVERY FAMILY CHANNEL CELEBRATES INTERNATIONAL DAY OF FRIENDSHIP WITH MY LITTLE PONY STARTING JULY 23 WITH DAILY MARATHONS OF MY LITTLE PONY: FRIENDSHIP IS MAGIC, FAN VOTING AND THE RETURN OF SEASON 6

– Festivities Lead up to the Mid-season Premiere of “My Little Pony: Friendship is Magic” Featuring Guest Star Patton Oswalt on Saturday, July 30 at 11:30a/10:30c

–– Parents Can Visit DiscoveryFamilyChannel.com/Friendship with Their Kids Beginning July 18 to Vote for Their Favorite Friendship Episodes and Watch the Winners on International Friendship Day –
(Miami, FL) – In celebration of International Friendship Day and the return of new episodes of MY LITTLE PONY: FRIENDSHIP IS MAGIC on Saturday, July 30, Discovery Family Channel is sharing the magic of friendship all week long during “BFF Week with My Little Pony” beginning Saturday, July 23. Each day throughout the week at 10a/9c, viewers can catch classic MY LITTLE PONY: FRIENDSHIP IS MAGIC episodes that celebrate the importance of friendship and the special bond between best friends. Additionally, from Monday, July 18 through Wednesday, July 27, fans can vote for their favorite top three episodes from the past two seasons at DiscoveryFamilyChannel.com/Friendship.

Fan favorite episodes will air prior to the mid-season premiere beginning at 10a/9c.The fan voting leads up to the return of MY LITTLE PONY: FRIENDSHIP IS MAGIC on Saturday, July 30 at 11:30a/10:30c with a special episode featuring guest star Patton Oswalt. In the premiere episode, Stranger Than Fan Fiction, Rainbow Dash attends the Daring Do Convention in Manehattan and meets a pony named Quibble Pants (voiced by Patton Oswalt) who despises Daring Do as much as she loves it. The two of them get wrapped up in a real life Daring Do adventure and must settle their differences if they have any chance of surviving the convention.

Additionally, fans can join in on the fun and celebrate the magic of friendship by performing random acts of friendship inspired by the core cast of characters from MY LITTLE PONY: FRIENDSHIP IS MAGIC and encouraging others to “friend it forward.” Fans are invited to share their completed acts of friendship via their social channels, tagging posts with #FriendshipisMagic and #FrienditForward.Celebrating its sixth season, MY LITTLE PONY: FRIENDSHIP IS MAGIC follows the magical Princess Twilight Sparkle and her trusted assistant Spike, who live in Ponyville in the enchanted land of Equestria, along with her colorful pony friends – honest Applejack, generous Rarity, kind Fluttershy, loyal Rainbow Dash and fun-loving Pinkie Pie. Together, they teach one another valuable lessons about the most powerful magic of all –the magic of friendship. MY LITTLE PONY: FRIENDSHIP IS MAGIC is produced by Hasbro Studios for Discovery Family Channel.