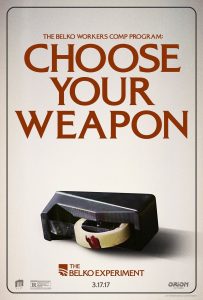 he dread starts early in the new horror extravaganza, The Belko Experiment, a self-assured, horrifying, and occasionally horrifyingly funny, outing. In fact, I enjoyed this film unabashedly—if you can call cringing in your seat for nearly the entirety of the 88-minute runtime enjoyment. Between James Gunn’s smart, taut script and Greg McLean’s assured, well-paced direction, the horror is relentless, bloody, and fun.

Set in Bogotá, Colombia, The Belko Experiment starts with government workers heading to Belko Industries, which has an office building in the most remote location they apparently could find (red flag #1). It’s also revealed that the employees have “tracking chips” implanted in their skulls because Bogotá is known for kidnappings, according to Belko’s human resources (red flag #2). On this particular work day, a whole new set of guards are checking everyone’s IDs before letting them enter the gated property, and they’re both unfriendly and militaristic (red flag #3).

In short order, we meet Mike (John Gallagher Jr.), who is easy-going and in love with Leandra (Adria Arjona), who’s practical and strong. She’s also being harassed by Wendell (John C. McGinley), a supervisor who clearly doesn’t know what “No” means. Mike reports to Terry (Owain Yeoman), a family man who seems compassionate, and they’re all overseen by the pragmatic CEO, Barry (Tony Goldwyn).

It’s a great ensemble cast who all work well together, and they’re able to establish bonds between their characters quickly, which helps because The Voice (Gregg Henry) breaks in over the intercom before anyone can take a coffee break to tell Belko’s employees they have 20 minutes to kill two co-workers or suffer dire consequences. Most of them think it’s some sort of prank, but when the heads of a few random co-workers suddenly explode, the rest realize they’re in deep trouble. Adding to their fear and confusion are panels of impenetrable steel that suddenly seal up the entire building, along with the A/C shutting down.

The employees soon form into groups, with the alpha male supervisors (Barry, Wendell, and Terry) willing to take deadly action, while the more humane people, such as Mike, try desperately to think of ways to save everyone without any more deaths. It’s office politics writ grotesquely large with blades and bullets—and splattered brains.

Gunn and McLean have horror genre bona fides (including Slither and Wolf Creek, respectively) as both writers and directors, and it shows in how the action unfolds (tension on top of tension before a bloody release), and how well the main characters are set up in the beginning so that we care about their ends. The very talented cast turns in committed performances, making the ensuing mayhem believable and at times heartbreaking. Gallagher Jr. (Hush, 10 Cloverfield Lane) is particularly outstanding, while Arjona shades Leandra’s morality enough to make you wonder what she’s going to do from one moment to the next. Goldwyn, McGinley, and Rooker are solid as well. Frankly, everyone in the cast is good, even the people we see relatively briefly before their untimely ends.

The special effects are practical, with a small amount of digital effects used. The practical effects tend to heighten the realism of the deaths; McLean mercifully cuts away from (or provides only quick glimpses of) the most gruesome killings. In other words, the film is gory, but not sadistically so. The tension, however, is off the charts, making the moments of comedy more welcome and the horror more disturbing.

There are also a lot fun, retro touches, along with slogans scattered around the Belko offices that read innocuously enough when you first see them (“Business without boundaries”), but take on ominous overtones later.

The Belko Experiment is one helluva portrayal of social engineering that resonates long after the last image fades and has something for every type of horror fan, I feel. For instance, I walked out questioning my responses to some of the actions on screen, even though I loved the film. For those who prefer text to subtext, there’s plenty to enjoy as well. One thing’s for sure: The Belko Experiment is a bloody good time.

Désirée I. Guzzetta is a freelance writer and poet who loves movies, books, music, and nerdy things, not necessarily in that order.
Previous SXSW 2017 – Part 1!
Next Into the Badlands S2E1 Recap/Review: Tiger Pushes Mountain