Silicon Valley Comic Con (which we attended, you can see our coverage here) earlier this week gave final attendance numbers and officially announced the dates for 2018. More information below and pictures courtesy of their press release. 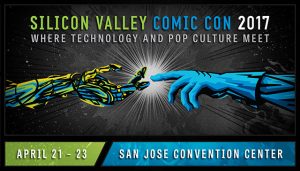 “First and foremost, I’m an engineer, and we’re all about iterations and improvements. We made a lot of changes this year, and we’re happy to see that most worked,” said SVCC founder Steve Wozniak. “Silicon Valley Comic Con is all about having fun and being inspired. From the science fair and the NASA panels to meeting some of my heroes and favorite celebrities, I saw and learned so much. We can’t wait to build this out for next year!”

Official photos can be found at: https://www.dropbox.com/sh/ykbvtk2keuipnld/AABKgyEB7ptePTafSTuEA4Kia?dl=0

To view a full list of SVCC panels and guests, visit www.svcomiccon.com. To inquire about sponsorship, exhibiting or media partnerships in 2018, contact marketing@svcomiccon.com.