Earlier today Warner Bros. Interactive Entertainment and DC Entertainment released a brand new gameplay trailer for Injustice 2. The gameplay trailer features Red Hood (Jason Todd) and you can see it below. He will be part of the Fighter Pack #1 that will be released in June for those players that purchased the Injustice 2 Ultimate, Digital Deluxe or Ultimate Pack editions, as well as bein available for a la carte purchases. More information below courtesy of their press release. 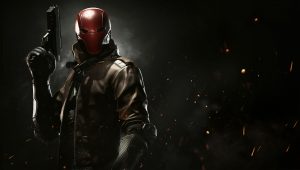 Warner Bros. Interactive Entertainment and DC Entertainment today revealed the first gameplay for the next character to be released for its critically acclaimed Injustice 2:  Red Hood, AKA Jason Todd. Players can see Batman’s second protégé “Robin” turned vigilante in action today in a new trailer. Red Hood will be the first character in Fighter Pack #1 to be released and will be available in June for players who have purchased the Injustice 2 Ultimate Edition, Injustice 2 Digital Deluxe Edition, or Injustice 2 Ultimate Pack.  The character is also available for purchase a la carte.

Developed by the award-winning NetherRealm Studios, Injustice 2 features a massive roster of DC Super Heroes and Super-Villains and allows players to build and power up the ultimate version of their favorite DC characters. The game is currently available for PlayStation 4 and Xbox One.