November is a big month for Hulu premieres and Hulu will be showcasing its November shows at NYCC next month. Future Man and Marvel’s Runaways will grace NYCC with first looks, and behind these scenes stories in two panels brought to you by Hulu. I am personally excited for both of these shows. Seth Rogen’s Future man looks like a hilarious new comedy about a man that travels through time to save humanity. Hulu is a great platform for this comedy as in true Seth Rogen fashion, it is too much for network television. You can check out the trailer below though the trailer is not suitable for all audiences.

As a reader of the comics back in the 2000s, I am very excited to get a glimpse at Marvel’s Runaways. Marvel seems to be expanding its reach on television as it will now add Hulu as a provider joining Netflix, ABC and soon to be Freeform. Runaways centers around teenagers that find out their parents are supervillains, run away and try to come up with a plan to thwart their parents. We still haven’t seen a trailer for Marvel’s Runaways even though it is premiering on November 21, but media reviews have been positive. Could we get a new trailer at NYCC? Are you as excited for these two shows as I am? Let us know in the comments!

Marvel’s Runaways makes a fresh landing in New York as Jeph Loeb, Head of Marvel Television, joins the stellar cast and executive producers Josh Schwartz and Stephanie Savage to let you in on some of the secrets and mysteries of the highly-anticipated, new Hulu Original Series, Marvel’s Runaways. You won’t want to miss this fun-filled panel featuring exclusive footage. And be sure to catch Season One of Marvel’s Runaways when it premieres on Hulu, Tuesday, November 21, 2017.

The Main Stage 1-D Presented by AT&T is cleared between Panels. For full details on how to reserve a seat in a panel on the Main Stage, click here: www.newyorkcomiccon.com/Content/Main-Stage-Clearing/. 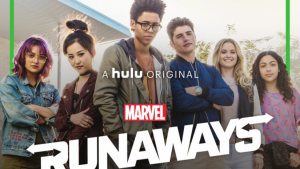 Funko started to tweet out its Star Wars Celebration exclusives today. They are listed below …