Daydreaming above the fray, a solitary figure hovers above National City ready to jump in at a moments notice. That’s the norm for Kara these days. So it’s no surprise she’s there when needed to save a kid in a car and lend Team Sanvers a hand. 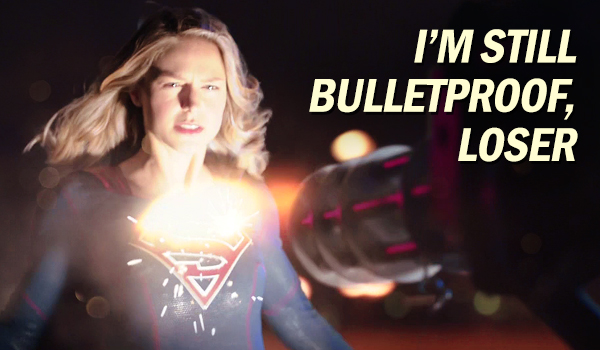 But she takes no joy in it. She’s lost and hiding behind her cape and her alien-ness to escape her pain. I’ve seen some on social media lament that she’s falling apart over a guy but I don’t think that’s it at all. I think losing Mon-El was merely the last straw.

Think about it. In her daydreams, yes she thinks of him but she also thinks of her mother. She’s lost so much in her life and she doesn’t know how to deal with it. So she doesn’t.

Her friends and loved ones each try to reach her but she’s having none of it. When James presses her for an article on the Daxamite invasion she’s way past due on, she snaps and quits CatCo! Granted, he crossed a line using the Supergirl distress beacon to contact her, but still. 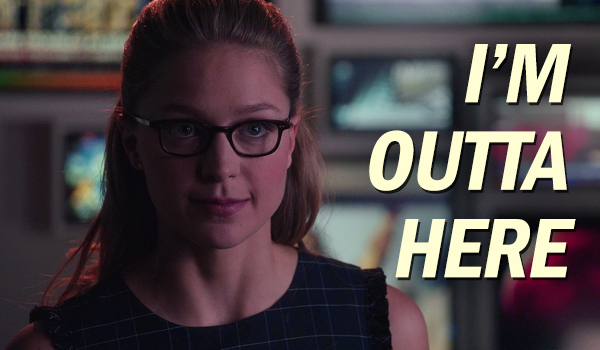 While I’m glad James is taking more of an interest in his career, especially with Cat Grant now the Press Secretary for President Olivia Marsdin and Snapper Carr away on sabbatical, Kara does have a point about James being a bit hypocritical about giving her hero identity more attention than her day job. But only a small point. At any rate, he sees through her cover but doesn’t know how to reach her.

J’onn gets further than most, reminding Kara that it’s through pain that they become strong. She hears him even as she continues to bury herself in her work as Supergirl. 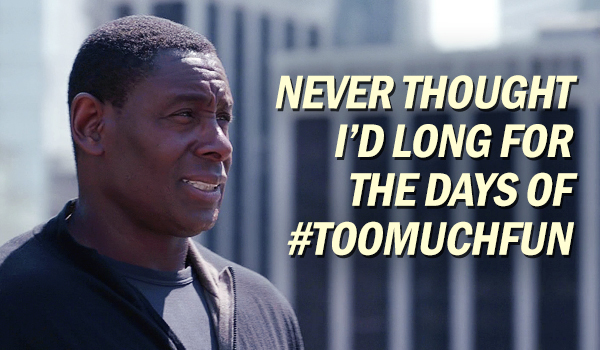 Meanwhile, Alex is frustrated with her sister, and for good reason. Her attempts to get Kara to come back to her because she misses her sister, fall on deaf ears. Kara feels her existence as a human was a mistake because she isn’t human and was never meant to be one. She wasn’t meant to live a mundane life as a reporter, but to save those who needed saving as a superhero.

Honestly this scene is the most painful of the episode for me because the Danvers sisters relationship is so very important to me and it hurts to see them cut off from each other, regardless of the “why” behind the canyon dividing them. 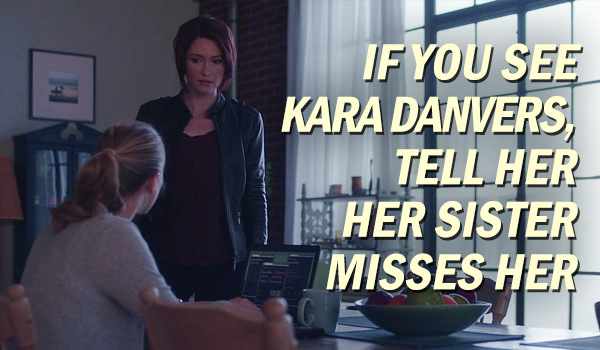 Alex’s personal issues don’t stop with her sister either because she’s engaged…and miserable. Not because she doesn’t love Maggie because she totally does. But “engaged” means “wedding” and she can’t have everyone important there with her on her special day. After a few conversational snafus with Maggie, she finally comes clean about it. And then she comes up with a work around. Yes, it’s true Jeremiah can’t be there for her but perhaps there is someone else who could walk her down the aisle.

No one is more surprised than J’onn when Alex asks him to do the deed. He of course accepts, but not before both of them about dissolve in a puddle of tears. 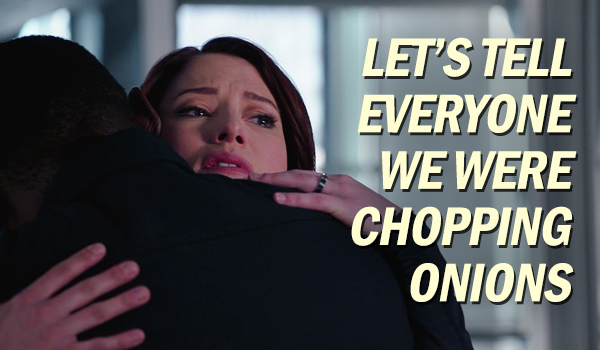 Meanwhile Lena has her own problems in the form of a certain sexist jerk named Morgan Edge. Morgan has big plans for the Waterfront and Lena opposes them, and him. He doesn’t like being called out, especially by Lena Luthor. And he loves poking the bruises of her broken family and insinuating she was actively involved with their criminal activities.

He also has designs on CatCo. As in, he wants to buy it. When Kara finds out, she about flips her lid. Well she would have had she been the Kara we know and love. More accurately, this more Vulcan-like Kara is concerned about Edge’s plans for CatCo. So she goes to Lena and asks her to exert her influence as a shareholder. Lena makes a go of it but true to form, Edge turns the conversation back on Lena and insinuates he’d use CatCo to drag anyone he didn’t like through the mud. 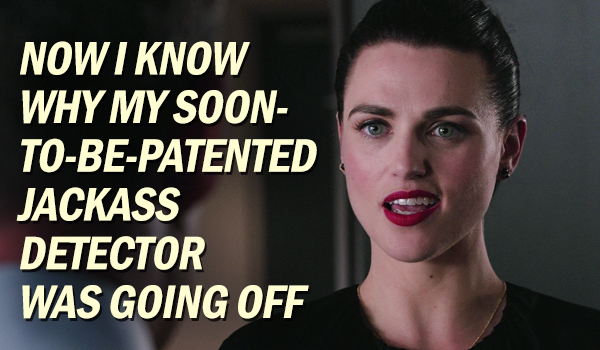 But it doesn’t stop there. Because this same creep is in cahoots with the same fella who caused problems with Team Sanvers at the start of the episode. His name is Robert DuBois aka Bloodsport and they have big plans that they promise no one will see coming. Literally.

Winn however is able to track Bloodsport thanks to his blood (Kara had punched him HARD at the beginning of the ep) and determines he’s ex military. Supergirl heads to the last base he served at and found unconscious guards, a lead-lined warehouse and…an invisible Daxamite war ship! Or really, it found her and opened fire on her and those around her. 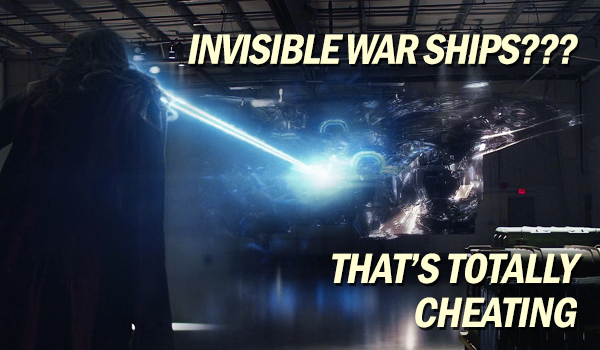 She spots Bloodsport escaping but has to let him go to help one of the soldiers. Now the sense of urgency is rising given the upcoming Girl Of Steel sculpture dedication on the waterfront. (As an aside, this sculpture is WAY better than the one of Black Canary over in Star City. Perhaps Earth-38 can send a few artists to Earth-1 to give them a hand, hmm??)

Kara’s there, but not really. She listens in with J’onn as Lena announces then reveals the new sculpture. But then all hell breaks loose. They’re under attack! But from where? It takes some doing, but Supergirl realizes what the pressure regulators Bloodsport stole from the base were for: an attack coming not from the sky but from underwater.

She rushes down to stop it but not in time to prevent havoc on the Waterfront. Among the many victims, a young woman rushes to save her daughter Ruby who was trapped underneath fallen debris. And lo and behold, she was able to lift it all by herself! I wonder why? 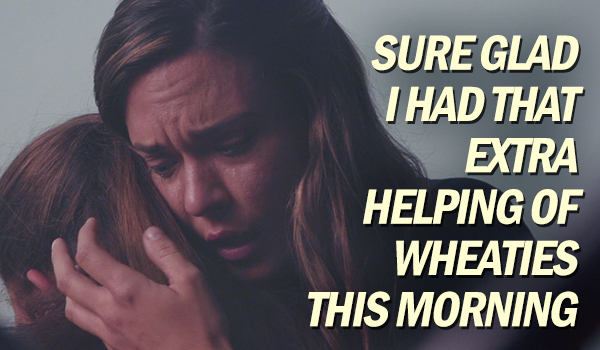 As the attack continues, Alex and Maggie grow increasingly upset because Kara can’t breathe underwater. She’s down there an awfully long time. So long in fact that she loses consciousness. Thankfully dream Mon-El snaps her out of it and she wakes in time to grab the submarine shooting at the Waterfront and lifting it out of the water. She saves the day!

Speaking of saving the day, Lena Luthor makes her hero move: she buys CatCo! She excitedly tells Kara because she needs her best friend’s help on this one. Kara tries to quit and Lena comes up with the perfect answer to that: UNQUIT. Lena’s been walking on egg shells like most of Kara’s friends but in her case, it’s because she feels responsible. She helped create the device that forced Mon-El away. Kara shrugs if off though since in the end it was Supergirl’s choice. So she’s not angry with Lena, she’s just unwilling to fully re-engage in her human identity. So far, at least.

It’s then that Edge enters and Kara exits. He’s outraged and threatens Lena! Like a big ol’ bully, he promises her she has his full attention now. Supergirl has heard quite enough. She arrives on Lena’s balcony and well, she’s got a few threats of her own. She knows he was behind the attack on the Waterfront. He points out she can’t prove anything and, he’s right. For now. But just as his full attention is on Lena Luthor, Supergirl’s full attention is on him. She lets him marinate on this as she leaves him on top of a boat somewhere out at sea. 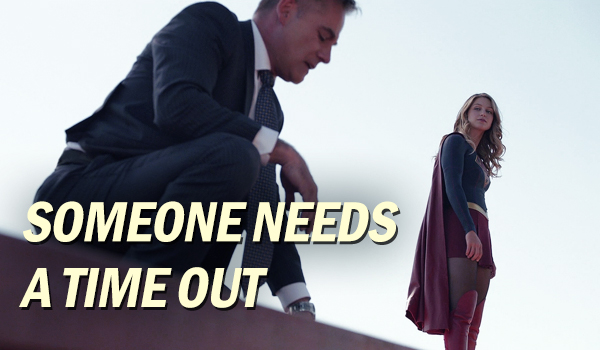 Kara ruminates over Mon-El’s prompting to wake up when she was drowning. And I have to believe she also thinks about James and Alex and J’onn and Lena’s need to have her back. All that and with the threat Morgan Edge poses, this choice is a no brainer for her. It’s time for Kara to come home. She agrees with Lena’s “unquit” plan and decides to return to work at CatCo. She even goes joins the gang out at at bar! Maybe our girl is back after all. Missed ya, Kara.

PS…that closing vision or dream (more like NIGHTMARE) or whatever it was, was what now? Questions, questions!

Girl of Steel was a good start for the season, but not a great one, comparatively speaking. While I gave Kara a pretty wide berth to deal with her loss and refusal to own her pain, I found myself frustrated to the point of irritation with the way she treated her friends and family. And yes, I know that was the point of this story, for her to find her way back to her loved ones, but the journey was so rough as to be too painful for me to enjoy.

If it's scifi, fantasy or superhero related, I'm probably watching it. Proud to be reviewing Killjoys, The 100 and Supergirl for The Nerd Element!
@theuberfan
Previous Riverdale’s Josie and The Pussycats
Next DCTV Episode 79: Zack Snarty