Okay I take it back.

I mean, she’s physically back, she’s not avoiding everyone as much as she had been. She’s participating. But she still exists primarily on the periphery.

Consider for instance, her job at CatCo. Her new boss and best friend, Lena, wonders why Kara’s missing meetings and, you know…generally do what she’s paid to do. Kara however has to rush off regularly to do Supergirl stuff, not that she can tell Lena or anything. Except you know what? She totally could. I wish she would because I just know that’s gonna blow up in her face. 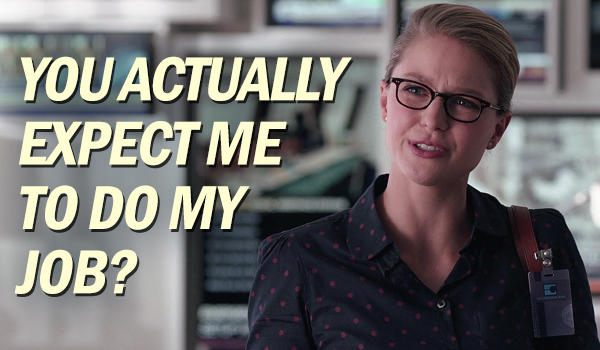 She leaves Lena hanging with a less than pleased James, who had no idea Lena was gonna be so hands on, and meets up with the rest of the gang to deal with a new and weird problem. And no, I’m not talking about Maggie and Alex’s wedding prep dramas. It’s a bank robber who seems to be able to incapacitate everyone. Kara goes to stop her and thinking she’s immune, and soon learns she isn’t. 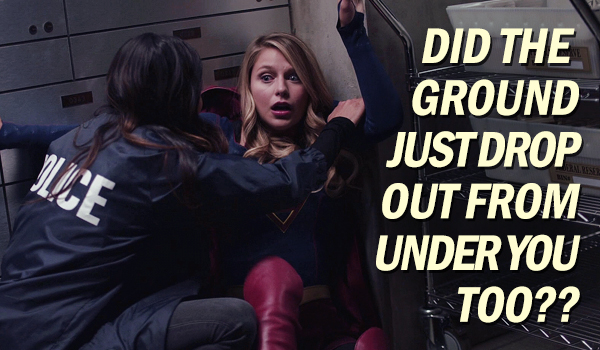 She’s examined and gets a clean bill of health. Even as J’onn warns her he detects psionic activity, she thinks she’s all good. She’ll be ready the next time it happens.

So when another call pulls her away from CatCo to face Psi, she’s ready! Oh wait. No, she’s not. 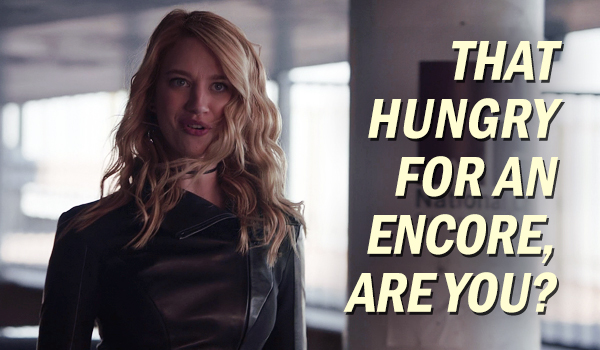 J’onn tries to provide support from afar but Psi takes him out. Kara is left alone and helpless to Psi’s powers. Paralyzing fear overtakes her as she relives one of the scariest moments of her life: her exodus from Krypton.

The gang at the DEO go on a hunt for how Psi’s attacking her victims but Kara already knows. She only tells Winn because she doesn’t want others to worry. Um what? Since when does Kara “Stronger Together” Zor-El believe it’s better to keep her friends and loved ones out of the loop? Seriously. I miss my Kara and I hope she returns to us soon.

Lena’s probably thinking the same thing. At first she tries reaching out to Kara to see if she’s still hurting and needs time, but Kara brushes her off and is rather rude about it. But the thing is, Lena is not only her friend, she’s also her boss. Lena’s actually forced to call Kara out for treating work like a hobby and disregarding her job. And she’s totally right on target here.

Kara heads out to the interview Lena’s asked her to go do when she gets another call from Alex about another bank heist. But before she can get very far, Psi attacks her long distance, or so she thinks. She’s helpless on the elevator floor until a burst of sheer willpower enables her to escape through the roof.

Back at the DEO, Winn gives her the bad news. Psi didn’t attack her in the elevator after all. She just had an epic panic attack. Alex watches Kara skitter away and Winn is left to deal with The Alex Danvers Glare™. After blubbering a lot of gibberish, he decides it’s better…not to mention safer…to come clean about Kara.

Meanwhile Sam aka Reign (but we don’t know that yet!) is having a Day of her own. She’s about to start a big new job but before she gets there, she’s called away to her daughter’s school where she learns Ruby punched someone in the face. 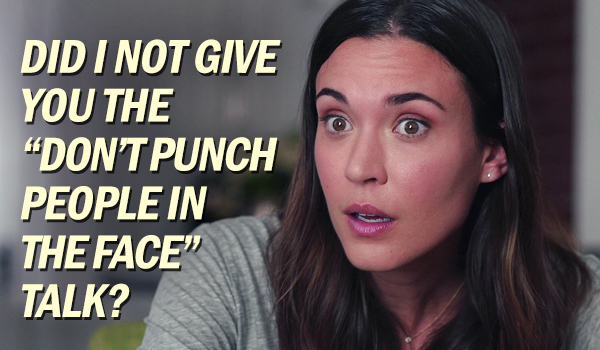 Ruby’s decided her mom’s got superpowers because of what happened on the Waterfront and for some reason she tells her friends at school. They of course call her a liar, and well, she didn’t appreciate that all too much.

She thinks her mom’s lying about not having powers and it’s her job to get her to “out” herself. That way, her mom can spend most of her time with her and not go off to a stupid new job, even if that stupid new job will bring in a lot of money for them.

Back at Kara’s, she’s attempting meditation, Kryptonian style. Alex invites herself inside and tells Kara she knows what’s up thanks to Winn. Kara confides in her sister. She’s trying to get back to being who she was but everything she found respite in is gone. She doesn’t have Mon-El. She’s at odds with Lena, who’s asking where she is all the time. She’s still off kilter, feeling broken as Kara but strong as Supergirl. But now, Psi is taking even that away from her.

It’s an extension of what she said last episode but now I really feel like we’re getting closer to a breakthrough. Mainly because she’s finally listening to Alex, finally, and there’s nothing the Danvers sisters can’t get through together. 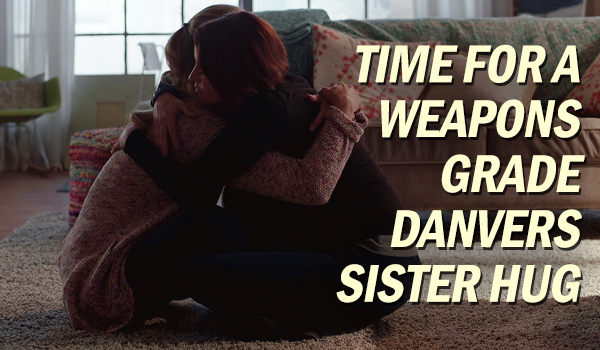 Ruby, in the meantime, has run off and is ignoring texts from her mom. But when she sees Psi going after the police and an armored truck, she uses that as bait to get her super mom to save her.

Supergirl makes a stop at the DEO before heading off to the site of Psi’s latest attack, and that’s a good thing. Winn’s ready for her with a psionic inhibitor, which should stop Psi in her tracks. Or so the theory goes.

Ruby puts herself in the path of a wrecking ball hoping her mom will stop it. Sam rushes over and holds onto her daughter just in time for Supergirl to catch the wrecking ball, saving them both. 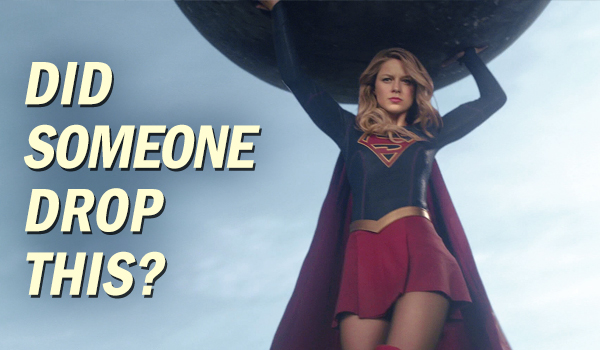 Supergirl goes against Psi but falls prey to her attack once more. Thankfully Alex is there, and Kara shares her deepest fear: The pod she’s been envisioning was Mon-El dying, not her leaving Krypton. Alex has to pull her back from the edge and assures her her fears are not real. That she saved Mon-El, just as her mother saved her by putting her in the pod and getting her off Krypton.

And with that assurance, Kara’s able to take a stand. This time it holds because she knows her crippling fear was based on a lie. Psi’s perplexed by her strength. Well, she’s perplexed up until Supergirl headbutts her into unconsciousness.

Later that night and back at CatCo, Lena’s working late and Kara has some crow to eat. She apologizes for being a bad friend and a crappy employee and points out Lena’s a good friend and great boss. They kiss and make up (proverbially, of course) just in time for Sam to show up. Lena introduces her, Samantha Arias, to Kara. Sam will be taking over Lena’s old job at L-Corp.

And while everyone else settles in for the night, Sam testing to see if she’s super strong (she’s not), Kara and Alex having a sister movie night (yay!), J’onn’s off by himself drinking at the alien bar when he receives an urgent psychic message from M’gann. He needs to return to Mars, NOW. 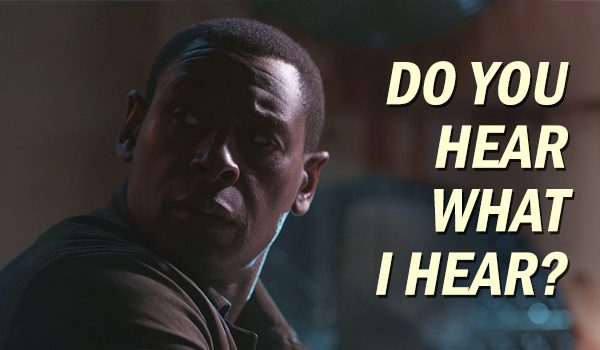 Triggers showed that Kara is finally dealing with losing Mon-El. This is a good thing. While there was a three month jump from the end of S2 to the beginning of S3, Kara was essentially in a state of emotional limbo. She didn’t come to terms with losing someone she loved, she simply ignored it and pretended it didn’t happen. Now she’s allowing herself to go through the process of grieving and accepting. By stripping away the safety net of her powers and forcing her to face her anxiety head on, Psi actually unintentionally did her a favor. Now, she’s allowing herself to feel broken and awkward, rather than avoiding it. Now she’s tackling her fears and she’s accepting help from her friends and, especially, her sister.

Meanwhile, as much as I adore Sanvers, we saw some cracks appear in this episode. Namely around the topic of having kids. The DJ versus live band argument was, I felt, emblematic of the fact they’re not on the same page overall on that important issue.

I give Triggers 9 Alex Danvers Glares™ out of a possible 10.

If it's scifi, fantasy or superhero related, I'm probably watching it. Proud to be reviewing Killjoys, The 100 and Supergirl for The Nerd Element!
@theuberfan
Previous Supergirl Season 2 Refresher Guide/Year In Review: New Beginnings
Next The Gifted S01E01-03 Review: In Their Shoes