BBC America has announced that the show Doctor Who will make an appearance in Hall H for Comic Con International: San Diego (SDCC)! In years past the panel usually takes place on Sunday, the last day of the convention. However, specific days and time of panels, and signings will be revealed in the weeks to come as we get closer to the con. Comedian Chris Hardwick (Talking Dead, Talking with Chris Hardwick), a major fan of the show and a staple of SDCC, will be moderating the panel*.

Scheduled to appear is the latest regenerated Doctor herself, Jodie Witaker, along with co-stars, Tosin Cole and Mandip Hill, who will be playing characters Ryan and Yasmin respectively.  New showrunner Chris Chibnall (Broadchurch) and executive producer Matt Strevens (An Adventure In Space And Time) rounds out the rest of the people teasing fans of the new season, which premieres in the fall. 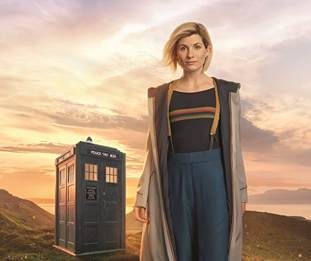 As first timers of the con, I am sure that fans that manage to get into Hall H will give the newest cast much love. Are you excited about the new season? How cool is it that we finally have a female doctor? Sound off below in the comments!