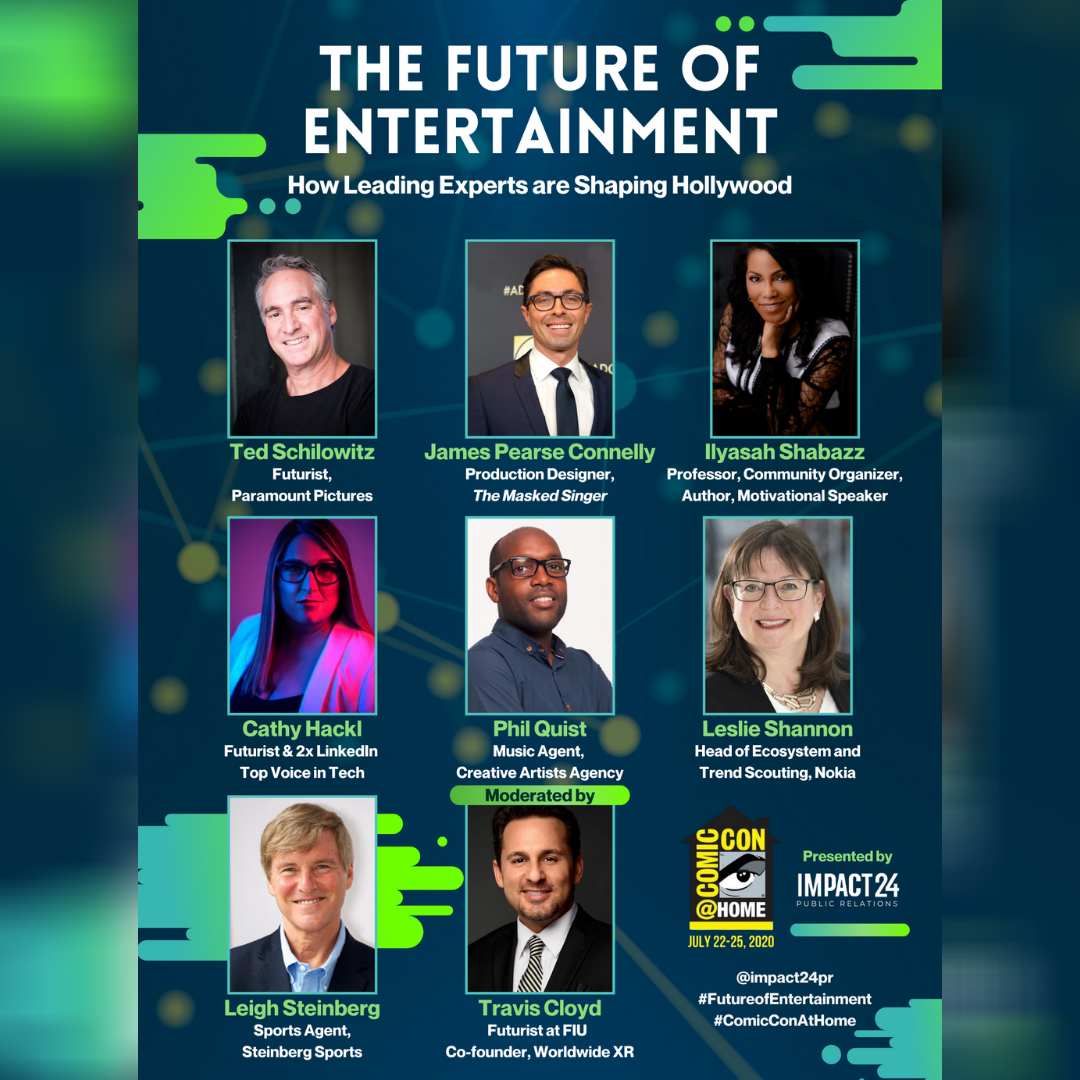 The nature of the current coronavirus pandemic has not just changed the way the world goes about daily life, but also how the media we consume gets made. How do you make a live television show, for example, if no one can gather together to work on it or have an audience in studio to boost the energy of the set?

For production designer/art director/set decorator James Pearse Connelly, pivoting to the virtual world to create content for the real world is less a conundrum than an exciting venture.

As he said during “The Future of Entertainment” panel at Comic-Con At Home 2020, which focused on emerging technologies and how they will shape everything from Hollywood to education, “It’s been a blessing, in a way, in a renaissance to reevaluate some things we’re doing, dust off some bad habits, and embrace screenless screens.” (The panel can be viewed at https://youtu.be/lVPyZPd9Lek).

Connelly has a long resume working in television, with film credits sprinkled in. His current television projects include mega-hit “The Masked Singer,” “Celebrity Show-Off,” “Ultimate Tag,” “Chrissy’s Court,” and “Access Hollywood”—and that’s just scratching the surface of his credits. He has also worked on “Holey Moley,” “The Voice,” “Project Runway,” and “The Jim Jefferies Show.” “Team America: World Police” (2004) and “The Kids Are All Right” (2010) are two of his film credits.

Additionally, he’s been nominated 19 times for Emmys and won twice, a Primetime Emmy in 2009 for Outstanding Art Direction for Variety, Music or Nonfiction Program for the 2008 MTV Video Music Awards (shared with three colleagues), and a Daytime Emmy in 2020 for Outstanding Art Direction/Set Decoration/Scenic Design for “The Kelly Clarkson Show” (shared with four colleagues).

Prior to the panel going live, Connelly participated in a virtual roundtable discussion at which he appeared to be very comfortable with the format, given how his work has evolved.

As with the Con panel, the focus of the conversation was mainly about navigating production in the age of COVID-19. Several questions posed to Connelly were about his work in the virtual sphere, and how show creatives can get back to work in the real world.

“I own a design studio and I design variety shows for a living. I probably do between 25 to 30 a year,” Connelly said. “When the pandemic hit, we obviously hit a little bit of a slowdown.”

But, as Connelly noted, “everyone needs good design right now. Everyone needs solutions. You don’t have audiences anymore. And for thousands of years on a stage production, you’ve leaned into what an audience would transfer, an energy to the performance.”

Connelly’s solution has been to explore the technology available for production work. For variety competition shows, that includes redesigning where the judges sit, how far they are spaced apart, and what to do with a potential audience. Apart from those issues, there’s another, more pressing edict.

“What we’re getting [from show producers] is we cannot reveal that we’re in a pandemic,” Connelly began. “We don’t want to see Plexi[-glass] barriers; this is not a negative approach. This is an upgrade to the world. This is a chance to redesign negative spaces that we need for physical distancing in a way where we can fill it with design and artful elements and things to enhance the story.”

“It’s been an exciting time for a designer—everybody needs solutions.”

Before the pandemic, working on “The Masked Singer,” for example, was already a big production. The Nerd Element asked what the most challenging aspect of the show was for him.

“I would say that the most challenging was the actual production itself in season one,” he began. “If you just imagine sort of my journey with the show was, I heard about the show, I was very excited [to] make a big Fox stage show that involves music.”

“The Masked Singer,” a huge hit in South Korea that spawned other iterations across Asia, presented a test for Connelly: how to transfer “a show where celebrities are going to dress up in big, outrageous costumes, and you’re gonna guess who they are” for American audiences.

Connelly noted the popularity of superheroes such as Batman and Spider-man, and decided to approach the celebrity contestants as superheroes. “What did their world look like?” Connelly said, continuing that for the backstage area, he “studied Batman in the Batcave and Batman’s lair and where he hung up all those costumes, and backstage was a very transferable point for design for me.”

The stage, however, “was birthed out of Burning Man and Coachella and opera.”

“Ultimately, that has been the biggest challenge as I look back on the show,” he said. “From here on out, it’s just been fun, designing clues and performances. I don’t know who the celebrities are. They keep all the secrecy down to a handful of people. [So I] try to guess, as well as embrace those characters and make background stories.”

Later in the conversation, Connelly, in discussing the outside-the-box thinking precipitated by the coronavirus for shows such as “The Masked Singer,” said, “Maybe in the new year in the spring, you’ll see really incredible art.

“What we’re doing with AR [augmented reality] and virtual is unbelievable. Watch the award shows and the big variety shows because they’re the ones who are sort of the test pilots in production right now.”

“You have an entire industry, a huge global industry, all entertainment, not working, trying to figure out how to tell stories,” Connelly said about the current need to get fresh content onscreen as movies continue to be on hold due to theater closures and at-home audiences binge-watch everything available. “The demand for stories is huge. And everybody’s looking to design writers and directors to figure out new ways to do that.”

Connelly has spoken to “VFX houses and animators, for instance, because they can tell stories without a lot of people on site [and] create a production. They can create them in the computer […] without a lot of COVID safety risks.”

“I think that in the future, we’ll never go back to the way it was done. I think we’re finding new efficiencies,” Connelly predicted, though he acknowledged that once the coronavirus emergency passes and people slowly return to normal, things will go back to the old ways of producing content. However, he feels the newer technologies and efficiencies will take hold and transform the industry.

“As we stay with this and learn about storytelling with minimal people and minimal footprint, it’s a chance to look at other industries that do it well,” Connelly stated. Creators across industries are “looking at the video game industry,” he noted. “They’re looking at feature films and single camera narratives. They’re looking at smaller footprints, live events, parking lots outside where those events [are held], and they’re trying to pull solutions from any direction and mix it.”

As someone who works well before a show is even filmed, Connelly says demand has shifted to pre-production to really set things in motion. “You’ve got to ask the effects industry to work with the people who create the initial story environments in the beginning, like the production designers like myself,” he said. He also stated that groups who operated more or less independent of each other are now “forced to play together, which is completely upending their process.”

“I mean, it makes people nervous,” he acknowledged, saying that if one is going to “spend $10 million on something, you want to check off your boxes and cross all your T’s first.”

Variety shows are “the guinea pigs of this production right now,” he said. For example, earlier this year, the Daytime Emmys were presented virtually, and now some soap operas have been filming socially distanced scenes. Working in this new paradigm has forced Connelly out of his comfort zone, he said.

As an example, Connelly noted that he’s been using Epic Games Unreal Engine software for years because it allows him to eliminate the time it takes to render a scene. Results are immediate versus taking 20 minutes with traditional rendering software.

“I have never told that to anybody. It’s been a secret,” he announced, adding, “I am now screen-sharing with every director to show my rendering to get him to see what I’m seeing immediately so that we can get decisions fast.”

The delays of emailing and/or meeting in person are gone. But, he said, “it’s also been revealing something about my workflow [and] it’s also opened me up to new technology.

“This is the best time to get involved in this industry,” Connelly advised to those who are thinking of production design as a career. “My advice is to not follow any sort of conventional process that was handed down through the history,” he continued. “I think you’re gonna see a lot of change.”

For his part, Connelly is looking to add to his software arsenal. “I work mostly in multi-camera television, and that adds another level of difficulty to making Unreal work on a wraparound background screen and LCD screen,” he said. “There is no college class or MFA program in this. So I’ve been doing most of my education when I can by engaging with people in in groups like on Facebook or Reddit, looking at a general YouTube just to refresh my memory, and just talking to some people who use the program in different ways.”

About his work in the variety sphere, Connelly goes by a saying his father, an architect, is fond of: “Environment plus personality equals a behavior.” Connelly believes if he can mix his “environment with whatever actor or talent or contestant is in the space, we’re going to get the story out of it.”

As he noted in the “Future of Entertainment” panel, Connelly and his colleagues “are looking for a way to replace the positive energy [from audiences]. We’re thinking of skyping people in and adding in laugh tracks for sitcoms.” As he told the roundtable, he’s also getting “calls from all sorts of industries to build virtual sets for them.” The work may be paused in some areas, but for production designers and pre-production creatives, the work has shifted in a new and promising way.

While Connelly is aware of the difficulties of life during a pandemic (his own wedding has been postponed more than once because of it, he shared), when it comes to his work, he is more enthusiastic about the possibilities to expand the way he realizes his creative visions.

Brandon Alinger with Prop Store talks with us at SDCC 2016