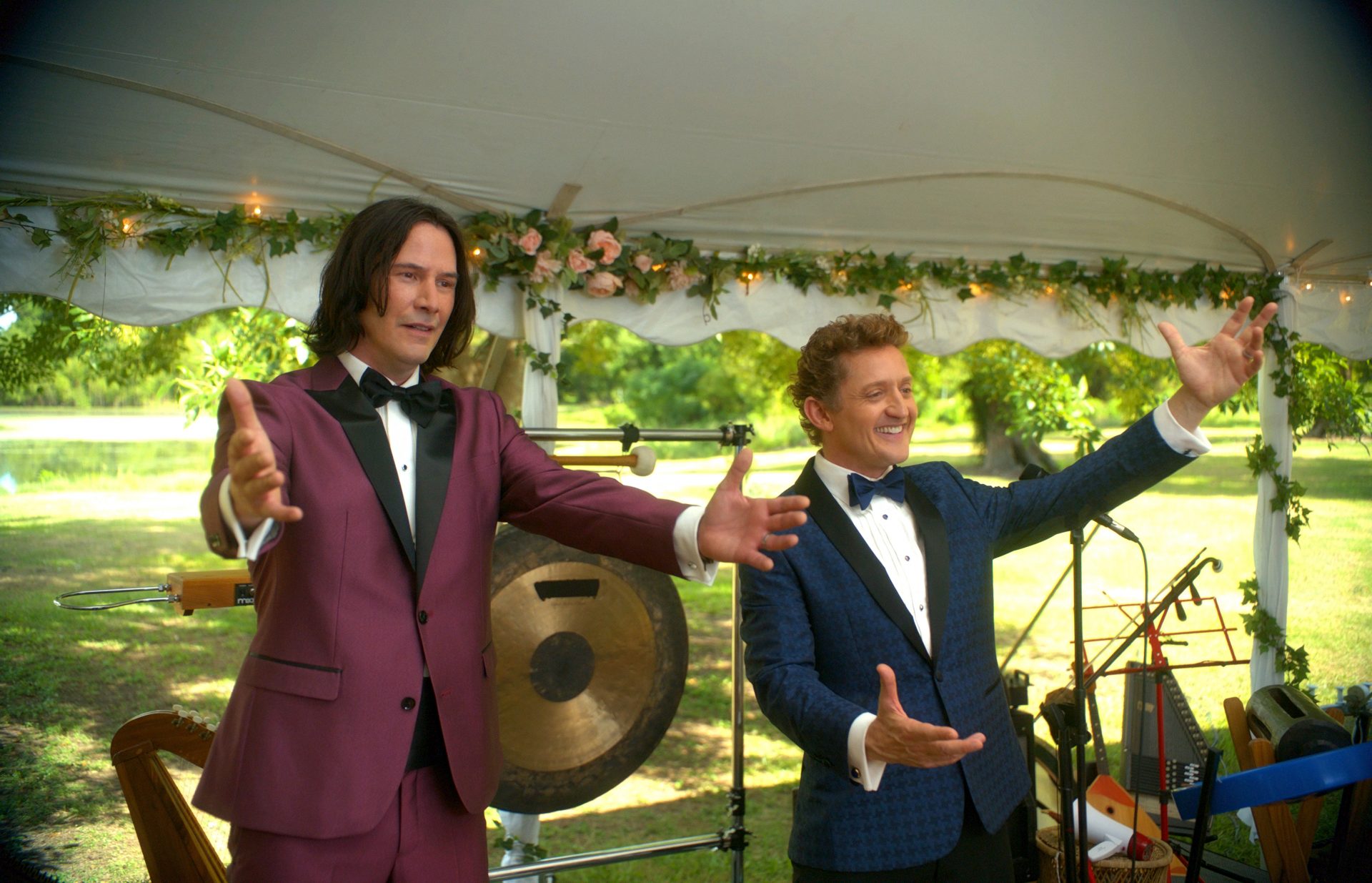 First introduced 31 years ago in Bill & Ted’s Excellent Adventure, the two goofy, sweet characters have become a pop-culture phenomenon, gracing everything from action figures to comics to animated shows. A sequel, Bill & Ted’s Bogus Journey, came out in 1991, and since then, fans have clamored for another film.

That film is finally here in the form of Bill & Ted Face The Music. Set 25 years since the boys won the Battle of the Bands at the end of Bogus Journey, the new film finds the boys now family men, having married their princesses, Joanna (Jayma Mays) and Elizabeth (Erinn Hayes), respectively, and both having daughters. Ted and Elizabeth named their daughter Billie (Brigette Lundy-Paine), and Bill and Joanna named theirs Thea (Samara Weaving), natch.

In the debut feature, Bill and Ted wound up using time travel to complete a school report, and in the second, they wound up meeting Death (William Sadler, reprising his role here) and having to win a Battle of the Bands. Slightly higher stakes, but not insurmountable.

In Face The Music, Bill and Ted not only have to save the world, but the fabric of reality itself. Whoa.

The film wastes no time setting up the premise. Narrated by their daughters, the story opens with them informing us that not only did Wyld Stallyns (Bill and Ted’s band) crash and burn not long after their single, “Those Who Rock,” topped the charters for a hot minute, but that they still have not written the song prophesied by their friend from the future, Rufus (the late George Carlin), that would unite the universe for all time. It’s bogus for sure.

Not long after a very funny wedding sequence, the boys are visited by another time-traveler from the future, Kelly (an exceedingly funny Kristen Schaal), who takes them to see her mother, The Great Leader (a feisty Holland Taylor), because time has started collapsing on itself. The Great Leader tells the two that if they don’t create and perform the prophesied song in 77 minutes and 25 seconds at a specific location, the world and all reality will end. No pressure, dudes.

What follows is a joyful romp through time as Bill and Ted attempt to find the right “us-es” in their future where the song has already been completed. Each time jump gives Winter and Reeves an opportunity to show us what Bill and Ted would be like without their perpetual optimism. It’s not pretty, but it’s frequently hilarious.

Of course, their daughters, having their fathers whisked away to the future, decide they need to help, which results in their own time-traveling adventures as they try to assemble the ultimate band to back their dads and create that special Earth- and reality-saving song. Throw in a very funny turn by Anthony Carrigan of “Barry” fame as the morally-conflicted-killer-robot-with-an-identity-crisis, Robot (who has a name and insists on telling you it’s Dennis Caleb McCoy), plus a few other surprises and cameos, and you have all you need for a good time.

Face The Music moves fast, not lingering too long on any one thing to get bogged down or to stretch a joke too far. Credit goes to the tight script by the franchise’s creators, Chris Matheson and Ed Solomon, and to the expert direction of Dean Parisot, who also directed the science fiction/comedy classic, Galaxy Quest (1999). The film boasts good practical effects (especially the aging makeup on Winter and Reeves) and some CGI effects that have a little bit of throwback cheesiness mixed in (or it might just look that way on my TV).

But what really sells everything is the basic decency of the main characters and their wholesomeness, which they’ve passed on to their daughters (along with a love of a bodacious tune). Both Weaving and Lundy-Paine do a good job of bringing their own personalities to Thea and Billie, while Mays and Hayes step in ably as Joanna and Elizabeth. Amy Stoch returns as babysitter Missy, and Hal Landon Jr. returns as Ted’s father, the now-promoted Chief Logan. There’s also a very funny turn from Jillian Bell as Dr. Wood, a couples counselor who is quite befuddled and not a little bit frustrated by Bill & Elizabeth & Ted & Joanna. Sadler remains perfect as Death, who’s become just a wee bit petulant since his acrimonious break from Wyld Stallyns.

As anchored by the timeless energy of Winter and Reeves, the movie is simply fun as heck and perfect for this moment in our reality. Both keep Bill and Ted’s fundamental goodness intact while branching out a bit as their future us-es to show what could happen if that goodness gets a bit beat down. Their spot-on performances remind the audience us-es that there’s still joy in the world, that there’s still hope, and that love and determination (and perhaps a lot of humor and music) can save us all.

Pro tip: Make sure to stick through the entire credits for a very funny after-credits sequence.

Bill & Ted Face The Music will be released in theaters and on demand on August 28, 2020