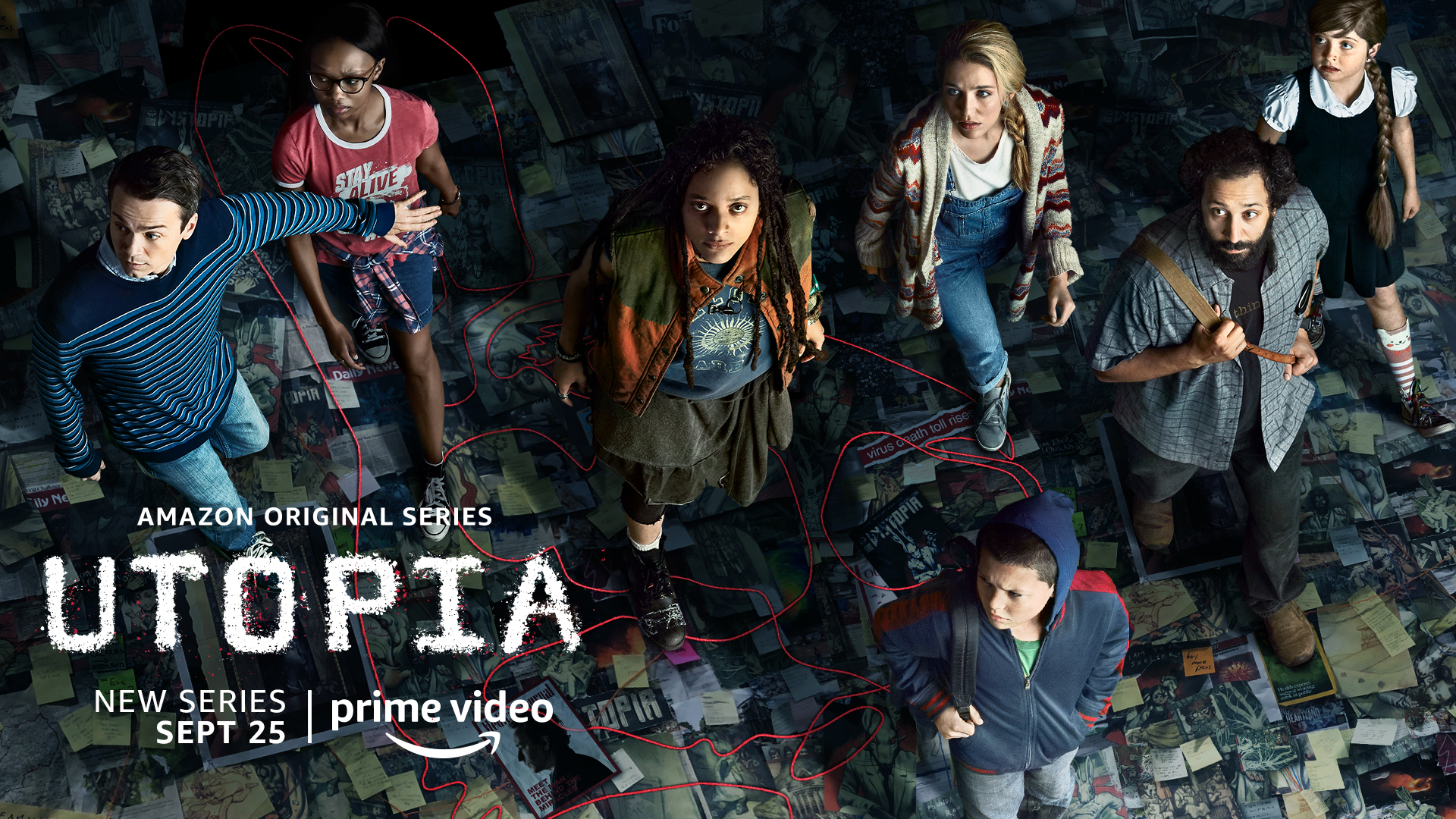 The following review is based on viewing the first seven episodes; the spoiler level is minimal.

After several years in development limbo, the American remake of the cult British series, “Utopia,” is finally making its debut on Amazon Prime Video.

The British original was created by Dennis Kelly and had two series of six episodes each from 2013-14. It featured a group of comic-book nerds who discover that the graphic novel they love and believe foretells real-world disease outbreaks, The Utopia Experiments, has a sequel. They want to get their hands on it and see what new disasters await. A shadowy group called The Network, led by the malevolent Mr. Rabbit, are intent on making sure the sequel never sees the light of day. A woman named Jessica Hyde (played by Fiona O’Shaughnessy), who is connected to the events in the graphic novel, appears and forces them to help her find the pages of the sequel. From there, it’s a race to stop Mr. Rabbit and The Network’s horrifying plans for humanity.

The remake is helmed by acclaimed writer Gillian Flynn (Gone Girl, Sharp Objects, Widows). As she discussed in the San Diego Comic-Con At Home panel for the show this past July, she put her own spin on the story, molding the series after 1970s conspiracy thrillers, a different flavor of paranoia from the original. Unfortunately, what was both a colorful and darkly funny show is now a drabber affair with jarring tonal shifts.

The new “Utopia” starts off promisingly. A woman and her fiancé arrive at house she inherited from her grandfather. In the mess within, the fiancé discovers the pages to what appears to be a graphic novel called Utopia. After looking it up online and discovering it is the long-awaited sequel to a cult classic called Dystopia, the couple decide to sell it to the highest bidder at the upcoming Fringecon, a comics convention in Chicago.

The news catches the eye of the idealistic Sam (a newly created character for the American version played by a plucky Jessica Rothe), who fully believes Dystopia predicted several major disease outbreaks as well as outlined a conspiracy behind them. She immediately alerts her online Dystopia friends group: Ian (Dan Byrd), who enjoys the comic but is not so sure about the conspiracies; Becky (Ashleigh LaThrop), who, like her counterpart in the original, has Deel’s, a disease predicted in the original comic; Grant (Javon “Wanna” Walton), who brags constantly about his Porsche and playboy lifestyle; and Wilson Wilson (Desmin Borges), a paranoid prepper who is as all-in on the Dystopia conspiracy as Sam is.

The group decides to meet in person for the first time at Fringecon and comes up with a plan to outbid all others interested in Utopia. This time, the comic also features Jessica Hyde (here played by Sasha Lane), portrayed as a pig-tailed youngster. According to the comic, Jessica’s father invented all the diseases and is missing. Comic-book Jessica is on the run from Mr. Rabbit and The Harvest (which replaces The Network), his group of true believers.

Also at the Con are Harvest fellows Arby (Christopher Denham) and Rod (Michael B. Woods), a pair of extremely nasty killers. Arby is the quietly menacing one, and Rod the more flamboyant torturer.

New characters to the world include Dr. Kevin Christie (John Cusack), a multimillionaire philanthropist/scientist who asks his family every night, “What have you done to earn your place in this crowded world?” and thinks he knows what’s best for humanity, and Dr. Michael Stearns (Rainn Wilson), who discovered the Russian flu that factors largely into the plot and whose career has stalled out since a mental breakdown years earlier. Where they fit into the conspiracy is slowly revealed throughout the series in converging plot threads.

Once Jessica reveals herself to the core nerd group and basically takes them hostage in her quest to recover Utopia and find her father, the mayhem ramps up and the conspiracy deepens. The group finally manages to get all together, which includes discovering that Grant is not a rich playboy with a mansion but an actual boy from a broken home. Along his path to joining up with his online friends, he meets Alice (Farrah Mackenzie), a foster child with whom he forms a quick bond.

During the “Utopia” panel, Flynn said she felt the story is more “resonant” now, and while she’s not necessarily wrong, it may not resonate for many the way she hopes it will. How do you sell a conspiracy thriller about a fictional flu outbreak that is killing children across the U.S to an audience in the midst of a real, serious pandemic, not to mention one that has spawned several outrageous conspiracy theories of its own?

Truthfully, it could have been the series for the times if it wasn’t so uneven. The original worked because it was dark, compact, and mordantly funny. The American version is expanded out to eight episodes (originally, nine were planned), and much of the black comedy doesn’t jibe well with the proceedings. What was seamlessly funny in the bleak original here stands out as comic relief that doesn’t lighten the mood because the tone shifts too extremely. There’s a lot of comedy to be mined from Wilson’s heightened paranoia, for example, but it frequently goes over the top into humorless, screeching parody.

The show is also incredibly violent. While the original British series was criticized for its level of violence, the Americanized version goes even farther with the blood and guts. It’s not nearly as graphic as fellow Amazon show “The Boys,” of course, but it’s still fairly gory. Normally for me, this is a feature, but here, it’s a bug.

Another problem, unfortunately, is Jessica herself. While Lane does her best with what she’s given, Jessica as a character is rather unpleasant and unsympathetic. Even if her hyper-competence is parodic, it’s just not funny and it’s not any fun to watch. By the time the show gets around to trying to soften her character, it’s too late.

On the plus side, Ian and Becky are an endearing pair, Sam is delightfully earnest—a scene where she lays out the Dystopia conspiracy to a group of clueless male cosplayers is a highlight—and Wilson is generally fun and engaging. Byrd, LaThrop, Rothe, and Borges do their best with the material as well, and for the most part, their characters work. Credit also to Walton and Mackenzie for their portrayals of children caught up in something beyond them. They both manage to engender sympathy while making believabe potentially dangerous moppets. Walton especially is charismatic as the lonely Grant.

Denham is suitably creepy as the ruthless, raisin-popping Arby, and Cusack and Wilson are also good in their new-to-the-series roles (although if you’ve seen the original, you’ll figure out Stearns’ analog quickly—jury’s out on Christie’s until I see the season finale). Sonja Sohn pops up as Agent Milner, who may or may not be an ally ready to help the gang uncover the conspiracy and solve Utopia’s mysteries.

The biggest problem by far, sadly, is that every development is telegraphed and predictable. It’s bad enough that I saw every “twist” in the seven episodes I viewed coming*, but I also was reciting lines of dialogue before characters said them. Sometimes, there is a joy in that sort of familiarity, but when you couple it with an unpleasant main character, nonsensical deaths, and jarring tonal shifts, it becomes tedious. It’s a surprising misfire from the usual tight craft from Flynn.

Regardless, if you like stories about comic-book nerds saving the world from a big conspiracy, there’s a chance you will probably enjoy “Utopia,” which serves up common tropes on a platter and includes some fun Easter eggs in the background (keep an eye out for “Gone Girl The Musical”), plus a cast with several rootable interests. I would be lying if I said I wasn’t going to be watching the season finale to find out what happens, even if it’s just to satisfy my own curiosity about the predictions I have for it.

If you’ve seen the original, though, you’ll probably want to give this a pass. In trying to be its own thing, this version of “Utopia” winds up missing the mark of what made the original such a creepy good time.

(*Reviewer’s note: I watched the American version before seeking out the original,, which is notoriously difficult to find unless you live across the Pond, so I had no idea of what was coming up, nor do I know if the American version will follow the British version’s ending. I hope I’m wrong about what I predicted for it because it would be nice to be pleasantly surprised.)