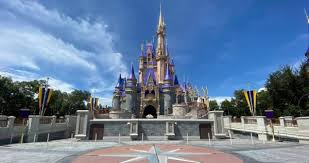 Hi everyone! I have some big layoff updates for Walt Disney World. It appears that They are going to layoff 8,800 Part-Time Union Workers which represents 43,000 employees at the resort. The union announced the layoffs Wednesday after several days of negotiations with Disney.

“These are unprecedented times,” the announcement from the union read. “It is unfortunate anytime a worker is laid off and the mass layoffs that Disney is facing is extremely difficult for 1,000’s of cast members.”

However, as part of the agreement, 5,299 full-time workers who were set to be laid off will get to keep their jobs.

“As incredibly difficult as it is to take this action, this agreement helps us preserve many full-time jobs,” a Disney spokesperson said in a statement. “For those affected by this decision, we thank your for all your dedication. While we don’t know when the pandemic will be behind us, we are confident in our resilience, and we hope to welcome back Cast Members where we can.”

Full-time workers who have not yet been called back will be able to keep their health insurance while on furlough.

The union said it also reached an agreement with Disney for laid-off employees to have the ability to return without losing their status.

“Any Cast Members who are laid off in the future will retain their employment, their seniority, rate of pay including any scheduled increases, and the right to return back to a previous job with the Company until October 1, 2022,” the union’s release said.

Last week, The Walt Disney Company announced it would lay off 28,000 U.S. workers across its Parks, Experiences and Products segment, with 67 percent of the layoffs being part-time jobs.

The planned layoffs also included nearly 6,700 nonunion workers at Disney World. In a notice filed with the state, Disney said the layoffs would go into effect December 4.

Disney World reopened its theme parks in mid-July. Since then, more than 21,000 full-time and 3,877 part-time workers union employees have been called back to work, according to the union. However, thousands of others remain on furlough. Wow! This is crazy to hear about these layoffs, but it is not as big as 28,000 employees. So, all together, it appears that Walt Disney World has laid off 36,800 Employees! I added the last week’s layoffs which was 28,000 and 8,800 this week which is 36,800.

I got this information from the News 13 Orlando.

What are your thoughts on this Disney World layoffs? I would like to hear some comments, opinions, or thoughts down below. Stay tuned for more Disney lay-off updates.