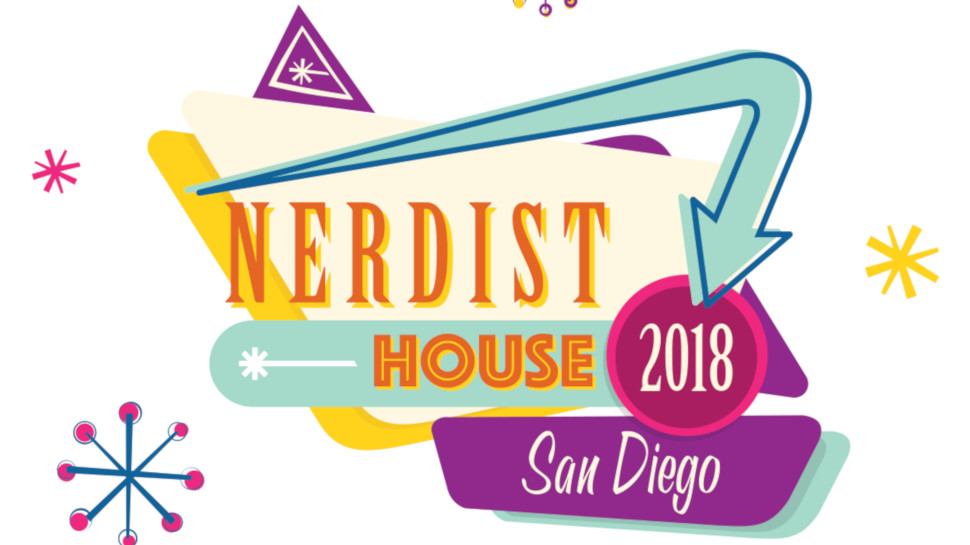 Hello San Diego Comic-Con attendees! Now for some information, I know you are all interested in, Parties!! The Nerdist is handing us 4 different parties over the course of Comic-Con week. We have the break down in the official press release for you below along with how you can attend. I have definitely registered for the Kraken Rum party and hopefully, I can get into some others. What about you? Are you attending? Let us know in the comments!

Nerdist will toast the start of SDCC 2018 on Thursday, July 19th with the Alpha Book Club Happy Hour where avid readers and book club fans can chat and hang with hosts Maude Garrett, Hector Navarro, and Rachel Heine. Later in the evening party partner The Kraken® Black Spiced Rum joins forces with Nerdist to kick off San Diego Comic-Con with a special, members-only party for Alpha, the premium streaming entertainment service from Legendary Digital Networks. In addition to meeting the talent from their favorite Alpha shows, members will receive specialty crafted Kraken Rum cocktails, created for Comic-Con.

The Alpha After Dark Party with The Kraken Rum will also feature famed graphic artists Tom Hodges and Tony Parker, who will offer attendees the opportunity to receive personalized Kraken-inspired portraits. Guests will enjoy a variety of specialty cocktails created specifically for the event, including the Ahoy! Alpha, the San Diego Storm, and Kraken Kon-Tiki. The Kraken¹s exclusive membership program, The League of Darkness, will be available onsite for fans to show their commitment to the heinous sea beast.

On Friday, July 20th, Robo Rhythm, hosted by Legendary Television, in partnership with Nerdist, will offer invite-only guests an evening that¹s out of this world at Nerdist¹s annual Comic-Con Industry Party.

Nerdist will close Comic-Con with the Bizarre States 200th Episode Party hosted by Jessica Chobot and Andrew Bowser on Saturday night, July 21st. Celebrate the mysterious and spooky with music curated by IHEARTCOMIX and Nerdist House DJ Franki Chan, food, beverages, and more surprises thematically inspired by the paranormal show. With three nights of non-stop fun, fans will have their pick of parties with the Nerdist Team at SDCC!

The complete schedule of Nerdist parties at SDCC 2018 is:

Description: Alpha & The Kraken Rum return to San Diego Comic Con for their exclusive Alpha After Dark Party. Alpha members will enjoy a curated evening of music by DJ Franki Chan of IHEARTCOMIX, the opportunity to receive personalized Kraken-inspired portraits by famed graphic artists Tom Hodges and Tony Parker, and custom signature Kraken Rum cocktails! Invites are limited to Alpha members; non-members can sign up for Alpha at www.projectalpha.com. Fans will want to attend the party to see what The Kraken unleashes at SDCC this year!

Description: Party with Jessica Chobot and Andrew Bowser! Celebrate the 200th episode of Bizarre States with music from our Nerdist House DJ, food, beverages, and more surprises thematically inspired by the show. Bizarre States 200th Episode Party will be open to Alpha members and invite-only industry and talent.

Alphamembers will receive exclusive Fast Pass and Priority Access wristbands for Alpha Book Club Happy Hour, Alpha After Dark Party with The Kraken Rum, and Bizarre States 200th Episode Party.Not a member yet? Sign up at www.projectalpha.com and join the fun.

Nerdist is a multi-platform media and entertainment network for fans of genre and pop culture content. With flagship content including Nerdist News hosted by Jessica Chobot, weekly shows Because Science and The Dan Cave, and daily in-depth editorial coverage, Nerdist reaches millions of people every day on Nerdist.comand on leading platforms including the premium streaming service Alpha, YouTube, Facebook, and the Nerdist Podcast Network.  Nerdist is owned by Legendary Entertainment and is part of Legendary Digital Networks, which also includes Geek & Sundry and Amy Poehler¹s Smart Girls.

Alpha is a leading premium streaming entertainment service from Legendary Digital Networks that offers access to fully interactive live and on-demand channels, exclusive shows, and a suite of innovative features that empower fans to experience the programming they love in a unique and personally customizable way. Since its launch in 2016, Alpha has given members unprecedented access to engage directly with on-air personalities and form immersive communities around their passions. Alpha¹s slate of original and exclusive shows includes Talkin¹ Toons, Sagas of Sundry, Painters Guild, Because Science, Bizarre States Los Angeles, and Critical Role. Try the Alpha experience commitment-free for 30 days atwww.projectalpha.com.