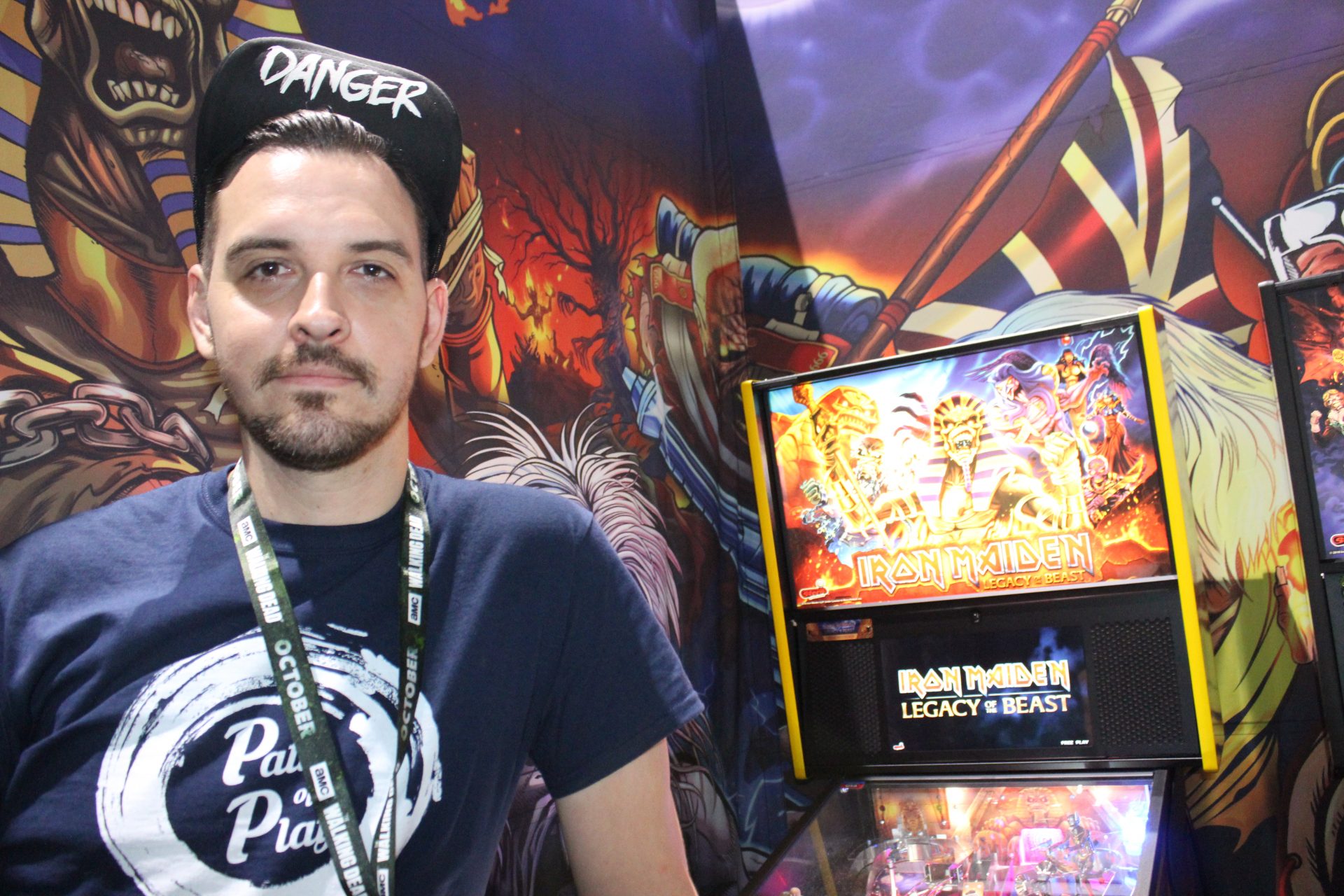 Since 1999, Stern Pinball, Inc. has been bringing branded pinball machines to the masses, including popular titles “The Simpsons Pinball Party” (2003), “AC/DC” (2012), and “Star Wars” (2017), which was featured at San Diego Comic-Con 2017 both on the exhibition floor and in a pinball lounge at the San Diego Marriott Marquis Hotel next to the San Diego Convention Center.

Stern Pinball returned to Comic-Con this past July to showcase its latest creation, Iron Maiden: Legacy of the Beast. The machine features the band’s mascot, Eddie, in his various guises, plus twelve songs from Iron Maiden blasting through its speakers. The machine has an MSRP of $5,999. A companion comic book is available for the devilish price of $6.66.

To showcase the Legacy of the Beast, Stern had its “Global Ambassador,” Jack Danger, on the floor and in the pinball lounge at the Marriott Marquis playing the machines. Danger, host of the Twitch TV streaming pinball show, “Dead Flip,” started as an animator, moving into pinball first in animation and design concepts, then as a player who now competes in several tournaments a year.

Legacy of the Beast was designed by Keith Elwin, one of the top pinball players in the world, based on a pinball machine he had created on his own as the type of machine he wanted to play, according to Danger.

“Stern has a lot of the great old pinball designers that have been in the industry for a very long time,” Danger said. “The concept for this game, the layout before Iron Maiden as a theme came, he built homebrew in his house.”

In a conversation punctuated with lots of laughter, The Nerd Element spoke with Danger at this year’s Comic-Con about his job as Stern’s global ambassador, his pinball life and love of Stern machines, and where one might find a Stern Pinball machine to play:

TNE: Where do you teach them?

JD: I bounce around to different bars, people’s basements; wherever there’s a pinball machine, I’m probably there doing my job.

TNE: I have a question about the machines. Are they tilt proof?

JD: No machine is tilt proof, even if you take the tilt out.

You can hit a game enough because nudging a game is like 50% of playing pinball, but if you’re really just there to beat the crap out of it, it’s going to yell at you. You lost your money in that fight for sure.

TNE: So you said you were—you’re the pinball wizard, right?

JD: Sure. I feel more like a warlock if you will. But I will go with wizard.

TNE: Do you play in tournaments?

JD: Yes. I compete professionally. After Comic-Con, I’m flying immediately to [a tournament] in Pittsburgh where I am absolutely going to win the whole thing. Regardless of what anyone else says, I’m taking that dang trophy home, I’m filling it up with soda, and I’m going to drink out of it while everyone just cries.

TNE: How many hours a day do you practice on Stern pinball machines?

JD: I play pinball at the very least three to five hours a day, every single day. Like any other hobby, practice makes perfect. And you will see yourself getting better if you spend some time practicing your flipper mechanics or maneuvers. Also watch people that are better than you [who] will show you a lot of stuff that you’re doing wrong. That’s how I learned, was watching people that are way better than me: “Oh, so I’m flipping like this, but I need to be doing this thing over here.”

TNE: So did Stern see you playing and say, “I want that guy to be my Global Ambassador?”

JD: (laughing) I started a live Twitch show three-and-a-half years ago where I would set up a bunch of cameras over various pinball machines [and] stream that out to the world to show people how to play better. After a year or two of doing this, Stern caught wind of what I was doing, invited me out to the Chicago Pinball Expo, and it just sort of all fell into place there. It was on the “Walking Dead” pinball machine they had at the time, which was just a crusher—it’s such a good pinball machine—and that’s where we nurtured that relationship.

TNE: What about Stern pinball machines do you like?

JD: They are extremely reliable. The themes are always fantastic. The designers are all the designers you’ve loved throughout the years, and some new ones that are just now starting up who are making the shots on games that you love to make. You got the programmers that have been working on games for years, making the rules that you love, the light shows, everything about it. Stern has cultivated all the great minds of pinball that have been over the years and some of the new ones all into one space to start hammering out the best machines that you can find on the streets.

TNE: What’s your favorite machine to play on?

JD:  I don’t know that I have an answer for that. It’s  mood based; you know, sometimes you want an old slow one. The game I love teaching people to play pinball on is “AC/DC.”

TNE: Why is that?

JD: The shots are fanned out. [O]n that machine, every flipper skill that I can think of can be done on that game. If I’m teaching people how to do post passes or backflips, you can do it all on “AC/DC.”

TNE: Anything else you’d like our readers to know about Stern Pinball?

JD: Just get out there and play them. If you’re going out in public to play pinball, odds are you’re finding a certain pinball machine. You’re going to love it. Go find another one. Fall in love with certain designers of pinball machines, seek those out. You can’t go wrong.

TNE: Where can we find Iron Maiden? Where will that be placed?

JD: Literally everywhere. It really depends on the operators in your hometown that want to buy them. You could theoretically just see one sitting by itself in a laundromat. It depends on who buys it.

You can find more information about Stern Pinball and Jack Danger at the following links as well as follow them on Twitter: