Dragon*Con is the biggest Atlanta, GA based convention which is now hosted in five hotels and an additional building for the vendors area. The first Dragon*Con was in 1987 and it has grown every year since then. There is something for everyone at Dragon*Con, as there are more than a few dozen panel tracks for fans and first time attendees to enjoy.

I have been attending Dragon*Con since 2010 and I will have to say it is one of my favorites to go to. This is because there are a lot of tracks that include some of my favorite writers like Jonathan Maberry, James R. Tuck, Jim Butcher and so many more. There is also the Walk of Fame Hall, which holds all the celebrity guests that attend Dragon*Con. What I find cool about Dragon*Con is that all the guests really love talking with their fans.

One of the big things I like about Dragon*Con is the cosplays that are around and there are a lot. It is also really cool to see what people come up with for cross-over or just original costumes. Also all the kilts that are around mostly come from vendor Utilikilts, who sale traditional kilts and even some original kilts. It is because of Dragon*Con that I got all my kilts. Ever since then I always make it over to Utilikilts to say hi to the guys and they remember me! 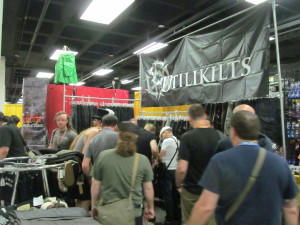 This year was really awesome as the director of Guardians of the Galaxy, James Gunn attended the show along with his brother Sean Gunn, who did the motion capture for Rocket Raccoon and played the Ravager Kraglin in the movie. They had a spot in the Walk of Fame Hall and did two Guardians of the Galaxy panels. (Sorry, I didn’t attend those). I was able to talk to Sean Gunn a lot about the movie and he is really cool and James is so nice!

I mostly attend smaller panels with the Horror track and the Urban Fantasy track because those are my favorites. I love to listen to my favorite authors talk about the books they write, their thought processes, where they get their inspiration and listening to the deep conversations the panel subjects get into. I also go to these because I am friends with a lot of the writers that attend the convention.

If I were to compare it to something like SDCC I would say it is smaller and currently you can still buy your tickets at the door, but you want to buy your ticket early because the prices go up as the convention gets closer. Right now until Sept. 15, 4 day passes are only $75 to attend next year. It is less expensive than SDCC which is $185 for a 4-day badge for 2015. One of things I do like is how they clear the rooms after every panel. Like most dealers rooms at any convention they tend to get crowded. Generally I find a lot of people to be very nice during the convention.

If you are thinking about attending Dragon*Con in the future I would highly recommend it. The only hard part is trying to get a host hotel because they sell out just a fast as SDCC badges. Also like I said before there is something for everyone here in my opinion and there is a lot to do! Who knows maybe you will run into one of your favorite stars or writers while walking around in a CVS or around a hotel lobby.

I am definitely going to try and attend every year if I can and I hope to see you guys there.

Here are some pictures from Dragon*Con more will be on our Facebook page and in this gallery.

Love to read, like making lots of friend just got into makeup effects and am a huge werewolf nut lol.
Previous New Video Game Releases for September 2nd
Next Dragon*Con 2014 Gallery