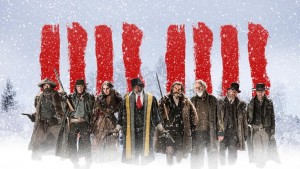 Note: This review refers to the “Roadshow” version of the film

Long before writer/director Quentin Tarantino’s eighth film, aptly titled The Hateful Eight, debuted on the big screen, much was made of its production, from the leaked script that caused Tarantino to withdraw from making the film, to his change of heart and his decision to film the movie in Ultra Panavision 70 (70mm anamorphic), to his fit of pique when he found out the film would not be screened in the Cinerama Dome at the Arclight Hollywood in California. Considering the opening credits state The Hateful Eight was filmed in “Cinerama,” that last bit was a particularly harsh blow to some Tarantino-loving cinephiles.

Despite that setback, the film is currently screening in select theaters in a glorious 70mm “Roadshow” version, which includes an overture and a 12-minute intermission, as was done back in the ‘50s and ‘60s for “event” movies (to learn more about this version, please go to http://thehatefuleight.com/roadshow). This is the version I saw and it’s completely worth spending extra money and time to seek it out (the digital version, to be released December 31, 2015, will be shorter).

The Hateful Eight is told in a series of six chapters, all with their own titles. It takes place in the same post-Civil War universe as Tarantino’s previous Western, Django Unchained, but in a different locale: the snow-covered terrain of Wyoming. There, in the midst of a terrible blizzard, nine strangers are forced to spend time together in a small cabin waiting out the storm.

In Chapter One, “Last Stage to Red Rock,” we meet our first set of characters as a stagecoach driven by O.B. Jackson (James Parks) stops on a snow-covered trail blocked by Major Marquis “The Bounty Hunter” Warren (Samuel L. Jackson). Marquis is stranded with a few dead criminals he was hauling in to collect a bounty. O.B. tells Marquis if he wants a ride, he has to speak to the stagecoach’s passengers.

Turns out the passengers are John “The Hangman” Ruth (Kurt Russell sporting fabulous facial hair) and Daisy “The Prisoner” Domergue. John, also a bounty hunter, is bringing Daisy to Red Rock to hang for her murderous ways. John reluctantly agrees to bring Marquis aboard. Soon enough, there will be another passenger, Chris “The Sheriff” Mannix (Walton Goggins), the new sheriff of Red Rock, and those five will eventually wind up at Minnie’s Haberdashery, a cabin along the road, to sit out the fast-approaching blizzard.

John, already aggravated that his trip to Red Rock to turn in Daisy has been delayed and that he’s got two strangers along for the ride, is less than pleased when it turns out Minnie is nowhere to be found. Instead, four other strangers are also waiting out the storm in the cabin: Bob “The Mexican” (Demian Bichir sporting a caricature of an accent); Oswaldo “The Little Man” Mobray (Tim Roth), who is to be the new hangman in Red Rock; Joe “The Cow Puncher” Gage (Michael Madsen), referred to by the others mostly as “The Cowboy”; and General Sandy “The Confederate” Smithers (Bruce Dern), who pretty much hates Marquis the moment he lays eyes on him.

Everyone save O.B. has some kind of secret (it is The Hateful Eight, not nine, after all), and it doesn’t take John long to get paranoid and express the belief that someone there is a complete liar who is biding his time to kill John (and probably everyone else) and save Daisy from her just reward. The film becomes a dance as the men begin feeling each other out via Tarantino’s signature snappy dialogue.

A lot of the fun of the film lies in observing those interactions. In this way, The Hateful Eight is reminiscent of Tarantino’s exploitation homage, Death Proof (2007); there’s a whole lot of talking before some explosive violence covers the screen in blood. Thankfully, Tarantino has again cast well, as each actor brings something unique to the story.

The best performance comes courtesy of Leigh. Her Daisy is a crackling, cackling joy, a woman who seemingly doesn’t care she’s being taken in to hang, who speaks her mind no matter how many times Russell’s John cracks her across the face with his fists (or elbow, or gun). She’s a deeply disturbed criminal, but she’s a lot of fun to watch. Russell also turns in a self-assured performance; with his fuzzy hat, furry coat, and spectacular facial hair, he resembles a big, brown bear (or a particularly pissed-off Winkie), and it’s no wonder the others prefer not to tangle with him.

Jackson gives a more understated performance in the first part of the film than he did as his Django Unchained character, Stephen. Marquis is not just a bounty hunter, but a major who fought for the North in the Civil War, which brought him into direct battle with Dern’s recalcitrant, flinty Sandy. Neither man is pleased to see the other. It doesn’t help that Goggin’s soon-to-be sheriff, Chris, was a Reb who continued to be part of an anti-black posse after the war. Chris idolizes Sandy; Goggins plays this idolizing in all sincerity, which makes the character’s later depth more affecting.

Everyone else does a great job, from Bichir’s funny, cabrón-spewing Mexican Bob, to Madsen’s quiet cowboy, to Roth’s overly British Oswaldo (he reminded me of a character from a Monty Python sketch at times—in a good way). Parks’ poor, put-upon O.B. also has his charms. Even Tarantino does well as the uncredited Narrator, who catches the audience up on a few things after the intermission (it will be interesting to see how that portion of the film is handled in the digital version, which won’t have the interruption).

Robert Richardson’s cinematography, especially of the snow-covered vistas, is beautiful, and alone justifies Tarantino’s insistence on filming in Ultra Panavision 70, although the in-cabin scenes are very well-shot, especially with the snowflakes fluttering around throughout the blizzard. The 70mm format does seem to bring an added warmth to the images that can be lacking in purely digital filmmaking. Also wonderful is Ennio Morricone’s score; it’s great to hear the master in such fine form.

While I enjoyed The Hateful Eight and I do recommend seeing it (especially if you can catch the Roadshow version, which includes a souvenir program), it isn’t quite as sharp a Western as Django Unchained. Still, the film is well-directed, and Tarantino’s ability to create characters worth spending a few hours with hasn’t diminished. If he decided to make nothing but Westerns from now on, I’d go see each one. Spend some time and a few extra bucks and seek out The Hateful Eight in a 70mm-capable theater near you.

Side note for my fellow Marvel nerds: Channing Tatum has a smaller role in the picture that requires he speak a little French. His accent, or lack thereof, does not bode well for his upcoming role as Gambit. This is not to say he didn’t do well in this role, but as Gambit? My misgivings have increased.

Have comments about the article? Let us know by continuing the discussion on our Facebook Group!

Désirée I. Guzzetta is a freelance writer and poet who loves movies, books, music, and nerdy things, not necessarily in that order.
Previous Ash Vs. Evil Dead Recap – Episode 9, “Bound in the Flesh”
Next Awesome Con 2015: It’s Morphin Time!