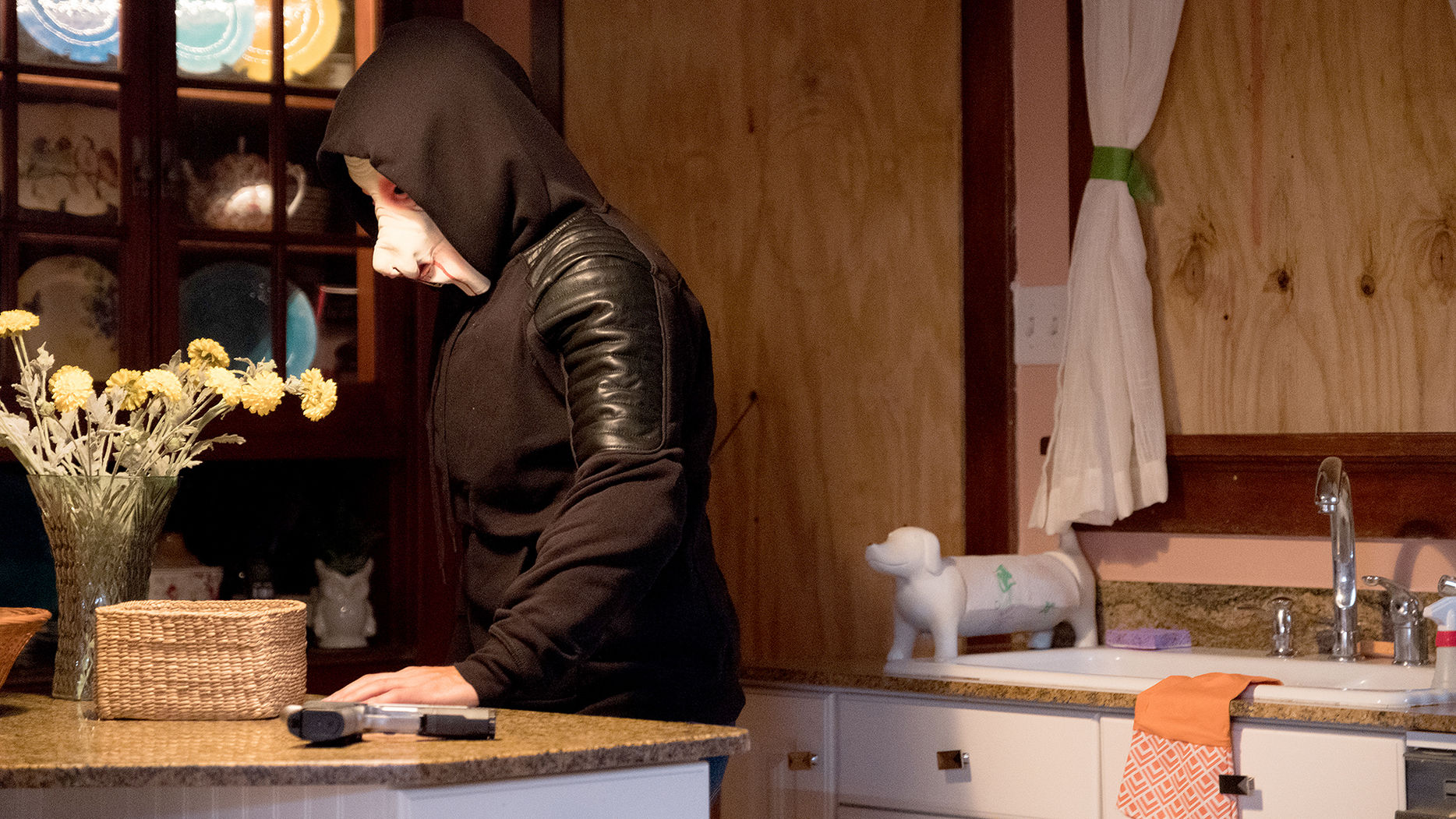 At the end of The First Purge (2018), the fourth entry in the now-franchise that began with 2013’s The Purge, audiences who stayed through the credits were treated to a teaser trailer for the upcoming TV series (also titled The Purge) on the USA Network. It was a nice surprise announcement for fans; it even surprised actors from the latest film installment.

“We didn’t know about it,” said Lex Scott Davis, who stars as Nya in the film. “We were like, ‘Oh, that’s awesome!’ because we’re all fans of the franchise.”

The Purge TV series is a joint effort between USA and the SyFy Channel, the latter of which will simulcast the premiere and season finale episodes, and stars Fiona Dourif, Amanda Warren, and Gabriel Chavarria, all of whom were present, along with Davis and producer Brad Fuller, at roundtable interviews at San Diego Comic-Con (SDCC) 2018 to promote the show, which begins September 4th at 10 p.m./9 p.m. Central. The show also stars William Baldwin and Reed Diamond.  There will be 10 episodes covering one Purge night, which takes place 10 years after the events depicted in The First Purge.

Fuller and Davis sat down together for an interview at SDCC to discuss the Purge franchise as a whole, as well as the new series. Fuller is a prolific producer whose credits include all of the Purge films and this year’s horror hit, A Quiet Place, as well as TV series The Last Ship (2014-18), Tom Clancy’s Jack Ryan (2018), and Black Sails (2014-17). Davis’ previous roles include Georgia in SuperFly (2018), Toni Braxton in the TV movie Toni Braxton: Unbreak My Heart (2016), and Alyse Craig in the TV version of Training Day (2017).

The Nerd Element asked whether Davis felt the energy of the political commentary while she was filming The First Purge.

“It’s right there in your face,” she said. “There’s images depicted, there are costumes and masks that are worn that say a lot without saying anything at all,” she continued. “You could definitely feel it. It came to life when we were there filming it.”

The Nerd Element also asked if Davis would be in the TV show, to which Fuller responded, “She was unavailable to do the show. She was filming the movie.” Davis laughed.

“It’s 10 years later and I believe some of the characters have family members who died during my Purge,” Davis said, to which Fuller noted, “That’s true.” Davis added, “I don’t think we’ll see the same actors again just because of the time depicted and just like the rest of the franchise, you see new faces.”

When The Nerd Element asked about the new series, comparisons to the movies inevitable came up.

“Honestly, the show is different from the movie,” Fuller said. “There’s a much longer time to get to know these characters that allows us the ability to see how the Purge affects their life before the Purge happens, and how it affects your life going into the Purge, and the questions they ask themselves. [I]f they want to participate in the Purge is kind of a key component to the television show.”

“Whereas in the movie,” Fuller noted, “it feels like Lex’s character’s thrust into this horrible, horrible situation where she’s trying to do the right thing, and all around her there’s hell” Fuller added that Nya is “the moral fiber of the movie to maintain some optimism in a very negative world.”

“For the television show,” Fuller noted, “we don’t know if anyone’s going to tune in or not. I’m hopeful, I’m really hopeful that they do.” Fuller said that the show depicts more of the effect on the character’s lives, adding that “it’s not as violent as the movies are. And there is a part of that violence that people respond to, and as a company that predominantly makes horror movies, we love that part of moviemaking and making those types of films, so we’ll see where it goes.”

Fuller also took a deeper look into the movies versus what audiences can expect from the show, saying that the “stories that we tell in the television show—I’m not sure they work in a movie.” Fuller said the show “feels different” from the films; whereas the movies are more quickly paced to deliver action, in the show, “the pacing is a little bit slower and a little bit more methodical. I think James [DeMonaco, producer and creator of The Purge films and show] just had stories in his head that he wasn’t able to fit into the movie,” he said.

The Nerd Element asked if the series would show more of what life is like on non-Purge nights because the movies don’t really have time to expand on that. Fuller said that “the show predominantly takes place on Purge night, but in order to understand the situations that all of our characters are in, you have to see what their life was before that. [T]hat’s what you get with the show—you have the time to show that, to get to feel what these people are.”

One thing the show will have less of than the films is the level of gore audiences have grown to expect from a Purge entry. Fuller began that the show is “not as grisly as the movies,” and that scenes of violence are shot differently, including “a scene where someone is getting hacked to death [that’s] done in a, dare I say, artistic way because there’s not meat flying everywhere. It’s in silhouette.” Fuller noted that he didn’t know “if that would work in a movie, but it certainly works in the TV show.”

Fuller responded to another question about the pacing of the show that it would not be a 24-style real-time telling of a Purge night. He said that he didn’t “want to say that it’s soapy because that would be the wrong way to characterize it,” adding that “it’s a group of characters who have nothing to do with each other who all have an agenda on that night; you learn where that agenda came from and you wonder whether or not they’re going to execute what they want to execute.”

“It’s not all of them wanting to kill someone,” he noted. “Some of them want to keep someone from getting killed.” But for those who do want to kill someone for the first time, the TV series will delve into the toll it takes “on your soul and your conscience,” Fuller said.

Will the television version be the fifth installment of the franchise or not?

“My answer might be different from my other partners, [Jason] Blum [one of the Purge producers and the founder and CEO of Blumhouse Productions] and DeMonaco,” Fuller stated, “but at the end of the day, I wouldn’t want to keep them separate. I would want to keep the movies going. I think the two lead characters in the most recent Purge are incredibly likable, and as a viewer and a fan of the franchise, I would want to see what happened to them after this Purge happened, so I would definitely want to do another. I’d want to do a fifth Purge and see where that goes.”