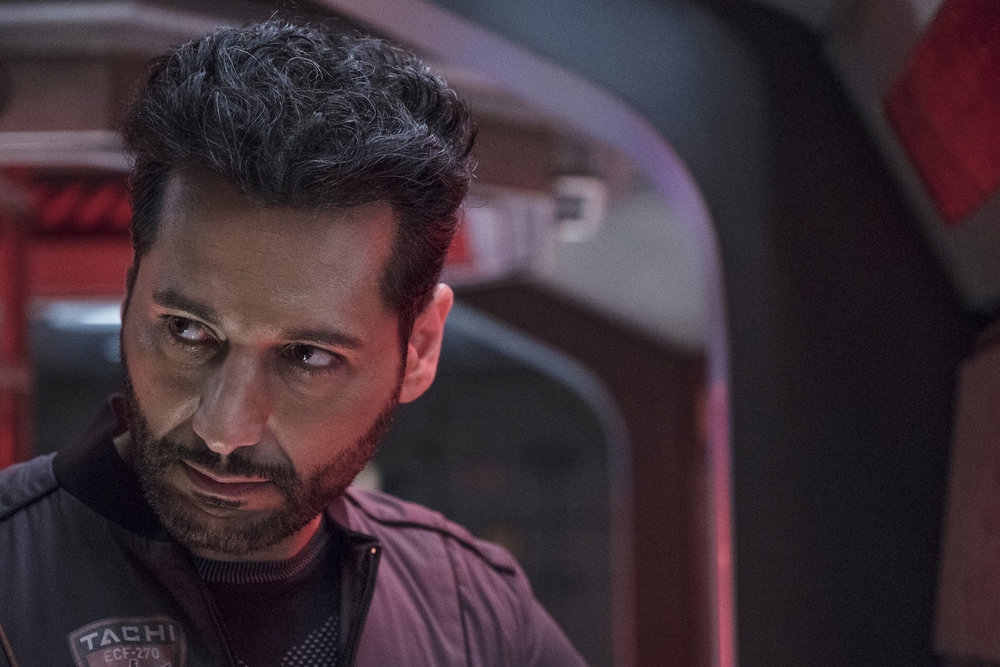 Dragon Con has been on my bucket list of conventions to attend. From Thursday, August 30 through Monday September 3 an estimated 85,000 fans will descend to Atlanta, take over five major downtown hotels, and geek out 24/7.  Finally, I will be there this year as a newbie!

I will not be the only newbie at the convention.  Four of the cast members from the show “The Expanse,” will also be in attendance.  When Dragon announced the cast coming I got super excited! I am ecstatic that Amazon picked up the for a 4th season!

Cas Anvar, who plays Martian Alex Kamal, was gracious enough to talk with me about Dragon Con.  It is always fun to talk with Anvar about the show and now about the con.  Enjoy!

Cas Anvar:          Oh, my God! First time going to Dragon Con, and you can’t even imagine how excited I am, and we all are. I have heard nothing but spectacular things about Dragon Con and I have been chomping at the bit to go for years. And you know, I heard that if San Diego Comic-Con is kind of like the biggest corporate Con in the world, I’ve heard that Dragon Con is the equivalent for the fans. It’s like the biggest fan-oriented Con in the world. And it’s the place to be if you’re a fan or an artist and you want to just have the best, most incredible time on the planet.

Cas Anvar:          Hmm. Let’s see … I mean, I’m a huge fan of these hardcore, professional cosplayers ’cause the work that they do, the artistry, the professionalism . . .  They make costumes that are beyond even film quality, and I’m amazed by that. I’m a big fan of the really good Wolverine stuff, and Avengers stuff. But if we’re gonna see something from the show, I haven’t seen a real good Alex Kamal. I have not seen that yet. So, I would love to see that. I would love to see a protomolecule Julie Mao.

Cas Anvar:          Haven’t seen many of those yet. Or just a really hardcore tattooed, scarf tied Belter.

Cas Anvar:          Like one of the more extreme OPA Belters that do some real crazy shit with their hair and their tats.

Cas Anvar:          Oh yeah, I mean that … you’re right, actually. That’s gonna actually require a lot of work, but if you wanna build a Goliath armor, one of Bobbie Draper’s war machines, that would be phenomenal. That I have not seen. I haven’t seen the Martian Marines, like the armor that we wear on the Roci, or definitely haven’t seen Bobbie’s armor.

TNE:                     Are there any places that you haven’t had a chance to go to before, but now hopefully you may be able to get to go? Or is it just mostly gonna be DragonCon, but you’re just happy to go to DragonCon anyway?

Cas Anvar:          You know what, I’m gonna be there for quite a few days, actually. I’m flying in I think … if everything goes well, I’m flying in on the 29th, ’cause there’s a lot of press that they’ve got me doing. So I’m actually gonna have some good amount of time to explore. I’m gonna be staying until the Con is over on the 2nd or the 3rd. I am looking forward … the only thing I can think of off the top of my head, because I haven’t done my research yet, I’d love to visit the set of The Walking Dead. But I don’t know if that’s gonna happen.

Cas Anvar:          Yeah. But I will say this, I was working on a film in Europe about two, three weeks ago called The Operative. And the lead of the film is Diane Kruger, who is very very much in love with Norman Reedus, who is one of the leads on The Walking Dead. So maybe I can pull that string.

Cas Anvar:          Let’s do it, man. Let’s do it. I can’t wait. And what I would tell the fans is that the four of us are gonna be there for three panels. We’re doing one panel every day, and we’re doing signings every day, and we’re doing photo ops every day. And this is the first time the cast has come together to thank the fans for saving the show, because it literally was the fans that moved the mountain that got Amazon to pick us up. And this will be the first time that we have come together as a group to say thank you.

Cas Anvar:          And we are absolutely thrilled to be doing that at DragonCon, which is the penultimate fan convention in the world. So, come out in droves, and come see our three panels. There’s two topics: one is gonna be called “The Science of The Expanse, which is gonna be all the amazing science that we integrate into the show. . . We really use science as a character, and we use science to make the drama in the show even more intense. Which is very different than pretty much all other science fiction TV out there. They usually invent rules, and reinvent science. So we love that claim to fame.

And the other panel is going to be the . . . it’s called “Space Race: The Mosaic of The Expanse.” And it [is] really . . . very important aspect to television right now. And it is the diversity in the show. We’ve been hailed for our scientific accuracy and we’ve been hailed in the press and in the fandom for our ethnic diversity, and gender diversity in the sense that we have some of the most powerful female characters on TV in our show. Many of them are not white. So, we have like . . . in Season Three, we have eight female characters, and 70, 80% of them are not white. None of them revolve around a man, and all of them are pivotal and absolutely critical to the advancement of the stories. Many of whom save our butts.

Cas Anvar:          Right! And Drummer, let’s not forget Drummer. Drummer’s an amazing character who is a butt-kicker all to herself.

Cas Anvar:          Right, right. She does not let them forget who’s boss. So yeah, it is an incredibly diverse show, and we think that’s incredibly important and we’re having an entire panel where we’re going to be showing clips from the show, showing videos of the characters, and talking to the audience about how important it is to them to see a show where the world around us is being so well-represented and so accurately represented in terms of its ethnic and gender diversity. So those are our two panels.

Stay tuned for Part 2 of my conversation with Anvar talking about season 3!

What are you most looking forward to at Dragon Con? Sound off below in the comments!