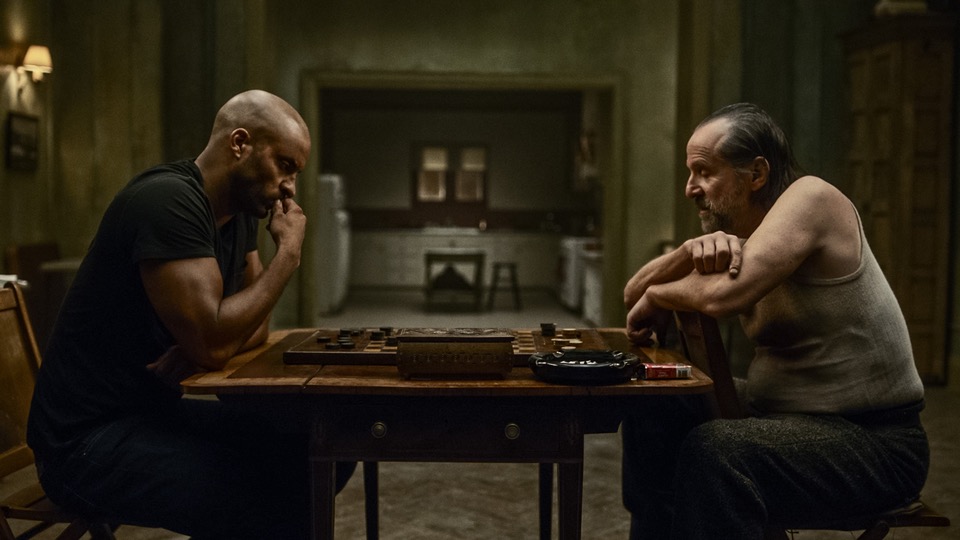 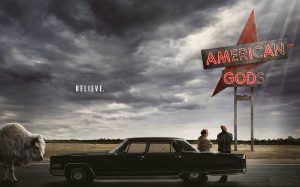 Note: These recaps are being written from the point of view of someone who has not read the book. They are spoiler-free of any upcoming events, and do not go into the differences between novel and show. Mostly because…I have not read the book. Please refrain from commenting on the novel here so others who are like me shall remain similarly unspoiled.  Also because TV and literature are different media, blah blah blah. Thank you! Now let’s dive into the mayhem! Please note that some language in the quotes some may find offensive. These are just quotes from the show.

Previously on “American Gods”: The impossibly poetically named Shadow Moon (Ricky Whittle) was released from prison two days early because his wife, Laura (Emily Browning) was killed. Shadow, who is prone to visions, is recruited by Mr. Wednesday (Ian McShane) for a mysterious job. Shadow meets Mr. Wednesday’s associate, Mad Sweeney (Pablo Schreiber), who is a rather tall leprechaun and who likes picking fights. At Laura’s funeral, Audrey (Betty Gilpin), widow of Shadow’s best friend, Robbie, who died in the same accident, tells Shadow that Laura was cheating on him with Robbie. The Technical Boy (Bruce Langley) questions Shadow about Mr. Wednesday’s plans, and when he is dissatisfied with the answers, has Shadow lynched by his faceless minions. An unseen person rescues Shadow, leaving a superbly bloody mass of limbs and torsos behind. Meanwhile, somewhere in America, a woman named Bilquis (Yetide Badaki) eats a man whole through her vagina.

“The Secret of Spoons” advances the story of “American Gods” slowly, filling in bits of information, but still leaving the audience, like Shadow, mostly in the dark as to what exactly is going on. Before we pick up with Shadow’s story, though, we go back to the man from the beginning of the premiere, who this time is writing about “Coming to America 1697.” We first see a fuzzy, colorful spider (which may or may not be a peacock spider, or a Phippidus, and also, I’m terrified of spiders and just spent way too much time looking up varieties of colorful fuzzy spiders to figure out what this one is, and am completely creeped out now. Thanks for nothing, “American Gods”!). Anyway, the spider is in a slave ship, down in the hold where the slaves are chained together.

One of the slaves is sing-praying to a god named Anansi, which seems to summon him in the form of Mr. Nancy (Orlando Jones), who looks quite snazzy and colorful—although unlike his spider form, he’s not fuzzy. Mr. Nancy informs the slave that the slave’s mom was thrown off the boat. Mr. Nancy tells the slave the story of black people in the world, that they will be slaves in America and be worked to death. He tells them they will all “be fucked for hundreds of years to come.” Mr. Nancy incites them to get anger, exhorting them to rise up, slit the throats of “the Dutch motherfuckers” and burn the ship. Another slave notes they will die, too, if they burn the ship, but Mr. Nancy informs them that they’re already dead; he sets the guy who prayed free, who in turn frees the rest. They set the boat on fire. Mr. Nancy, back in spider form, emerges unscathed. I, however, am scarred for life by the sight of Mr. Nancy’s human form with a fuzzy spider head.

Back to Shadow, who is getting staples in one of his wounds and does not want to call the police (not like he can tell them he was in a virtual limo and attacked by faceless men anyway). Shadow goes to Mr. Wednesday’s room at the Motel America and asks, “What the fuck did you do?” Shadow lets Mr. Wednesday know about the virtual limo and how he was turned into “strange fruit” (i.e., lynched—Shadow’s life is bearing out what Mr. Nancy told the slaves in 1697). Mr. Wednesday offers to pay him double, but won’t tell him his plans, although he says he’s insulted by what happened to Shadow. (Considering the deeply racist way the Technical Boy’s minions handled Shadow, being insulted seems to me a mild reaction. I’ll withhold judgment until we see how Mr. Wednesday handles the insult, though.)

In his own room, Shadow imagines he sees Laura; she calls him Puppy. He wakes from the dream, crying. When he returns to their home to collect his things, he sees Laura in every room. He starts packing, but is drawn to a box from the coroner’s office. He goes through it, finding Laura’s wedding ring and phone. On the phone, he sees texts and a dick pic from Robbie, after which Shadow scrubs the house down until he bleeds. Poor wounded Shadow!

Mr. Wednesday shows up and drops some harsh truth about how Laura died, but Shadow already knew that from Audrey’s drunken tirade. As they drive off to the sounds of Creedence Clearwater Revival’s “Bad Moon Rising,” Mr. Wednesday does coin tricks, a motif that continues from the first episode. Mr. Wednesday has them get off the main highway for a dirt road, stating, “Let there be beauty where there can.” He says they are going to meet some “pre-eminent” people after a stop in Chicago. Mr. Wednesday blows a dandelion’s seeds up into the clouds and they spark a lightning storm. I’m not yet sure what sort of god he is, but I like him.

While Shadow is shopping off the list given to him by his new boss, he sees an episode of “I Love Lucy” on the store’s TVs and Lucy Ricardo (Gillian Anderson) begins talking to him. She also wants to offer him a job working for her. She represents the future; Mr. Wednesday is the old guard. Media (her goddess name) says she heard Shadow had trouble with the Technical Boy, but he held his own. Shadow turns her job offer down.

Shadow meets Mr. Wednesday later at a diner; Mr. Wednesday is talking to some guy whose eyes glow red. Shadow tells Wednesday he thinks he’s going crazy because “I Love Lucy” talked to him. Mr. Wednesday says they are building a vocabulary, but Shadow wants to know what’s going on (unlike many shows where the main character goes through weird happenings without asking questions, Shadow questions everything—he just doesn’t get any straight answers). Mr. Wednesday tells him he has to learn what’s going on on his own. Shadow says the others threatened to reprogram reality, but Mr. Wednesday talks about sacrifices they may have to make that are bigger than “going a little mad.” At this point, I’d quit the job, but Shadow is bound by the three shots of mead he consumed in the premiere.

While Shadow was out, he bought Mr. Wednesday a cell phone, but the god pitches it out the window along with Shadow’s cell.  Mr. Wednesday remembers the telegraph; he remembers the old ways. We’re then treated to another interlude, a psychedelic scene into space where a naked man with an erection floats by. This leads us back to Bilquis, who’s just eaten another man. And a woman. And another man. And another woman. At least they get to climax before she swallows them inside her. Bilquis then heads to a museum, where she views a fertility statue, along with jewels displayed in a case. A body begins to rise up under the jewels, then sinks back down.

Czernobog, a coarse man, wants to throw Mr. Wednesday out, and is upset his sisters invited Mr. Wednesday and Shadow to dinner because now he has to dine with him or be considered rude (truly, they are bound by the old ways—of etiquette!). Mr. Wednesday wants Czernobog to accompany him to speak with some people. Czernobog says they’d rather have his brother, but his brother ain’t coming. Apparently, the brother was the good son, and Czernobog was the black sheep. Czernobog speaks wistfully of how he used to kill cattle before the invention of the air gun: “To give a good death is art,” he says. He’s creepy. I like him!

After dinner, Shadow plays checkers with Czernobog, a parody of the Knight playing chess with Death in Ingmar Bergman’s The Seventh Seal. Czernobog shows Shadow his old hammer he used to kill cows with; Shadow sees blood dripping from it, but the blood isn’t really there. Czernobog makes a deal with Shadow; if he loses, he will go with them, and if he wins, he will knock Shadow’s brains out with his hammer at sunrise. Shadow takes the bet. Czernobog sings as he takes Shadow’s checkers piece by piece. As Shadow continues to lose, he keeps imagining Czernobog killing a cow with the hammer. Upon his victory, Czernobog says he will have Shadow kneel down at sunrise and bash his brains in. End episode.

The teleplay by Michael Green & Bryan Fuller slowly begins showing us more of how Mr. Wednesday and his peers’ world operates. Although Shadow doesn’t appear to be grasping what is happening, it seems to be building toward a classic clash between the old guard and the new. The old gods, represented by Wednesday, Czernobog, and the Zoryas, have been forgotten and/or replaced by the new (represented so far by Media and The Technical Boy). Others, such as Bilquis and Mr. Nancy, consume in some fashion those that interact with or call upon them. Where does Shadow fit in a world where he clearly has sensitivity to the realm of the gods, but doesn’t understand them? Who’s the Man writing these stories? Is Shadow truly going mad, meaning every supernatural thing we’ve seen is a lie? Where is this all leading? I don’t know, but I’m enjoying the journey. The symbolism is intriguing, the recurring motifs have me formulating ideas of what is to come, and the imagery, as in the first episode, is gorgeous. How will Shadow get out of being brutally—but artfully—murdered by Czernobog? I guess I will have to tune in next week!