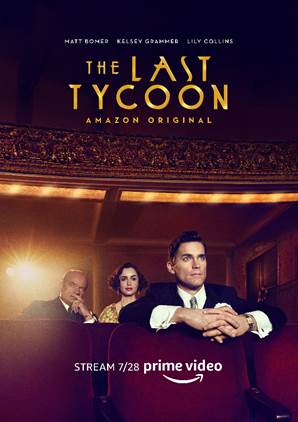 Amazon today announced that The Last Tycoon will debut on July 28th exclusively on Prime Video. The series is based on the last work from F. Scott Fitzgerald and stars Matt Bomer, Kelsey Grammer, and Lily Collins. More information below courtesy of their press release. 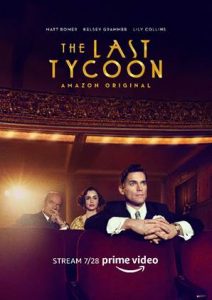 Amazon Original Series The Last Tycoon, Based on the Last Work of F. Scott Fitzgerald, Debuts Exclusively on Prime Video on July 28

All nine episodes of the original dramatic series—starring Matt Bomer, Kelsey Grammer and Lily Collins, and executive produced by Academy Award nominee Billy Ray and Christopher Keyser—will be available globally on Prime Video in more than 200 countries and territories

SEATTLE—June 2, 2017—(NASDAQ: AMZN)—Amazon today announced its new original one hour series The Last Tycoon, starring Golden Globe winner Matt Bomer (White Collar, The Normal Heart), multi- Golden Globe and Emmy winner Kelsey Grammer (Frasier, Boss) and Lily Collins (The Blind Side, The Mortal Instruments: City of Bones), will premiere on Friday, July 28 exclusively on Prime Video. From F. Scott Fitzgerald’s last work, which celebrated its 75th anniversary last year, The Last Tycoon—inspired by the life of legendary film mogul Irving Thalberg—follows Hollywood’s Golden Boy, Monroe Stahr (Bomer) as he battles father figure and boss, Pat Brady (Grammer) for the soul of their studio. In a world darkened by the Great Depression and the growing international influence of Hitler’s Germany, The Last Tycoon illuminates the passions, violence, and towering ambition of 1930s Hollywood. Customers can watch the pilot episode online at Amazon.com/The-Last-Tycoon before the full season’s remaining eight episodes air on July 28. The show will be available on PrimeVideo.com for Prime Video members in more than 200 countries and territories around the globe.

“It’s thrilling to watch F. Scott Fitzgerald’s extraordinary work brought to life through the eyes of Billy and Chris, and this incredible cast,” said Joe Lewis, Head of Comedy, Drama and VR, Amazon Studios. “This great team has created a stunning portrayal of 1930s Hollywood. We’re excited to share the series with Prime members this summer.”

Prime members will be able to stream The Last Tycoon exclusively via the Amazon Prime Video app for TVs, connected devices including Fire TV, mobile devices and online. Members can also download the series to mobile devices for offline viewing at no additional cost to their membership.

The Last Tycoon was part of Amazon’s pilot season last year, a unique development process that gives all customers an opportunity to stream and review pilots in order to help choose the next Amazon Original Series that are then made available to Prime members. Below are what customers have said about the pilot:

The entire first season of The Last Tycoon will be available for Prime members to stream and enjoy using the Amazon Video app for TVs, connected devices including Amazon Fire TV, and mobile devices, or online at Amazon.com/The-Last-Tycoon, with other Amazon Original Series online at Amazon.com/originals, at no additional cost to their membership. Eligible customers who are not already Prime members can sign up for a free trial at www.amazon.com/prime. For a list of all Amazon Video compatible devices, visit www.amazon.com/howtostream.