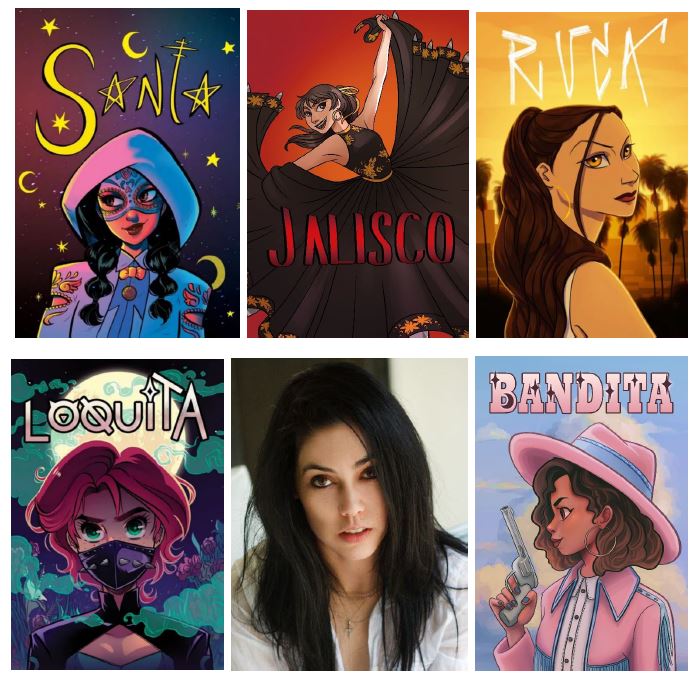 San Diego Comic Con International is dedicated to creating the general public’s awareness of and appreciation for comics and multi-genre entertainment. Now 51 years strong being the organizer of the annual pop culture celebration. Creator/Writer Kayden Phoenix, having been a long-time full pass attendee herself, is proud to see herself on the other side of the table. Her publishing company, Phoenix Studios, created a universe of Latina Superhero graphic novels called A La Brava.

Combine Phoenix’s vision with a fresh-eyed Latina artist team like acclaimed GLAAD and Eisner-nominated illustrator, Eva Cabrera (SANTA, LOQUITA) and newcomer Amanda Julina Gonzalez (JALISCO, RUCA), an uprooted New Mexican who recently graduated from Laguna College of Art and Design in Animation, and you get beautiful and inspiring crafted pieces of art.

JALISCO, a blade-wielding folklorico dancer that uses her culture as her weapon. SANTA, a brawler that takes down the ICE detention centers. LOQUITA, a teen detective in the supernatural world. RUCA, a vigilante taking justice. BANDITA, the gunslinger in modern day New York.

Though a relatively new Universe, only the first three Latina superhero books are out, ComicCon@Home asked A La Brava to return after her WonderCon panel earlier this year. Kayden Phoenix and Amanda Julina Gonzalez are grateful to be in ‘Abolishing Traditional Ideas of Latinas through Latina Superheroes’ panel (Fri July 23rd at 5pm PST) with industry experts Dr. Drea Letamendi (clinical psychologist and host of Arkham Sessions podcast) and Frederick Luis Aldama (Eisner-Awarded professor).

“Comic book superheroes give kids something to look up to and it helps if those heroes look something like the kids.” – ABC Eyewitness News 7

“Everyone needs a superhero, but if you’re a woman or a person of color, chances are you won’t find yourself reflected on the big screen, much less a comic book.” – Spectrum News 1