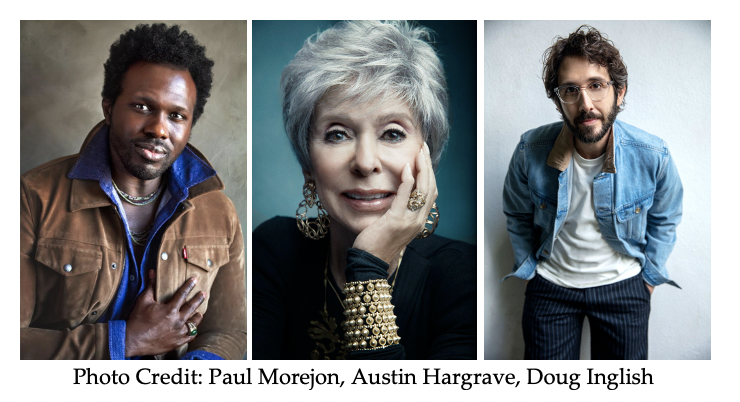 ABC ADDS SERIOUS STAR POWER TO ITS UPCOMING
‘BEAUTY AND THE BEAST: A 30TH CELEBRATION’ SPECIAL’

The One-Night-Only Celebration of the Classic Film Airs Thursday, Dec. 15

During today’s panel at D23 Expo 2022, ABC shared a slew of casting announcements for the upcoming animated and live-action blended special, “Beauty and the Beast: A 30th Celebration.” Tony®-, Emmy®– and GRAMMY®-nominated artist Josh Groban, who previously recorded a song for the 2017 “Beauty and the Beast” live-action movie, will play the baneful Beast. Tony- and GRAMMY-nominated acclaimed Broadway star Joshua Henry has been tapped to play antagonist Gaston, while EGOT winner and legend Rita Moreno will serve as the night’s narrator, taking viewers on a journey through the classic enchanted tale. Presented by The Wonderful World of Disney, the highly anticipated two-hour reimagining of the beloved story of “Beauty and the Beast” will be taped in front of a live audience at Disney Studios and will air THURSDAY, DEC. 15 (8:00-10:00 p.m. EST), on ABC and on Disney+ the next day.

As previously announced, five-time GRAMMY- and Academy Award®-winning singer-songwriter H.E.R. will play the role of Belle, with Jon M. Chu set to executive produce the special, and Hamish Hamilton set to direct. Additional talented cast, whose performances will be seamlessly woven through the original feature film, will be announced at a later date.

Tony, EMMY, and four-time GRAMMY Award-nominated singer, songwriter, actor and philanthropist Josh Groban possesses one of the most outstanding and instantly recognizable voices in music. Moreover, he continues to captivate fans everywhere as both a powerhouse vocalist and dynamic renaissance man. He has sold over 35 million albums worldwide, headlined legendary venues on multiple continents, and entertained audiences with acclaimed film and television appearances. His catalog spans a series of chart-topping blockbuster albums, including “Josh Groban” (five-time platinum), “Closer” (six-time platinum), “Noël” (six-time platinum), “Awake” (two-time platinum), “Illumination,” “All That Echoes” (gold), “Stages” (gold), his first UK No. 1 album, “Bridges,” and his most recent release, “Harmony.”

Extending his repertoire, Groban made his Broadway debut in 2016 with a starring role in “Natasha, Pierre & The Great Comet of 1812.” He garnered a Tony Award nomination for Best Lead Actor In A Musical. He has expanded his presence with appearances on “Glee,” “The Simpsons,” “The Office,” “CSI: NY,” “It’s Always Sunny in Philadelphia” and “The Crazy Ones” as well as in the feature films “Coffee Town,” “Muppets Most Wanted” and “Crazy, Stupid, Love.” In addition, he starred in the NETFLIX series “The Good Cop” in 2018. In spring 2023, Groban will once again grace the stages of Broadway in the revival of “Sweeney Todd,” playing the title role. He remains an active arts education philanthropist and advocate, and his Find Your Light Foundation helps enrich the lives of young people through arts, education and cultural awareness.

Joshua Henry is a GRAMMY-nominated performer and recording artist best known for his Tony-nominated leading roles in “Carousel,” “The Scottsboro Boys” and “Violet,” as well as for his show- stopping performance as Aaron Burr in the cultural phenomenon “Hamilton” (Chicago/San Francisco/Los Angeles). A BMG recording artist, Henry’s debut album, “Grow,” is available worldwide on all streaming platforms. On screen, he starred as Roger Bart in the Academy Award-nominated film “Tick, Tick, Boom,” directed by Lin-Manuel Miranda. He also starred as Jerlamarel opposite Jason Momoa in two seasons of Apple TV+’s show “See.” Other Broadway shows include “In the Heights,” “Shuffle Along,” “American Idiot,” “Porgy and Bess,” “Bring It On: The Musical,” “Off-Broadway: In the Heights” and “The Wrong Man.” Henry can currently be seen starring on Broadway in “Into The Woods.”

Rita Moreno has won all four of the most prestigious awards in show business: two Emmys, a GRAMMY, an Oscar and a Tony. Her countless credits span more than seven decades, beginning with her Broadway debut at age 13. Moreno has starred on Broadway and London’s West End, appeared in more than 40 feature films and countless television shows, and has performed in numerous regional theaters including her one-woman show, “Life Without Makeup,” at the Berkeley Repertory Theatre.

Just recently, Moreno wrapped production on two films: “Eighty for Brady,” starring opposite Sally Field, Jane Fonda and Lily Tomlin; and “Fast X,” where she plays Vin Diesel’s grandmother. Last year, she co-starred and served as an executive producer on Steven Spielberg’s remake of “West Side Story.” For four seasons, Moreno co-starred in the critically acclaimed Latinx reimagining of Norman Lear’s classic TV sitcom, “One Day At A Time.” Moreno has received the Presidential Medal of Freedom by President George W. Bush and the National Medal of Arts by President Barack Obama.

ABC programming can also be viewed on Hulu.

About Done+Dusted
Done+Dusted is a global entertainment group with offices in Los Angeles, London and Abu Dhabi and the preeminent producer of live television events in the world; creating and capturing the moments that make headlines and shape culture. Whether it is producing “The Emmys,” “The Little Mermaid Live!,” “Mariah Carey’s Magical Christmas Special,” “The Disney Family Singalong”– or any of the other 300+ productions D+D have bought to life, everything they produce bears the distinct badge of quality that makes it, unequivocally… Done+Dusted.

About Electric Somewhere
ELECTRIC SOMEWHERE is the production company of filmmaker Jon M. Chu, who runs the company with his television producing partner Caitlin Foito. Chu is known for impactful representation through meaningful spectacle and Electric Somewhere is building on that brand through their multi-year overall deal with 20th Television where they have set up several high-profile projects including THE COMPANY YOU KEEP starring Milo Ventimiglia for ABC. Other projects are set at Hulu, FX, Disney+, and Netflix.