Nerds love just about everything. And for every thing that nerds love there seems to be a con, or convention.

Despite openly declaring myself a nerd, I had yet to have actually gone to a con.

That changed last weekend when I was invited to accompany my trainer to Dragonfest.

Just as a bit of background, I LOVE LOVE LOVE anything related to martial arts. After being exposed to kung fu movies, my best friend, my brother, and I spent our high school weekends perusing the racks at Blockbuster video. Every weekend we had the same quest: to find the perfect kung fu movie.

We watched everything we could get our hands on. We were introduced to Jackie Chan, Jet Li, Bruce Lee, Sammo Hung, Yuen Biao, Donnie Yen, Cynthia Rothrock, Benny “The Jet” Urquidez, and Don “The Dragon” Wilson, just to name a few. We were amazed that people could move that way. Fights were like dances.

When the weekend was over, we couldn’t wait until the next weekend so we could find some more movies to watch.

Sadly, none of us ever decided to pursue martial arts. We talked about how cool it would be to study them, but that’s as far as we ever got.

Eventually we grew up, got married, and had kids. Nothing ever came of those dreams.

I got fat(ter) in my old age and wanted to find a way to get back in shape. Coincidentally a family friend had been studying kenpo for most of his life and was thinking about teaching.

Three weeks ago, my trainer mention that there was a trade show he was planning on going to called Dragonfest and wanted me to accompany him as a sort of field trip.

It wasn’t until we walked in the door that I realized that this was a martial arts convention. The people attending were all kung fu nerds. I felt right at home.

Even better, within 30 seconds of walking in the door I came face to face with Cynthia Rothrock. I could barely get out the words to ask her to take a picture with me. I had a huge crush on her when I was 17. Now I’m 38, and I have to say it’s worse. She looks even better now. 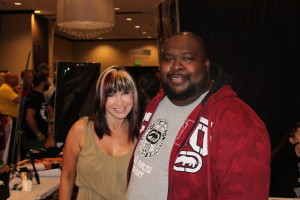 Before I could even catch my breath, I locked eyes with Benny “The Jet” Urquidez. This man has been in many of the greatest kung fu movies, usually playing the villain with a scowl that would make any man think twice about facing him. Only now he was smiling and laughing and telling me about his school in Woodland Hills. 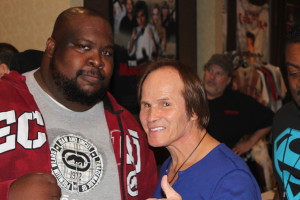 You mean, I can drive to Wooodland Hills and be taught by the man who was in, what many call the greatest martial arts fight ever caught on camera, in Wheels on Meals?

I was in heaven.

Don “The Dragon” Wilson was at the next table selling movies, taking pictures, and telling everyone about the movies he’s been in. 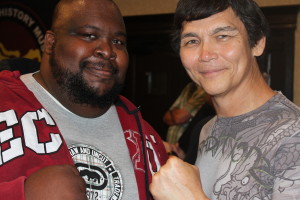 Sasha Mitchell was there. Yeah, that Sasha Mitchell. You know, Cody from Step by Step, who also took over the Kickboxer franchise after Jean Van Claude Damme left.

There was also martial arts royalty in attendance. Those who study Kenpo also learn of Ed Parker, the man who developed the art to its current form, bringing it to the United States, and teaching it to people all over the country. His son, Ed Parker, Jr continues this journey, while also teaching something new called paxial arts. This is a less violent art where instead of punching and kicking, you are redirecting and parrying incoming attacks, using your attackers own weight and momentum to beat them. It’s amazing to be seen in person.

All around the convention, there were more famous people that I had grown up watching. There were weapons on display. There were new movies being announced. 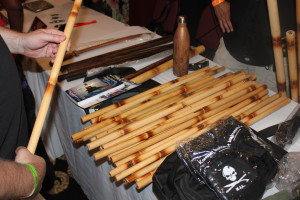 By the time we left, I felt like my head was going to explode, and I wanted to turn around and go back inside to start over again.

I will definitely be attending more cons in the future, martial arts and otherwise.