Recently I had the opportunity to interview the Director (Gulliver Parascandolo) and Producer (Christine Kasal Parascandolo) of Cosplay Dreams 3D on the eve of their red carpet screening in San Diego.

The movie brings the fantasy of “Costume Play” to life using groundbreaking 3D visual FX, while also telling the heartfelt and inspirational stories behind Cosplayers both young and young-at-heart. People from all walks of life transform into iconic figures from history, comic books, video games, TV, and film! From the battlegrounds of historical re-enactors, to the world-famous International Comic-Con in San Diego California, this documentary showcases the fun lifestyle and incredible artistry behind the global phenomenon of Cosplay! Featuring Cosplay superstar YaYa Han, YouTube sensation Traci Hines and hundreds of passionate artists!

How hard was it to get a documentary about cosplayers made? Did you have any naysayers?

Gulliver – With any film project that you do, there’s always plenty of adversity working against you, because of technical and financial limitations. Because I co-own a film company (Passage Productions) and we’ve been working together for 14 years, the hardest part was making the film. We were intrigued because of how cosplayers bring these characters to life. We took the production on the road on weekends, it’s a labor of love. Getting into the world of cosplay was something that happened organically, we met cosplayers who led us to other cosplayers that became the stars of the film. We encountered Yaya Han by accident when we got lost in a parking structure at WonderCon. We approached her about the movie and she was excited about it and that we were shooting in 3D. As went to cons and filmed with 3D, cosplayers would recognize us and we got great support from cosplayers. Our Facebook page (https://www.facebook.com/CosplayDreams3D?fref=ts) now has over 45 thousand follower. The cosplay community has continued to come out and we won best documentary at the 3D fest in Los Angeles this past December.

What was the inspiration for the project?

Christine – We are big fans of Comic-Con being that we live in San Diego, every year we went were always amazed by cosplayers. Seeing a Joker that looked like Jack Nicholson’s Joker. As well as how they embody the character, the time that they put in amazed us.

Did you have any preconceived notions about cosplayers that were shattered during the making of this film?

Gulliver – I think when we began, we were the same as most people. I guess we were surprised, how much they actually create by hand, I know most people assume they just go to Party City to buy costumes. Most outfits are crafted and are handmade with incredible skill. We were surprised by how much of a community it is, and how diverse it is. We encountered cosplayers from 5 to 75 year old, each with their own love of their genres, from anime to steampunk, to historical figures. We hoped to translate into our film some of that visual effect. Our documentary goes beyond a traditional documentary in that we want to bring the excitement that the cosplayers get when they personify that charactrer, we allow the cosplayers to see themselves as audience seems them. We were surprised by the diversity of the cosplay culture, one star of our movie is water polo athlete which is not the kind of person you’d think would be into cosplay. He does sports, but he found his true passion in cosplay. It’s a wonderful hobby for the entire family. When we went to an event on the Queen Mary we found entire families who dressed up together and it brought them together even more.

Why 3D?
Gulliver – Before we started we had filmed other projects in 3d, we realized what immersive experience 3D could offer. Cosplay is a 3d art form, being able to perceive in 3D adds so much more, it adds sense of weight, scale, and depth to intricacies to the costumes, and the environment were so incredible and stunning that 3D was a natural choice, and in my mind the only choice to really excite the audience the way we have. We’ve heard from cosplayers that our film has gotten them to see a documentary for 1st time, and the fact in 3D more so. 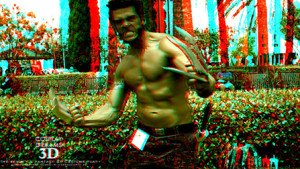 How many hours of footage did you have before starting the editing process?

Gulliver – We shot over 100 hours of 3D footage for this project which took us 1 and half years to do. The final runtime of the documentary is 75 minutes which is a little shorter than traditional films but longer than most 3D ones. We definetly want this to be more inspiring and be an overview of the cosplay community. Crafting the story and showing the 5 main characters that are focused on, but we also have side stories that give a broad picture of what the cosplay world is like.

What was the convention where you felt you had the most material from?
Gulliver -Tough to say, being that we didn’t want to make this feel like an advertisement for one particular convention over another but one of the more spectacular events that was focused on was Labyrinth of Jareth Masquerade Ball (http://labyrinthmasquerade.com/) in Los Angeles. It’s an immersive event where over 200 acrobats, cosplayers, and various other artists from various art forms help create a masquerade with various kingdoms. In order to attend you have to be in costume. For us to be able to be there and being able to film in 3D is something most audience members will have never seen before. People from all walks of life were equalized by the magic of cosplay there. 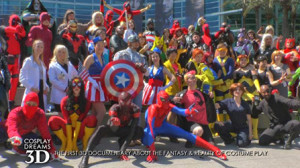 Which character would you cosplay as if given the chance?

Gulliver – We will be there in costume on Friday 9/21 in San Diego at the red carpet so you can find out then, but for those who will not be in attendance Gulliver will be dressed up as Tony Stark and Christine (who is 8 months pregnant) will be dressed up as Iron-Mom. We are always glad to put on costume when the time comes.

What genre of cosplay interests you the most?

Gulliver – That’s like asking to pick your favorite kid, we don’t have a favorite.

What do you hope to accomplish with this documentary?

Gulliver – We started off as investigation into world of cosplay and I think what we zeroed in on what cosplay world had to offer. We hope to show the world of cosplay in a positive light, for anyone who hopes to live a life where the passion guides their life path. Any artists who would appreciate the passion and commitment of people who join togehter to create something more them themselves.

This is a film intended for all ages, something that can entertain from young to young at heart. If you end up leaving the film and thinking of a costume/cosplay that you would like to do then we’ve done our job.

This film was a collaboration between our production company and the vision of Drama House production along with the synergy of Platt College. We used graduate students from Platt to help with the 3D editorial process. In fact Joel Morillo became visual effects supervisor for film and Vanessa Robbins was the editor.