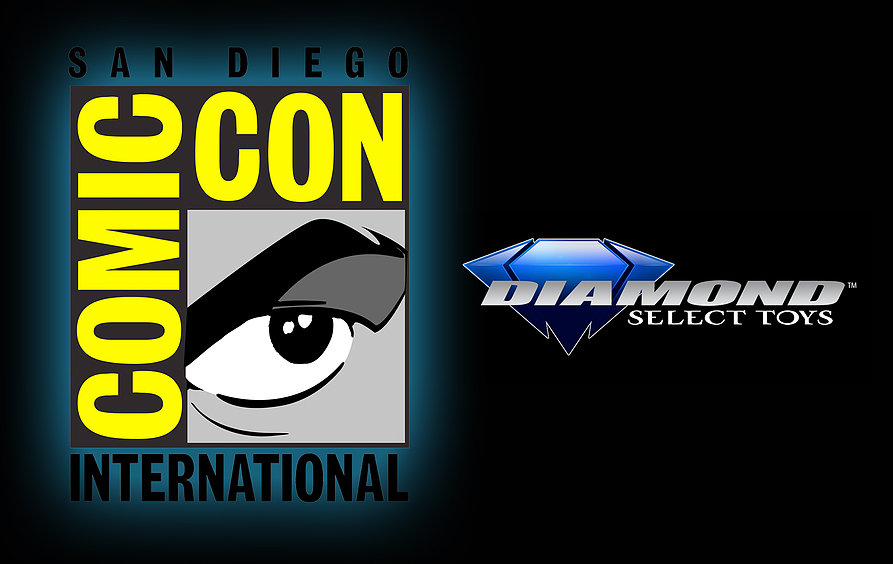 While at San Diego Comic-Con I had a chance to talk to Zach Oat of Diamond Select Toys, about their new and upcoming releases. DST has a few new items from their Back to the Future line, among them are a Back to the Future Monopoly game (has already been solicited and will be out this Fall), a Time Machine/DeLorean that comes with 3 different accessories (plutonium, tire tracks and a license plate). It is set for a Fall release. In addition they have plans for a 3 different tumblers (one for each movie) and a bottle opener.

From their Valiant Comics product lines come some new Mini-Mates which will include interchangeable heads, removable helmets, and swords. They will be solicited in the next month and released this Summer.

From the world of Kevin Smith, there are a few new releases including Mallrats Mini-Mates and action figures (will be released in 2016 at the earliest), a Kevin Smith Podcast 2-pack (coming this Summer/Fall), and Jay and Silent Bob Bobbleheads (have not been solicited yet, will be released this Fall/Winter).

From the Alien line of products, come a new bank (not solicited yet, will come out this Winter), a cookie jar (early part of 2016). There are a few other Predator products including 2 different banks (an unmasked one), coming this Fall and a masked one coming towards the end of 2015/early 2016. There is also a new Predator Mini-Mates 2-pack set coming later this year/early 2016.

Diamond Select Toys have quite a few lines from various Batman series, and they will continue to expand those. From their Batman ’66 line they have a 12″ Catwoman resin statue (not solicited yet, coming this Winter) and a Batmobile bank that will be released this Winter. From the Gotham tv show, DST will bring us Bullock, Alfred and Nygma figures. They are set for release in early 2016 to coincide with the mid-season return of the TV show. From the Mad Love comic they have a Harley Quinn figure that was just solicited and is set for a Winter release.

Earlier this year a new TV show based on a DC/Vertigo comic debuted on the CW and now we get the first figures from it. Liv Moore will get a figure that has a variant (red eyes). Both figures will come with accessories.

I ain’t afraid of no ghost, and either are DST as they are adding a Ghostbusters line.  The first series will be released late Fall 2015, with a second series coming in early 2016. Among the figures coming in either series are Slimer, Janine, Dana,Walter, Peck, a Terror Dog (with interchangeable horns) and Gozer. Terror Dog will be a stand-alone and not part of either series.

Star Trek: The Original Series are getting a retro series based for their 50th anniversary. They will include certain retro figures that sold out previously including Kirk/Klingon, and Spock/Khan 2 packs, with individual packs coming this Fall. There is also a playset coming in 2016, but that hasn’t been solicited yet. From the Star Trek: The Next Generation line there is a new release for a Deanna Troi figure, it hasn’t been solicited yet, and will come out in the early part of 2016.

Diamond Select Toys recently announced a new agreement with Marvel and we will get quite a few new lines as part of that agreement. Among the figures coming are a retro Deadpool set which will come with his classic/Mego type outfit, as well as an X-Force/Modern figure. The Deadpool has not been solicited yet, and will come out in early 2016. There is also a line of Marvel resin statues coming, as well as the Marvel Femme Fatale line. In addition Wolverine is getting a new statue. It is being solicited now, and will come out in late 2015/early 2016. There is also some Marvel model kits coming, they will include both re-releases of old sets, as well as new sets.

On the Mini-Mates side we will get series 64 of Marvel Mini-Mates (solicited soon with a release towards this end of this year), a Zombie line from Secret Wars (AoU vs Zombies) coming this Halloween, and Marvel Animated Series Mini-Mates coming this September.

Now lets talk about DST’s DC Comics/Entertainment lines. Their animated line is growing and they plan to solicit a new product from Batman: The Animated Series every month. Among the new products are busts from Bane, Joker,Scarecrow and Robin. On the Superman side their is both a Lex Luthor (has not been solicited) and a Supergirl (has been solicited) coming. There are some new vinyl banks coming, among them are Batman & Robin (not solicited yet),Batmobile (solicited this month with a release scheduled later this year), and a Green Lantern Battery (coming by the end of the year). There are quite a few bottle openers coming, and the first releases will be Flash and a Superman one, they will be solicited in the next few months, with the remainer going up for solicitation later this year.

From their Godzilla lines, there is a Godzilla Jet Jaguar bank that was just solicited and will be released this year. There is also a Mecha-Godzilla pizza cutter that hasn’t been solicited yet, it will be released in 2016. One of my personal favorite lines, is their Nightmare Before Christmas line, and they are expanding it even more. Series 1 of Mini-Mates will be coming this Halloween and will include glow-in-the-dark variants, with series 2 right behind it near Christmas 2015. They also have new dolls for both Jack & Sally, they will be in individual packs and include different facial expressions.

DST also have 3 new Mini-Mates series, Spongebob Squarepants, Muppets, and another series of the Teenage Mutant Ninja Turtles (which we covered previously). The TMNT ones are based on the Vision Quest story line, and will include new mutants. They will come out this Fall and in every case there will be one Vision Quest Splinter. The Muppets line will come out late 2015 and have different versions of Beeker and Bunsen that will be available at Toys “R” Us.

“Death of ‘Superman Lives'” Shows What Did and Didn’t Happen

An impromptu interview with Tweeterhead at SDCC 2015