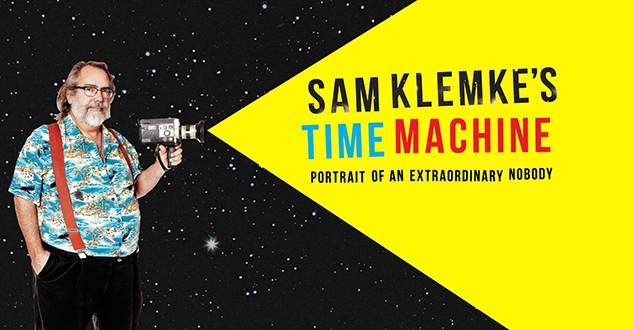 Sam Klemke initially came to people’s attention in 2011 through a YouTube video that showed 35 years of his life backwards in 6 minutes (see the video here https://www.youtube.com/watch?v=K2xTBHyfOks). The video went viral and now has over a million views. I’ve got to say I didn’t find the video all that interesting, but something about it caught the attention of Matthew Bate, writer and director of Sam Klemke’s Time Machine.

In 1977 Sam Klemke, aged 19, decided to record an annual personal status report detailing the important events in his life as well as the main international events that occurred that year. Initially Klemke used film to record his life, later moving to digital. Sam’s dreams of becoming a film maker never materialised but he has become the star of this film instead.

The personal reports are extremely honest featuring drug use, nudity, purging, discussion of his use of prostitution as well as updates on Klemke’s increasing weight and floundering work life. For many years, Klemke is essentially a slob and doesn’t mind recording it all. Although, I doubt he ever imagined it would one day be shown at Sundance and have a worldwide audience online. Whereas the YouTube video showed only a snippet of each year’s entry, the film expands on it and you get to really know Klemke.

The Voyager spacecraft was launched into space carrying the Golden Record the same year that Klemke started recording his reports. The record contains sounds and images to show what human life is like and was sent into space looking to enlighten alien life to our presence. Footage of the spacecraft’s launch, a faux documentary and an animation of its path are put into the film at various points. The parallels between the Voyager’s quest and Klemke’s recordings are clear but I would have preferred to see less Voyager. I was more interested in seeing Sam’s life unfold; the space talk/images take you away from Klemke’s story and interrupt any momentum that has built up.

It’s impressive that a very ordinary story can be so interesting. The recordings are edited together well and although I wasn’t a fan of there being so much focus on Voyager, there is a nice sequence at the end of the film that gives the footage more context and rounds it off nicely. Towards the end of film, we get to see part of the process of making the documentary. It’s good to see Klemke meeting Bate for the first time, both of them filmed it (obviously), as well as his initial uneasiness at Bate’s handling of the footage.

The entry on September 11th 2001 was particularly powerful but for the most part the entries detail normal everyday moments. Klemke had a mountain of footage that he collected over the years, not just his status reports but other footage as well. For the most part Bate selects interesting clips, which construct a narrative around Klemke’s many misfortunes.

What makes Sam Klemke’s Time Machine intriguing is the fact that very few people recorded every moment of their life back in the 1970s and 80s. It is more commonplace now of course but Klemke detailed a time that doesn’t have that much everyday footage. He went to the extreme and recorded everything but streamlined down into 90 minutes, it’s a fun watch. Sam Klemke really does make the ordinary seem extraordinary.

TVTalk with The Nerd Element Ep 104: Hanging with the Girls