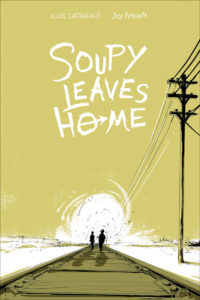 MILWAUKIE, Ore., July 11, 2016 — Dark Horse is proud to announce the launch of the original graphic novelSoupy Leaves Home, written by Eisner nominee Cecil Castellucci (The P.L.A.I.N. Janes, Janes in Love) and illustrated by Jose Pimienta (The Leg, From Scratch).

The graphic novel follows Pearl “Soupy” Plankette, a young girl who runs away from home to escape her abusive father and an unhappy future. Disguised and reborn as a boy named Soupy, she finds a kindred spirit in Remy “Ramshackle” Renault, a hobo who helps her navigate life on the rails. Together, the two try to survive life in Depression-era America by hopping trains to get to California.

Winner of the Joe Shuster Award in the Outstanding Canadian Comic Book Writer category, Cecil Castellucci has built a successful career in creating engaging content for young adults: “When you write stories, you are a bit of a time traveler. When you write for young people you are often going to a time and place with them for the first time, which is beyond exciting. I knew that during the Depression, many young people took to the rails, and train travel and hobo signs have always fascinated me. In Soupy Leaves Home, I wanted to write about a girl who feels as though her whole world is shut down, by the time she lives in, the family she has, the gender that she is, until she abandons her old self and finds a new secret world that opens up to her and shows her the way through her own depression.”

Green Arrow’s Rebirth is On Target