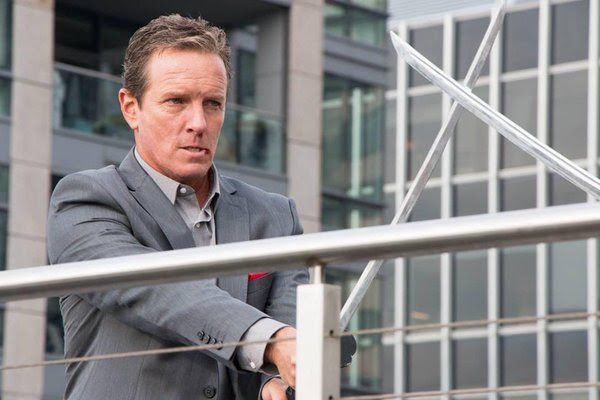 I wasn’t lying when I said that Linden Ashby was awesome to talk to.  He mentioned in the first part of our interview (found here) how some fans wished he was their dad. Well after hearing about him tearing up during the father-daughter dance at his daughter’s wedding, I have to agree with everyone else.  He also does such a good job playing a TV dad on TeenWolf come on!

In the second part of my interview, we discuss Teen Wolf and his experience on one of my fave soaps Young and the Restless. I’m wishing that I asked about Teen Wolf having a last season, I could’ve been prepared!

TNE:      Now, on to Teen Wolf just a little bit!   Why hasn’t Jeff utilized your skills on the show, like your fighting skills, because I feel like Sheriff Stilinksi just gets beat up a lot?

Linden Ashby:   I don’t know. I think that it’s not too Stilinksi maybe, but maybe we’re gonna see it at some point. I mean it’s got to be a conscious choice, on his part, to not do that.  We always talk about it, but it never – we never get it done.

TNE:      But at least you get to shoot people sometimes.

Linden Ashby:    Every now and then I shoot a few people!  I just saw a rough kind of the trailer for this season. Oh my God. It’s good! It’s gonna be a really good season!

TNE:      How many episodes have you guys filmed?

TNE:      What character are you hoping to do more scenes with this season?

Linden Ashby:   You know what? I worked a bit with Cody Christian, (Theo), and I actually had a blast working with him. I love working with Melissa [Ponzio]. I did a lot of work with Holland this year and we had a fun time.  There’s nobody I don’t like. I really love working with little Dylan [Sprayberry] and Shelly [Hennig]. You know who I’d like to do more scenes with is Ian Bohen, Peter.

TNE:     He’s still around there somewhere. I mean, really. He needs to pop up sooner rather than later!

TNE:      I thought it was adorable that you worked with – or you had a “date,” with your wife on the show. How did that come about? How did you work that in there? Did you ask Jeff, or did he just – just Jeff have this brilliant idea?

Linden Ashby:   I mean, look. Dylan [O’Brien], and Tyler [Posey],  and Holland [Roden] – Dylan and Tyler just turned 18, when we started, and so, I’ve gone from seeing them as kids to adults. They’re young men, and they’re good young men. I’ve watched them grow up, and I think I’ve kind of been a part of them growing up. It’s just a pleasure to see who they’ve become.

TNE:      That’s great! I get that everyone gets along and you see that during the panels,  especially at Comic Con.  I’ve managed to meet them a few times at San Diego, and I saw Seth and Holland at Motor City this year, so yeah. They’re great!

Linden Ashby:  I remember talking to those guys [Tyler and Dylan at the beginning of the show] and watching what they were doing. I said to them, “You two are the host of this party. You set the tone. Whether you know it, or not, you set the entire tone for this set, and you’re doing such a great job.” It’s a family. It is. I mean that’s such a cliché, but Teen Wolf is a family, and it’s a pretty glorious place to work, which is great, because I’ve been on sets that were not, and it ain’t fun.

TNE:      Awww, how was your experience on Young and the Restless?

Linden Ashby:   I did Young and the Restless because Susan was on that show.

TNE:      I think you were sharing a story line with Nickie. You were like obsessed with her.

Linden Ashby:   No. It was Sharon.

TNE:      Oh, Sharon! It was either Nicky or Sharon. It was one of those – the blondes. One of the blondes!

Linden Ashby:   And all it was is that I’d just come back from some movie in South Africa and Susan said,

So we did, and it was really fun, but it was kind of a larc. I had a blast!  I loved Sharon Case (Sharon).  If you’re an actor and you’ve never done it [work on soaps], you got to do it, because it is so scary.   I mean they shoot a whole show in a day, and it’s like; buddy, you hit the ground running! You better know your stuff, and you better be ready to go. You get one, maybe two takes, and you’re doing the whole scene. They’re not just doing  your coverage, and then their coverage. It’s like you’re doing it all at once, and shazam!

TNE:      Yeah. Just from watching soaps, I figured that would be a really intensive schedule. I think of how some actors started in soaps, and maybe getting that kind of organizational skills, and  that time management to be able to be more flexible when they work on TV shows that work on a longer schedule, as far as episodes, and also even movies.

Linden Ashby:   It used to be that everybody started in soaps.  Now, it’s just really kind of where you came out of, and now,  soaps are sort of gone away, which is too bad.  There are like four left.

Linden Ashby:   No. I looked and I saw what people [did]. It’s like you watch people do the little tricks and stuff.  Like on a soap, they’ve got these crazy red lights on top of the camera. It comes on and tells you when the cameras pointing at you and it’s like, “hey man. Can you turn those things off? I want to think about it. You know let’s try and make this as real as possible between the two of us. They can edit that later.” You watch actors; they wait for the red light before they start acting, and I’m like, okay. Well, maybe you’re way better than I am, or maybe this is just some kind of bullsh**. (Both of us laugh)

That was one of the bad work habits, but that’s just me. Other people, they loooved it. They actually want to see the monitor while they’re working. I’m like turn that f**ing thing around. I don’t want to see any of that.  I want to pretend like I am this person and we are in this situation.  But that’s just me.

TNE:      Have you thought about working behind the scenes? Maybe as a producer, or even as a director, eventually?

Linden Ashby:   Yeah. I mean I’ve produced and directed a little bit. I like directing. I enjoy it, and I enjoy producing. I like the process of putting things together. It’s very creative. I mean it’s – you’re putting a project together. You’re building the pieces, but I think that like anything, I think that if you do it – you know if you dabble at it, you’re not gonna be any good. You know it’s a full time job and I’m not ready to commit full time to something like that yet.

TNE:      As far as your fan base, do most people recognize you for Teen Wolf or Mortal Combat, or a little bit of both? Does it matter what age the fans are, too, as far as what they first recognize you from?

Linden Ashby:   It does. It’s like there’s a whole multi generation curve for Mortal Combat. And then, there’s a huge generation for Teen Wolf. Then, there’s Melrose Place, and I’ve done probably 30 Lifetime movies.

Linden Ashby:   There’s a whole different demographic for that. Yeah. I think I’ve gotten to the point in my career where, you know, you walk through the airport and you just see people just looking like, ‘holy crap. I know that guy.’ They’re pretty nice about it, which is good. I’ve gotten sort of the level of recognizability that it’s not a bad thing, and it’s not an intrusive thing. People are pretty gracious and respectful.

TNE:      Alright. Are your daughters – do they watch Teen Wolf?

Linden Ashby:   Yeah. I think so. I hope so. They better!

Linden Ashby:   No. They’re older, but it’s funny. Their friends do!  Grace, our oldest daughter, just got married two weeks ago, which is pretty cool.  Very cool. There’s nothing pretty cool about it. It was very cool. It was amazing, and then, Savannah is studying to study law in New York.

TNE:      Maybe New York Comic Con. (has brief fantasy of meeting him in person finally this year at NYCC)

Linden Ashby:   Oh, trust me. Trust me. Wherever the girls want to go. You know, we just don’t know right now where they’re gonna end up, and once grandbabies start coming, we’ll be living very close to those grandchildren. I can guarantee that.

TNE:      Awww. That’s so adorable! How did it feel walking your daughter down the aisle? Did you – you did that, right? Of course you did.

Linden Ashby:   Yes, I did. That was a moment where I was totally there for her.  It was pretty wonderful! I felt like I was there to support her, and it was kind of my moment, but then, the father daughter dance.

Linden Ashby:   Yeah. I leaked. I got pretty leaky on that one! I was okay walking her down the aisle. The father daughter dance, I was like, you know, it was bad.

TNE:      Wait, wait, wait. Did you interrogate your son-in-law, because you’re Johnny Cage?

Linden Ashby:   Boy, that was funny. All his friends – you know that was the demographic that they were Mortal Combat fans. They were like, “oh great! You’re marrying Johnny Cage’s daughter. Good for you! Lucky you!” He’s such a good guy. He’s such a good, good guy. Such a smart guy and couldn’t pick a better son-in-law.

TNE:      Yeah. It’s just funny, because you’ve been in an iconic role and  you’re a badass, as far as fighting, so you could kick someone’s butt if necessary.

(I invited him to guest on our podcast TVTalk with The Nerd Element to talk about Teen Wolf when it comes back on and here’s his response:)

Linden Ashby:   Okay. Yeah. Once the show starts back up, I’d love to do it.

TNE:      Cool! Now, granted, we don’t like an episode, we’re kind of honest about it. I’m just letting you know right now.

Linden Ashby:   That’s the way to be.

Linden Ashby:   (Coyly) I wouldn’t worry about it that much.

Linden Ashby:   It will. Don’t worry!

Linden Ashby:   You are very welcome.

I’m glad I got to talk to Johnny Cage. I’m just – I’m really happy right now, because I’m an 80s baby.  I feel like I’ve just checked off something that I didn’t even realize I wanted on my bucket list! To tie us over, here is the trailer for the *sniff* final season of Teen Wolf!

TVTalk with The Nerd Element Ep 131: SDCC Run Thru