Storm King Productions announced today that their new title John Carpenter’s Tales for a HalloweeNight Volume 2 will be available at NYCC 2016. More information and pictures courtesy of their press release below. 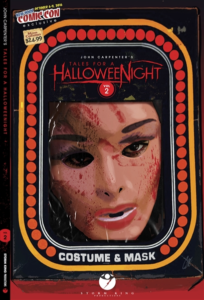 (Hollywood, CA- September 28, 2016) Award winning publisher Storm King Productions announced today that although their new title John Carpenter’s Tales for a HalloweeNight Volume 2 will not hit stores until after the show that fans can get their New York Comic Con Exclusive Edition of the title at the show AND get it signed by an epic line up. This anthology includes works from all of the following artists and writers who WILL all be signing at the Storm King booth # 2304: Tim Bradstreet (Punisher), Cat Staggs (Wonder Woman ‘77), Jimmy Palmiotti (Harlequin), Steve Hoevke (Thor), Janice Chiang (Impulse), Dennis Calero (Xmen Noir), Deidre Brooks (Warcraft), Amanda Deibert (Wonder Woman’ 77), and Richard R. Clark (Batman: Arkham Unhinged). A limited quantity of the title will be signed by John Carpenter himself! Stop by the booth to check out the signing schedule. Fans not interested in signings should hit the Storm King booth for Con exclusive buttons, discounted product bundles, and a Sunday raffle for a TV at 2pm. You must be present to win!

John Carpenter’s Tales for a HalloweeNight Volume 2:
From John Carpenter, the man who brought you the cult classic horror film Halloween and all of the scares beyond comes 12 more twisted tales of terror, tricks, and treats. In volume 2 of the award-winning graphic novel series, Carpenter brings together another stellar ensemble of storytellers from the worlds of movies, novels and comics for a collection of stories that will haunt your dreams at night.

Unable to make it to New York Comic Con? No comic shops or shows near you? Visit http://www.stormkingproductionsstore.com/ for the finest in Storm King productions products!
Want the most up to date information on John Carpenter’s Asylum?
Like us on Facebook at https://www.facebook.com/JohnCarpentersAsylum
Follow us on Twitter at https://twitter.com/JCsAsylum