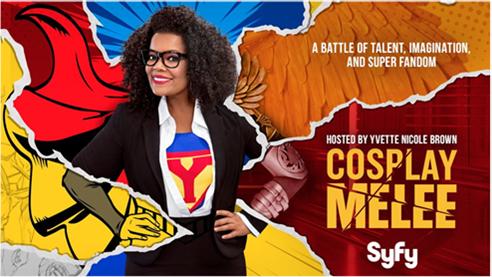 With WonderCon just one day away, Syfy announced that they will sponsoring the Masquerade at WonderCon, as well hosting an emergency services booth for cosplayers there. More information and pictures below courtesy of their press release.

SYFY’S ‘COSPLAY MELEE’ TO HOST COSPLAY EMERGENCY SERVICES BOOTH
AND SPONSOR THE MASQUERADE AT WONDERCON ANAHEIM 2017
Syfy’s newest competition show, COSPLAY MELEE, will host a Cosplay Emergency Services booth in the exhibit hall at WonderCon Anaheim 2017. There, cosplay experts and ambassadors will be on hand to offer quick-fix materials for all cosplayers at the con as well as an opportunity for guests to make their own mask.
Cosplay Emergency Services Booth (137) hours are below:
Friday, March 31 (11:30am-7pm)
Saturday, April 1 (9:30am-7pm)
Sunday, April 2 (9:30am-5pm)
Also, on Saturday, April 1 at 8:30 pm, COSPLAY MELEE will be the presenting sponsor of the 13th annual WonderCon Masquerade held in the Anaheim Convention Center Arena. At the event, cosplayers compete in the onstage event, which is also broadcast on the big screen in the arena. Trophies and prizes will be awarded to the best costumes in show.
Syfy’s new transformation competition series, COSPLAY MELEE, is an epic showdown of creativity, eye popping costumes and one of a kind characters. The hour-long battle is hosted by actress and self-described “super fan girl” Yvette Nicole Brown (“The New Edition Story,” “Community”) and executive produced by Jay Peterson and Todd Lubin of Matador Content (“Lip Sync Battle”). Each week, four world class cosplayers compete to create not only intricate full-body costumes  but fully formed characters that they must bring to life through their own realistic performance. Guiding and critiquing them are a panel of judges including world class cosplayer LeeAnna Vamp and A-list costume creator Christian Beckman (“The Hunger Games,” “TRON: Legacy”). At the end of every episode, the winner will walk away with $10,000  and the right to claim cosplay supremacy.
From Matador Content (“Lip Sync Battle”), COSPLAY MELEE airs Tuesdays at 10/9c on Syfy.
Tweet using #CosplayMelee, and follow the series @CosplayMelee.
previous post