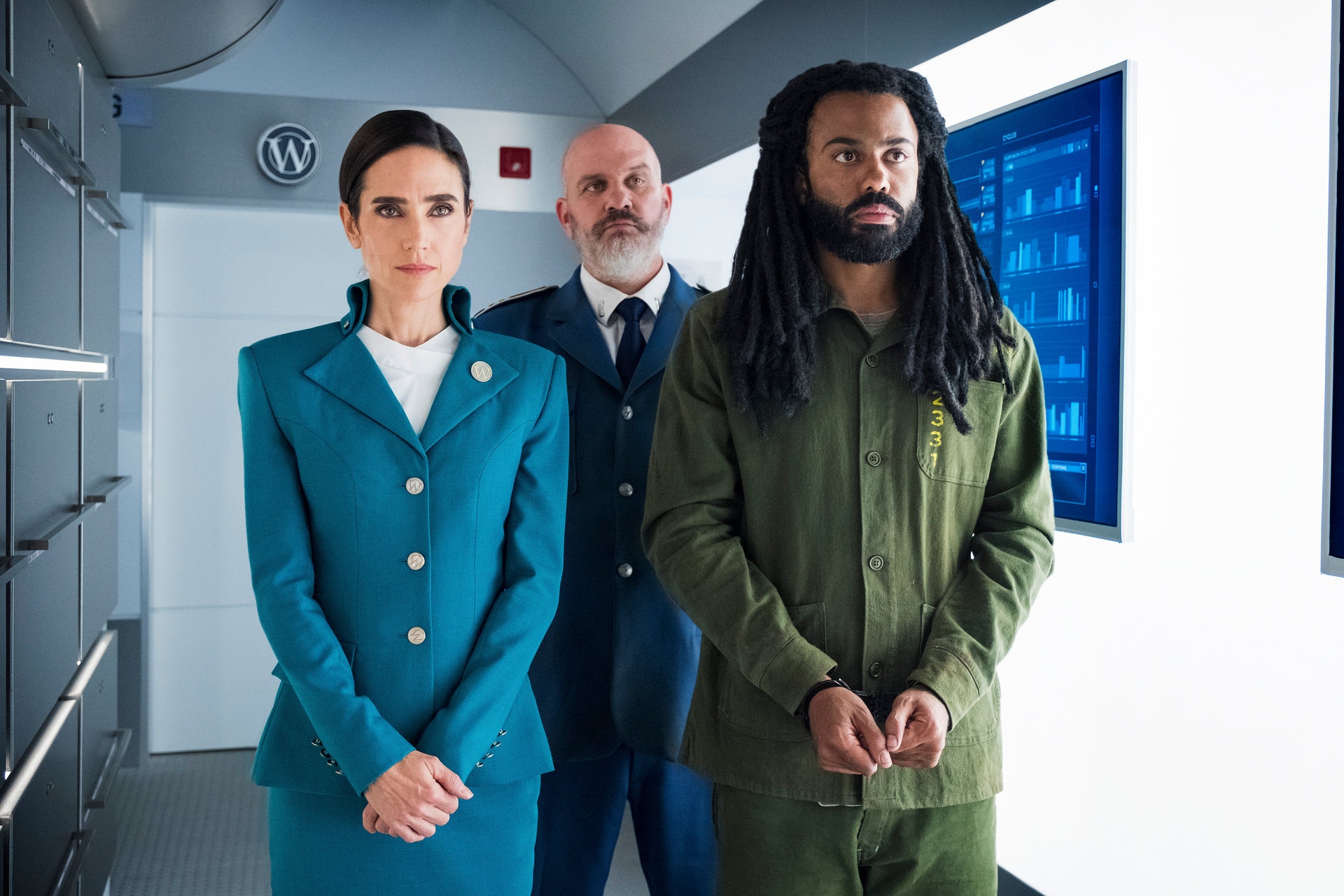 Note: The review below is based on viewing the entire series and contains mild broad spoilers for the first few episodes.

After spending a few years in development hell, the eagerly awaited Snowpiercer finally debuts on TNT on May 17, 2020. Boasting a stellar cast, including Academy Award-winning actress Jennifer Connelly (A Beautiful Mind) and Grammy and Tony Award-winning actor Daveed Diggs (Hamilton), the show is often a rollicking romp through cultural and class divides, tackling morality as well. The morality, however, is a bit muddled and the tone of the series inconsistent.

Based on Academy Award-winning director Bong Joon-ho’s 2013 film of the same name—which in turn was based on the 1982 French graphic novel, Le Transperceneige, by Jacques Lob, Benjamin Legrand, and Jean-Marc Rochette—the TV version “reboots” the continuity of the film, taking place much earlier in the eponymous train’s journey than the events of the movie version (see the official timeline here.

As in the film, the series opens in an ice age apocalypse as Snowpiercer, a train we’re repeatedly reminded is 1,001 cars long, is ready to leave on its journey perpetually circumnavigating the globe with its passengers who will soon be the last living people on earth. All paid passengers are aboard, but the train is besieged by a desperate mob, some of whom force their way onto the train and are subsequently forced to live in the tail section because they are effectively stowaways. These people become known as “Tailies.”

Snowpiercer is divided by class; the closer to the engine, the better the accommodations and treatment. First is the most opulent (rich), followed by Second (middle class, including the train’s doctors), Third (the working class), and the Tailies (the poor). In between the Tailies and the other classes are cars with ocean fish, various agriculture and farming cars, and even an entertainment venue called the Night Car. The train’s staff is also divided by class; Hospitality is in charge, while the Brakemen provide upper-level security/policing and the Jackboots provide the army. Tailies are put to work by force; they are dragged and decontaminated for jobs in Sanitation and other “menial” tasks. They live in poor conditions and they get to clean up the waste of the upper classes.

It’s no wonder they want to rebel. Led by Andre Layton (Diggs) and Pike (The Walking Dead’s Steven Ogg), the Tailies prepare to fight their way to the Engine Eternal and take over the train. With nearly 1,000 cars between them and their freedom, it’s a very daunting task.

Connelly plays Melanie Cavill, the head of Hospitality who is known as “the voice of the train.” Melanie makes all the announcements each morning, makes sure the upper-class passengers are happy, and literally makes sure the train runs.

When a mutilated body is discovered, Melanie pulls Layton (Diggs), the only homicide detective on the train, from the tail section to help solve the crime. What starts as a murder mystery soon turns into an examination of class, culture, power, religion, survival, and morality as Layton moves about the cars and learns that the levels of corruption and disruption go deeper than he previously believed.

While the initial mystery is solved rather quickly, the other layers Layton uncovers propel the story forward and keep the series from becoming stuck in a formula (a mundane murder mystery would have been a total waste of the futuristic trappings). The closer Layton gets to the truth about Snowpiercer, the more danger he creates for himself and everyone he loves.

It’s a lot of thematic material to cram into one show, and when the moral calculus of the characters’ motivations gets messy, the message gets a little muddled. The tone of the show is not wholly consistent, either. Characters sometimes do or say things that seem more plot-driven than anything we’ve seen from them, making their morality less a personality flaw or virtue and more a moment for whichever writer provided the script to make a point.

However, whether by design or happenstance, there are plenty of moments reminiscent of our current circumstances that make the show worth a watch. For instance, the super-rich Folgers exemplify the pitfalls of capitulating to an oligarchy, while the Jackboots are aptly named. Cultural divides are embodied in small details, such as the American passengers tiring of being “body-shamed” by the Swedish passengers because they won’t go into the sauna nude. Trappings of religion abound as well—referring to the front as The Engine Eternal, the worship of the mysterious Mr. Wilford—and are also reminiscent of what’s happening in the U.S. today.

Even the characters’ reaction to disease—everyone putting on masks and immediately disinfecting surfaces—seems heightened because of the coronavirus pandemic. Even if in-world, it makes perfect sense: Snowpiercer is a closed ecosystem and one errant sneeze could conceivably wipe out what’s left of humanity. That people are chipped by which class they belong in (chips allowing access to the right cars) also seems less fantastical now than when the trope first appeared in science fiction.

In addition to the stars of the show, the new iteration has quite a pedigree behind the scenes; along with Bong, other executive producers include Park Chan-wook (2016’s The Handmaiden), Scott Derrickson (2012’s Sinister and 2016’s Doctor Strange), and Graeme Manson (writer on Orphan Black), who also has creator and writer’s credits on the show. Directors of the episodes include James Hawes (Black Mirror) and Frederick E.O. Toye (who directed the “See How They Fly” episode of HBO’s Watchmen mini-series). Legrand, Lob, and Rochette are credited writers, along with Manson, on the pilot episode.

Music is provided by the prolific Bear McCreary; his theme song alone is worth tuning in for. The special effects are okay as far as television goes, but the sets are great and abound with little details to immerse you in the train’s world. The music by Bear McCreary is also excellent. One other nice touch for continuity is having almost every episode starting with one of the characters narrating part of what happened in their lives before the climate calamity, giving some insight into life on the train for the different classes and setting up the theme for that episode.

While Snowpiercer isn’t ground-breaking, it does have fun with its premise and attempts to probe deep into the human psyche to drive its drama. It doesn’t necessarily succeed in everything it tries to do, but it does have a catchy premise and an already-announced second season going for it, as well as some good, gory battles. If its morality was only a bit clearer, it would be a straight-up thrill ride. It’s still a fun trip, though.

For more on Snowpiercer (the TV show), see: https://www.tntdrama.com/snowpiercer