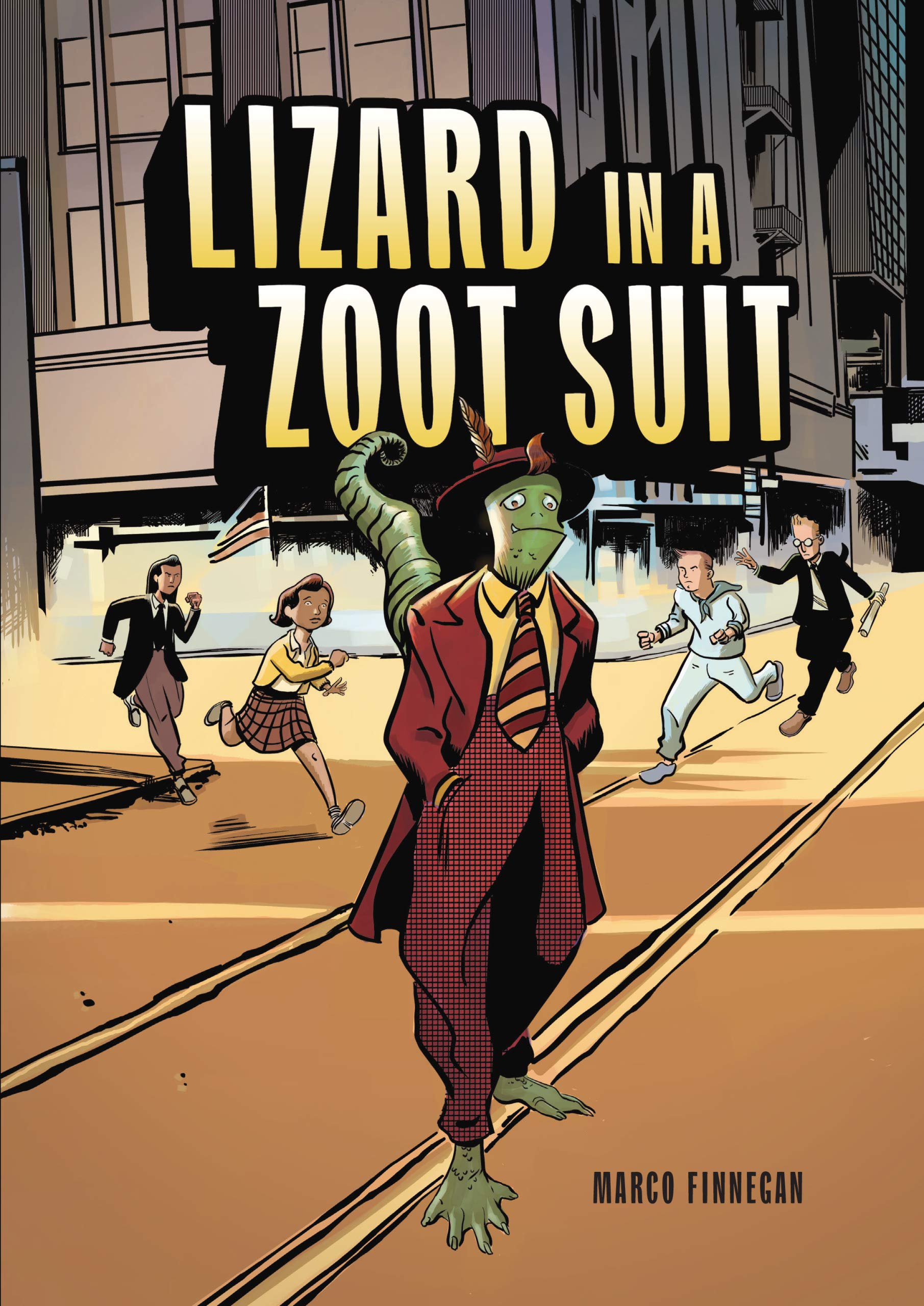 (July 30, 2020) Across America, there’s widespread unrest and growing racial tensions. On the morning of August 2, 1942, the body of José Gallardo Díaz is discovered unconscious and dying on a road near a swimming hole in Commerce, CA. Diaz dies in Los Angeles County General Hospital, without making a statement or even regaining consciousness. Despite the fact that the cause of his death is never determined and there’s insufficient evidence, 17 Mexican-American youths are arrested. On January 13, 1943, twelve of the defendants in what the tabloids called the “Sleepy Lagoon murder” are convicted of second-degree murder. They are sentenced to serve time in San Quentin Prison.

The Sleepy Lagoon murder provides the backdrop for Latinx Cartoonist Marco Finnegan’s dynamic new YA graphic novel Lizard in a Zoot Suit, his first full length work as a writer/artist, in which history, race, class, and science fiction collide in unexpected ways. The all new, original graphic novel is set in LA’s Chavez Ravine neighborhood, two decades before the neighborhood was torn down to make way for Dodger Stadium. In June, 1943, long simmering tensions between the Chicano community and white servicemen led to the Zoot Suit Riots, fueled by months of fear and tension following the Sleepy Lagoon murder trial.

“A YA book shouldn’t pander to its audience,” says Finnegan. “I use authentic language and scenarios to keep one foot grounded in the reality of the riots. I started writing Lizard in a Zoot Suit after rewatching Luis Valdez’s Zoot Suit play and the film of LA Confidential. I realized that the Zoot Suit itself is such a huge part of pop culture, but little is said about who the Zoot Suiters were and, besides the play, there weren’t any other stories about these kids and their lives. I decided that I didn’t want to do a nonfiction book that would read like a history book. I love genre pieces, so I decided to add some sci-fi to the mix and the story came together.”

In Lizard in a Zoot Suit, twin sisters Flaca and Cuata have a problem. It’s bigger than being grounded by their strict mother. It’s bigger than tensions with the soldiers stationed nearby. And it’s shaped like a five-foot-tall lizard. When this lost member of an unknown underground species needs help, the sisters must scramble to keep their new friend away from a corrupt military scientist―but they’ll do it in style.

Ahead of publication, Lizard in a Zoot Suit is already receiving rave reviews:

“An entertaining and meaningful story. The bicultural characters and diverse Mexican-American setting are a fun entry point into some serious Chicano history, the era of the 1940s Zoot Suit Riots. Put on your tacuche and your tando, and get ready for Lizard in a Zoot Suit!”

“With a dash of mid-20th–century pulp monsters and a backdrop of 1940s Los Angeles, Finnegan mingles humanoid swamp creatures with victory rolls and zoot suits to highlight Mexican American families struggling to hold their own…. Period pop horror that will lure readers in for important history lessons.“—Kirkus Reviews

“Wacky, out-of-this-world and pure enjoyment. Finnegan pulls out all the stops and crafts a unique adventure that feels fresh and vibrant.”—Alex Segura, acclaimed comic book writer of THE BLACK GHOST, THE ARCHIES and more

“A unique and effective lens through which fans of historical fiction can view the treatment of the ‘other’ and race issues of the 1940s.”—School Library Journal

“Lizard In Zoot Suit carries an important message at its core. Finnegan has given us a book that sheds light on darker corners of history, while telling a story of mysterious visitors from beneath the earth.”—Samuel Sattin, author of GLINT and BEZKAMP and more

Born in El Paso, Texas, Marco Finnegan and his mother moved to Southern California in the early 1980’s. Today, he, his wife, and their four children live in Temecula, CA. Finnegan’s story is inspired, in large part, by his desire to tell a YA story that represents his and his family’s lives, in the ways that the blockbuster stories of his youth did not. “What drives me as a storyteller is imagining a future, where Latinx kids see their lives represented in comics, films, and TV shows.”

With striking two-color artwork and snappy dialogue,Marco Finnegan’s full length graphic novel debutre-imagines a notorious event in LA’s history to deliver a timely story about race and social unrest. Lizard in a Zoot Suit combines the sci-fi-fueled social relevance of The Shape of Water with the charm of Raina Telemanger’s Sisters to create a one-of-a-kind reading experience.

Lizard in a Zoot Suit will be published August 4, 2020 by Graphic Universe™, an imprint of Lerner Publishing.

Black Panther: A Nation Under Our Feet – Part Four