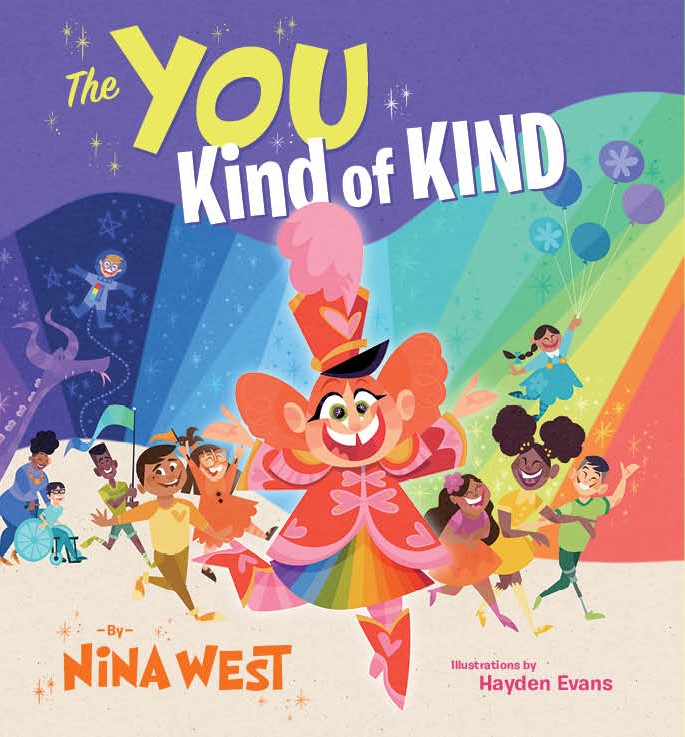 Drag Icon Nina West, best known as Miss Congeniality from Season 11 of RuPaul’s Drag Race, is bringing her brand of kindness to San Diego Comic Con with a very special, first of its kind panel previewing her first ever children’s book “THE YOU KIND OF KIND”. Nina will be one of the first ever drag queens to host a panel at SDCC about their own project. The panel will take place on Friday July 22nd from 5pm to 6pm in ROOM 23ABC and will be moderated by Ashley Eckstein (Voice of Ahsoka Tano in Star Wars and Her Universe Founder) It will also feature illustrator of The You Kind of Kind Hayden Evans as they discuss how the book came about and the importance of LGBTQIA+ authors and representation in mainstream media especially in this volatile climate. Attendees to the panel will receive a special one of a kind signed Item only available at the panel.

In addition, Nina will be signing limited edition posters and taking photos with fans at the Her Universe Booth (Booth #1317) on Saturday July 23rd from 1pm to 3pm. “I am so excited to make my San Diego Comic Con debut to talk about my new book The You Kind Of Kind!” said Nina West. “SDCC is a place where thousands of like-minded people come together to celebrate their fandoms, and, as a member of this community, I am thrilled to share my new project with this incredible community of fans! And it doesn’t get any better, because I get to share in this experience with my friend Ashley Eckstein, and the illustrator of THE YOU KIND OF KIND, Hayden Evans! I can’t wait to meet you all and share the kindness and love!”

THE YOU KIND OF KIND releases from PA Press on October 25th. For pre-orders visit www.ninawest.com .

FRIDAY FROM 5PM TO 6PM – Join Moderator Ashley Eckstein (Ashoka Tano in Star Wars Clone Wars, Founder Her Universe) as she talks to Nina West (RuPaul’s Drag Race, Hairspray National Tour) about her first ever children’s book The You Kind Of Kind out October 25th from PA Press. Hear about how this book came about and the importance of LGBTQ authors and representation in mainstream media. Features a Q and A and one of a kind SDCC Exclusive Giveaway. Room: 23ABC

Nina West is an American drag queen, actor, singer, songwriter, and LGBTQ+ activist played by Andrew Levitt. She was named the “Most Googled Drag Queen in The World” from 2020-2021 with over 7.8 billion unique searches. She rose to national prominence in 2019 with her appearance on VH1’s Emmy-winning show RuPaul’s Drag Race Season 11, where she placed sixth and won Miss Congeniality. In 2021, she returned to the show as a guest and was anointed “America’s Sweetheart” by RuPaul herself.

On June 17th, 2020, Nina released a charity partnership with country music legend, Dolly Parton – The “Dolly X Nina: Kindness is Queen ” Collection – with all proceeds going to the Dolly Parton Imagination Library and The Nina West Foundation to benefit LGBTQ+ youth and literacy. It sold out in hours. She has also fronted major advertising campaigns for multinational companies Pepsi, Pantene, Lane Bryant, BOMBAS, Bubly, and Procter and Gamble.

In 2021, she partnered with Nickelodeon and Blue’s Clues for a series of Pride videos that went viral with over 2 million views. Nina hosted the first-ever DISNEY PLUS “This Is Me: PRIDE Celebration Spectacular,” a celebration of the LGBTQ community with Disney classics reinterpreted by LGBTQ artists like Hayley Kiyoko, Todrick Hall, and Alex Newell. She returned to the show in 2022 and performed with Disney Legend Alan Menken in a tribute to Disney Legend Howard Ashman.

Nina is currently headlining the brand-new national tour of the Broadway Musical HAIRSPRAY from original Producer Jerry Mitchell in the lead role of Edna Turnblad, for which she has received rave reviews.