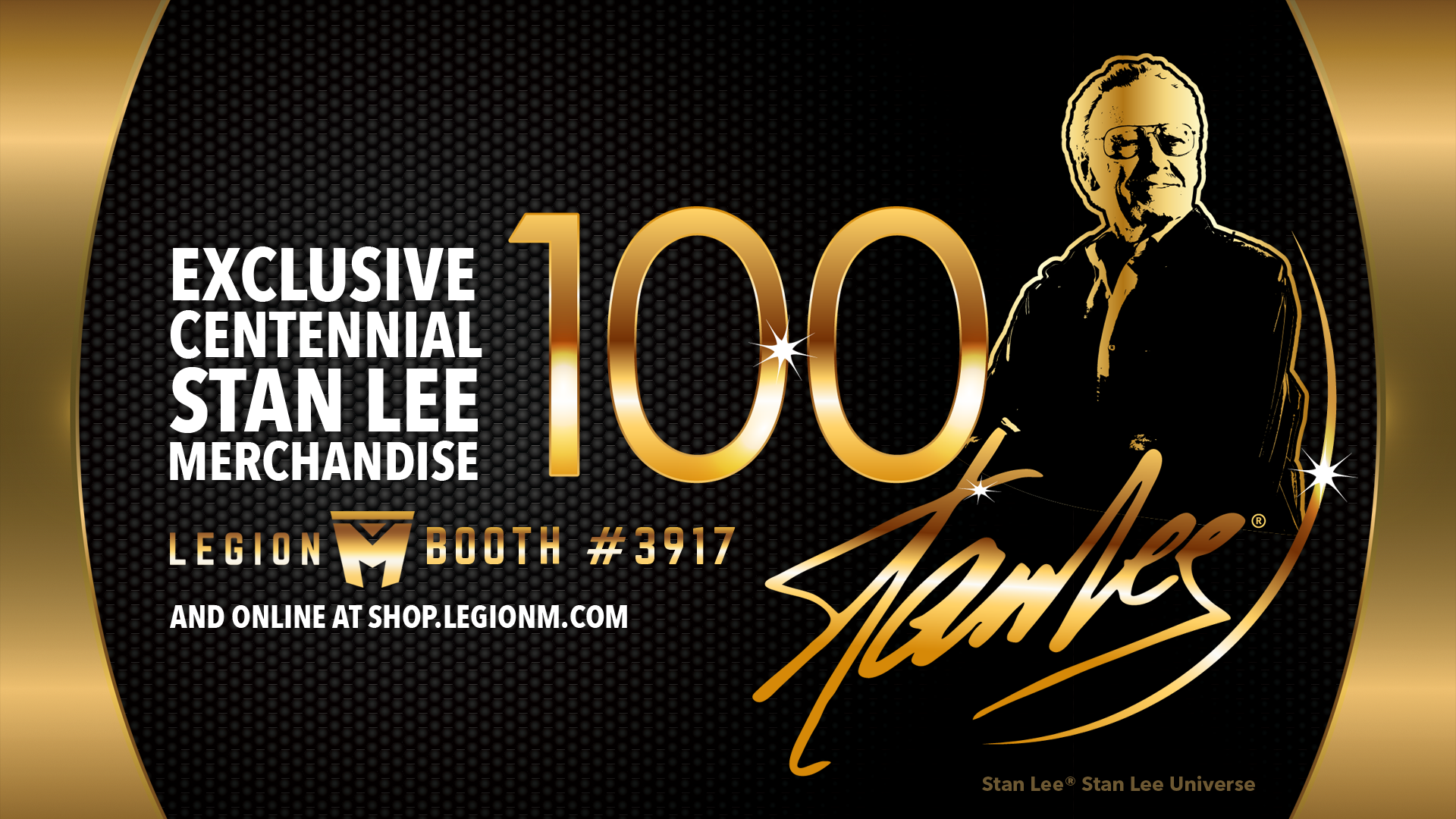 In honor of the writer’s 100th birthday, Legion M will debut
exclusive apparel as part of “The Centennial Collection”

Coined as the “Godfather of Marvel Comics,” Lee was a trailblazer in the comic book universe, penning the iconic stories of Spider-Man, the X-Men, Iron Man, Thor, the Hulk, Ant-Man, the Wasp, the Fantastic Four, Black Panther, Daredevil, Doctor Strange, the Scarlet Witch, and Black Widow. Lee created a fantastical world that drew in millions of fans, and over the years has grown to be one of the largest fandoms in history.

“As a company that values the power of fandom, we at Legion M would like to honor and celebrate the amazing contributions Stan Lee made to his fans by launching The Centennial Collection,” said Mandy Bardisbanian, VP of Licensing & Merchandising.

Lloyd Mintz, SVP, Global Consumer Products at Genius Brands International, the company that controls the rights to the Stan Lee Universe in a joint venture with POW! Entertainment, stated: “We are excited to partner with Legion M to bring this exclusive collection of limited edition Stan Lee merchandise to the iconic creator’s legions of fans at Comic-Con this year. This is just one of many initiatives that Genius Brands has in development this year to commemorate what would have been Stan’s 100th birthday celebration this year!”

The Centennial Collection will feature an array of t-shirts, all paying homage to the late writer, Stan Lee. Each day of San Diego Comic-Con, an exclusive t-shirt will be available for that day only, while supplies last. All merchandise will be available for purchase at Booth #3917 and on LegionM.com.

Legion M is the first entertainment company designed to be OWNED BY FANS. With a rapidly growing community of over 150,000 people (including over 35,000 investors who own a stake in the company), Legion M has raised over $16,000,000 to help finance, produce, develop, release, and monetize film and TV projects including upcoming feature films The Man In The White Van (Sean Astin, Ali Larter, Brec Bassinger, Madison Wolfe), Nandor Fodor and the Talking Mongoose (Simon Pegg, Minnie Driver), and Mary’s Monster (directed by Farren Blackburn and produced by Fulwell 73 and Rose Ganguzza).  Working with partners that include NEON, Searchlight, Bleecker Street, SpectreVision, Saban, RLJ, and Screen Media, Legion M has been involved with many notable releases including Colossal (Anne Hathaway, Jason Sudeikis), Mandy (Nicolas Cage, Andrea Rosborough), and the Jay and Silent Bob Reboot (Kevin Smith).

Led by two Emmy award-winning serial entrepreneurs, Legion M is backed by an advisory board of Hollywood heavyweights including William Shatner, Dean Devlin, Bill Duke, Leonard Maltin, Eric Ries and senior executives from the studios and streamers. To learn more about investing in Legion M and/or to become a member of the Legion for free, visit www.legionm.com.

Leading Authors of Sci-Fi, Fantasy, and Horror at SDCC

SDCC: COLLIDER’S PERRI NEMIROFF TO HOST FROM PAGE TO SCREEN