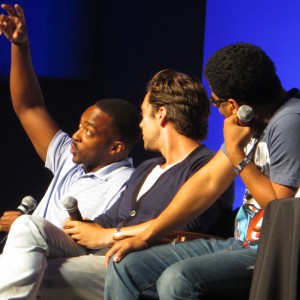 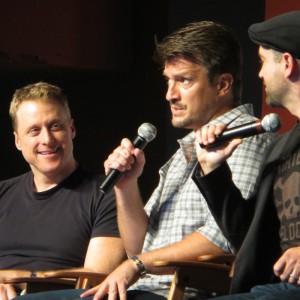 If you are wondering why the Doctor Who panel is not in this article it is because the two panels below featured sexy male co-stars trying to out funny each other. I cracked up at both of these panels and was trying to decide which one was the funniest!   First up the Captain America Winter Soldier panel featuring Sebastian Stan aka Bucky Barnes and Anthony Mackie, aka Sam Wilson, the Falcon.  Anthony Mackie told an interesting story involving lube for Stan to get into his “Winter Soldier” costume. Both wouldn’t mind a Black Widow storyline.  They even fist bumped to that! Both wouldn’t mind hosting Saturday Night Live.  I would definitely watch if that happened.  Stan and Mackie seem to get along really well with each other considering they didn’t really see each other on set but met at the London Premiere of the movie.  Mackie even joked to Stan “I told you,” referring to when a fan called them both handsome.

Next up is the Nathan Fillion and Alan Tudyk panel. Both Nathan and Alan gave away something to the fans that asked questions. Alan even gave away a gift he originally received!  From reminiscing about how Alan couldn’t remember his lines to Nathan describing audiences reactions when they first saw the movie Serenity and *spoiler* Wash died, was priceless.  Just their chemistry with each other is always a wonder to see.  Nathan’s story of how he practically stalked the show Community’s set until he guested on the show was hilarious as well. A good question was what rules they would give to a Firefly/Serenity  drinking game. According to Nathan, if someone really wanted to get drunk take a drink every time Wash pressed the buttons above his pilot chair, “click, click. click.”  There was even a crasher at the panel! I thoroughly enjoyed the Q&A.

If I had to choose, the funniest panel between the two would be Nathan and Alan’s just because they had way more funny stories. Stan and Mackie also had some but I feel like they will have more as the years go by.

Let us know what you thought of each panel below! Which did you think was more funny?