Arizona debuted a new convention today! Arizona iCON has been brought together by two local toy collectors and dealers that have a combined 50 years of involvement in the Arizona community.

The event brought together a slew of local vendors and exhibitors eager to share their collections with the con’s patrons.

The event took place at the Glendale Civic Center from 10am to 8pm.

The three special guests of the evening included: Mark Ellis,  “Director of Marketing for Male Action Toys, Games, and Novelties” for Mattel in the early 1980s, who, along with his team, created He-Man and Masters of the Universe; Jeff Meyers: who holds a patent for Remote Controlled (R/C) toys and transforming R/C vehicles and worked with Hasbro for a number of years and who’s work can be seen in the Transformer Movie lines as well as Jurassic Park 2 &3; and Frank Coroneos:  a designer for the Hasbro Toy Division in the mid to late eighties, until the early 90s and worked on GI Joe: The Real American Hero.

The con had a few panels throughout the day and many activites to keep visitors engaged. One of my personal favorites was the G.I. Joe vs. Transformers Rap Battle that took place in the main lobby. Led by Vocab Malone and DJ EyeQue, the event was amazing. The crowd definitely enjoyed it.

On hand was Arizona Avengers, the cosplay for charity group based out of Arizona. The crew took in the con and posed for photos with the young and veteran fans in the crowd. It was such a blast seeing them interact with the children in attendance and just have fun doing something they love.

Admission this year was $10. Children under the age of 12 were free with a paying adult admission. The price was well worth the treasures behind those doors.

This years vendors included the following: 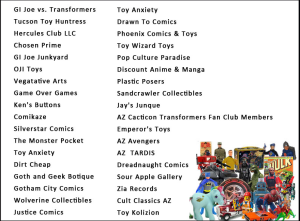 There was a little bit of everything from everyone. From opened package action figures, mint condition figures, retro toys, and even the hard to find, you were sure to find something to interest you.

Although I came to the event as an observer, I myself managed to walk out the door with quite a few goodies myself!

I’d say this is definitely a con worth checking out next year if you’re a collector or just enjoy having a new trinket!

Be sure to check out all the action at the Arizona ICON facebook page as well as on Twitter #azicon!