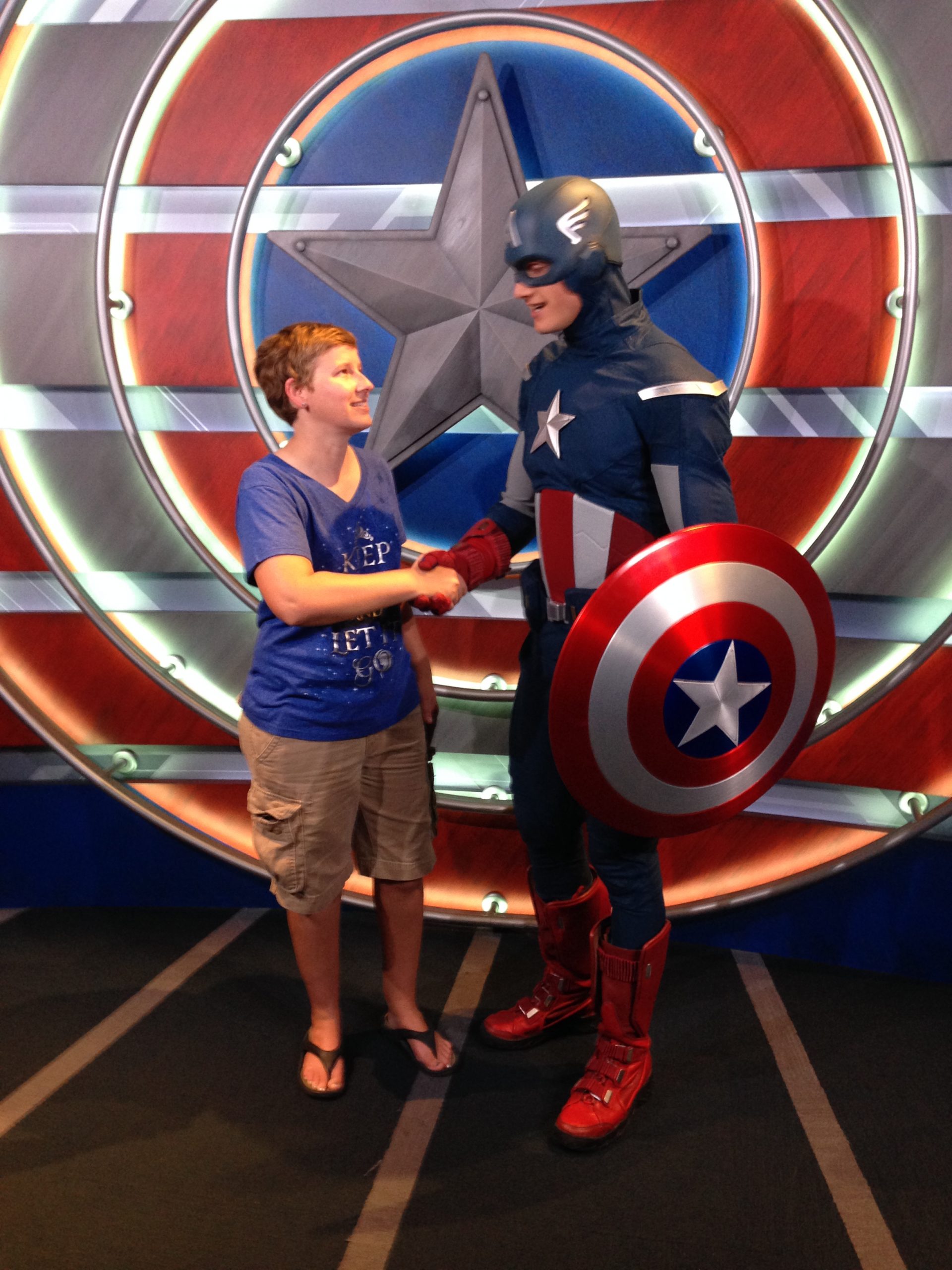 I never pegged myself for the type of fangirl that moons over cosplay. Yes I think it’s completely amazing and creative but I don’t usually freak out over the Stormtroopers, anime characters, or other costumes I see, that is, until now.

I had the opportunity to visit Disneyland a few weeks ago. Amid all of the costumed Mickey and princesses I found a place that fed my superhero dreams. Disneyland’s Innoventions focuses on acquainting visitors with futuristic technologies. I skipped the video games and went straight to the upper level where Iron Man, Thor, and Captain America were waiting.

After entering the Tomorrowland building you get a full view of what looks like the inside of Tony Stark’s armor room. The wall is covered with the different incarnations of the Iron Man suit, with the most recent version on display in the middle of the room. I felt like I was in the movie looking over Tony’s suits and marveling at the coolness of it all.

Moving around the building in a semi-circle, next up is the chance to actually become Iron Man. Using advanced motion capture and Kinect, participants stand in front of the large wall screen and become Iron Man. Pieces of armor assemble over your body to include dynamic movement. Then you get to play around on screen as Iron Man while you learn to fly and shoot. Just leaning one way or the other made the suit on the huge display move around. It was very cool and surprisingly responsive to everyone’s movements. But please don’t think you’re being original when you start twerking in the Iron Man suit- everyone else has done it before you!

After Iron Man you move to the mighty Thor! Yes, Thor: Treasures of Asgard is a bit more dramatic of an exhibit. You get to see the swords, shields, and other artifacts from Asgard displayed as if you were in a museum. Loki’s helmet and the Dark Elf mask are there as they usher about 20 people into a room. A voice comes over the loudspeaker and announces that we will be taken on a cosmic bridge to Asgard. The wall moves away and we are in the throne room of Odin where Thor is there to greet us.

It’s pretty impressive and a fun way to introduce it all. Thor speaks in the signature formal Asgardian accent and interacts with the crowd. You can take a photo with the hero and he even picks a person out of the group to attempt to pick up his hammer once he sets it down. No joke, you can’t pick it up. Thor has to help the chosen person pick up his hammer to pose for a photo op. My kids were completely amazed and thought they were meeting the real Thor!

Finally, we get to the big draw for me, Captain America! After standing in line next to exhibits of Captain America’s different shields, uniform, and a display of how he grew after the super soldier serum you wait for a chance to meet Cap himself. Nice touches were the attendants hovering near the Captain. All the attendants for the characters were dressed as SHIELD agents. Yes, our line monitor, Amy, was in a black trench coat and pants ensemble with the SHIELD logo on it. I’m not going to lie, I really wanted that outfit!

We finally met Captain America after standing in line and chatting briefly with SHIELD. I wasn’t prepared for how star-struck I became! Really, meeting Captain America fulfilled all of my elementary school nerd aspirations! I knew he wasn’t a real superhero but it didn’t matter; he was very convincing and I was willing to play along. This guy was poised, very polite, and humble.

He made a couple of light jokes about being frozen for so long. When my four-year-old daughter was scared to talk, he asked her about the movie Frozen and wanted to know how to build a snowman. It got her to talk, they chatted about snowmen, and Cap mentioned that it sounded like building snowmen hadn’t changed much in 70 years. Yes, he really was in character the entire time! He made WWII references and took a bunch of great photos with my son. I also jumped in and got my photo taken with him as I beamed like a crazy superfan. The whole experience was worth all the waiting in line! I’m ready for Agents of SHIELD to come back to my TV but I really wish I was watching in that trench coat!