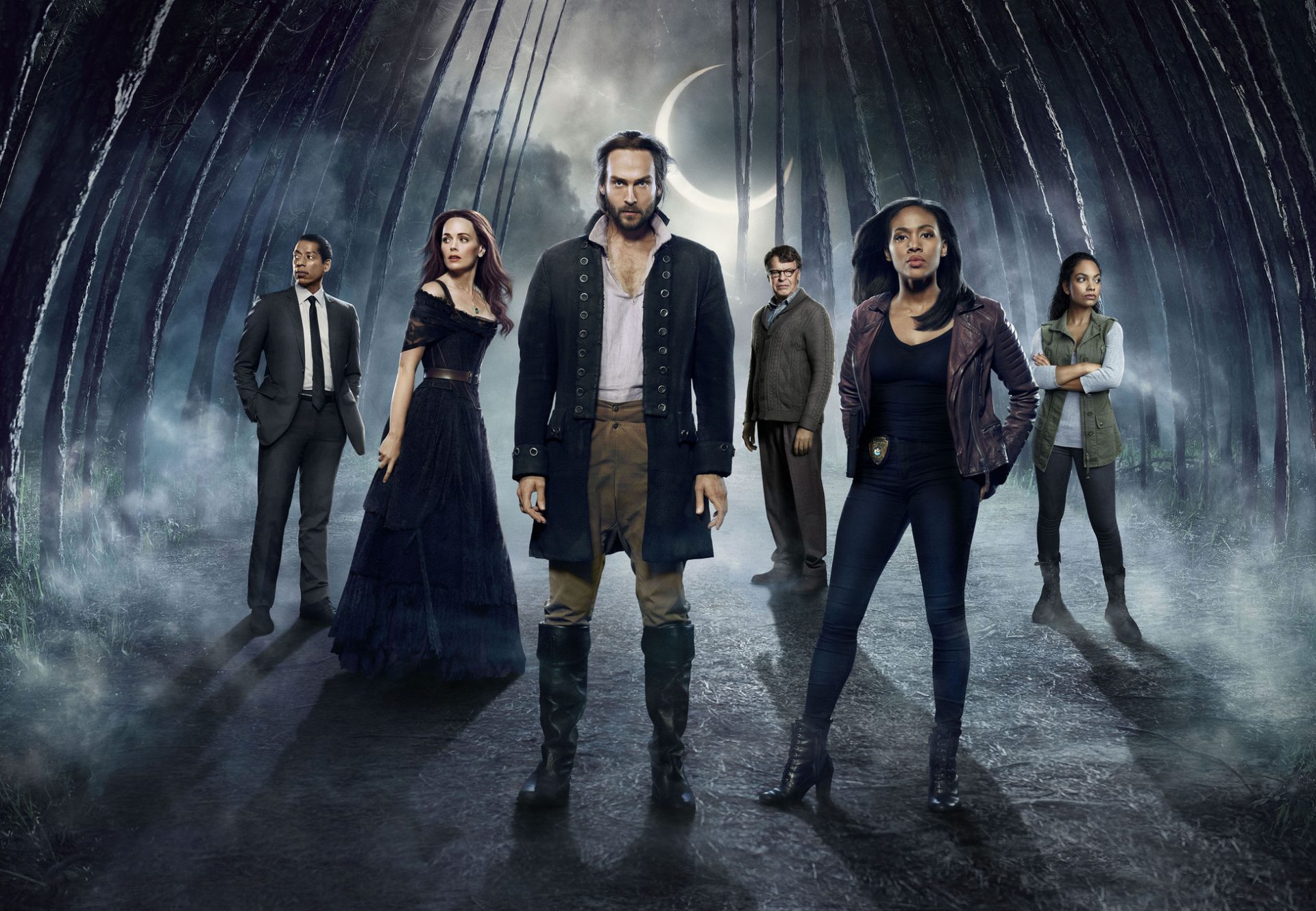 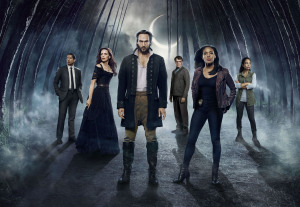 Warning: this recap contains spoilers!  Well I said it before and I will say it again…do not watch Sleepy Hollow before bedtime if you are a complete scaredy cat like I am. Just like season 1, season 2 starts off with plenty of things that go bump in the night elevating the creepy factor to about 6 or 7 (on a scale of 1-10). Yes the wait is finally over, Sleepy Hollow’s season 2 premiere has happened and Sleepyheads everywhere rejoiced. Before we jump into what happened during the premiere episode lets talk about where we last saw our heroes. Season 1 ended with a shock to the system as it was revealed that Henry, Icabod’s son was one of the Four Horsemen of the Apocalypse (Horseman of War) and an agent of Moloch. Henry imprisoned his father in a coffin buried underneath the ground, his mother Katrina was given to the Headless Horseman as some sort of prize, Abbie Mills is trapped in purgatory and her sister Jenny is stuck in an overturned vehicle. Last but not least our comedy relief (whether he wants to be or not) Captain Irving of the Sleepy Hollow Police Department is arrested for two murders that he admitted to but did not commit.  What will ever become of our heroes…. 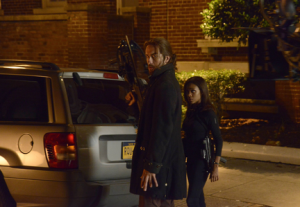 The premiere episode “Hellfire” starts us off with a surprise birthday party for Ichabod Crane that consists of only one other attendee, Abbie Mills. They are quick to establish that 1 year has passed since we last saw our two witnesses but I was not buying what they were selling. Could it be because everything had a sort of cloudy look to it as if in a dream, or was it because I was in denial about the deaths of two main characters they announced shortly into the episode… my guess is the latter. On a trip to a mystery history professors house, Ichabod and Abbie are attacked by the Headless Horseman. Ichabod, seeing red, wants to chase the Headless Horseman into the moonlight but is stopped by Abbie Mills, as she reasons with him citing that they are outmatched and need more ammo. He then screams that the Horseman killed his wife (Katrina) and Abbie reminds him that her sister Jenny was also killed but that they need to stick to the plan. At this point I am confident that this isn’t really happening because only True Blood would kill a main character off screen….I said it! *As a side note here there was a quick shot of a plant on the desk of the mystery history professor that appeared to grow when Ichabod looked at it but he quickly dismissed it and continued with what he was doing. This is clue #1. 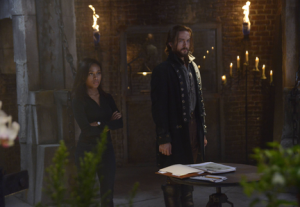 After looking through the information the Headless Horseman was after, Ichabod discovers a picture of a key Ben Franklin had in his possession. Abbie discovers from notes in the archive that the key was called the Gehenna key and that it unlocks purgatory. Ichabod breaks the news to Abbie and all us watching at home that Franklin put that key on a kite to try and destroy it, not bring the modern world electricity… THANKS FOR THE LIES HISTORY CHANNEL! To find out more about the key they pay a visit to Henry who is being kept in what looks like an underground holding facility. Abbie gives Henry a plant as payment for helping them and Henry puts it with other plants underneath an artificial light. He waters the plants while saying that because his plants still bloom in this artificial atmosphere that it is “A testament to the fact that anything can be tricked into believing a lie” *This is clue #2

Abbie excuses herself and Ichabod from the room and behind the observation window she tells Crane that she remembers being told about a sketchbook Jenny fetched from Philadelphia for Sheriff Corbin a long time ago. Crane immediately grabs his chests and appears to have trouble breathing. He states that he feels odd, and that he can’t really remember the last year. He asks Abbie if she remembers how they actually caught Henry, to which Abbie replies that she doesn’t…*clue #3 just slapped you in the face. Henry breaks his bonds and goes all rat eyes on us revealing that everything is a lie, that they are in purgatory and have given him the information he needs for Moloch. Crane awakes in his coffin in the ground exactly where we left off last season, and Abbie is back in purgatory.

The next scene shows us that Jenny is indeed still alive after quite the car crash. She is tied to a chair and revived by Henry with a shot of what I can only guess is adrenaline to the heart. He uses his ability to extract information about the key from Jenny’s memories. He tells the guard to leave her alive until he has the key and then exits the building. Meanwhile, Ichabod discovers that he is buried under dirt that contains sulfur and starts to form a plan on how to get out of his current predicament.

Katrina we find tied up in some sort of cabin. The Headless Horseman appears, unties her and puts bread on the table with a knife. Katrina takes a piece of the bread eats it and then without blinking grabs the knife and stabs it into the hand of the Headless Horseman.  I laughed and rewound that particular scene at least 2 or 3 times, go Katrina! Alas, Katrina does not get far before she is grabbed by the Headless Horseman and then re-tied to the chair.

Abbie is chilling in purgatory when she is grabbed by Andy Brooks and pulled down to the ground out of view of Moloch who is of course up to no good. Andy informs Abbie that Moloch is creating a demon army he wants to release onto earth. Abbie requests that Andy take her to a place where she can get a message out to Ichabod about the events happening in purgatory. Andy tells her about Moloch’s lair and the two are off.

We find Ichabod recording a goodbye message on his phone should his plan not work only to have it say memory full at the end of the recording. Ichabod obviously needs an upgrade. He then lights a makeshift fuse and uses the sulfur to blow a hole into the coffin that is keeping him trapped in the earth. He immediately calls Jenny, which is all the distraction Jenny needs as the guard looks to the phone and then gets hit in the face by Jenny, followed by a kick to the groin, and then eventually stabbed with a knife. I am impressed with Jenny especially since a car crash like the one she experienced would give any normal person at least a concussion. Not Jenny though, she just dusted her shoulders off and kept going. She immediately texts Ichabod her location and then starts to fight her way out of the building. Pinned down in a gun battle Jenny is saved by Ichabod who is driving an ambulance through the abandon building’s door. They drive away and head towards the archives in the hopes of finding the location of Franklin’s key. Jenny has an idea of where it could be buried in Sleepy Hollow based on the cipher Ichabod translated stating that Franklin left the key with himself. 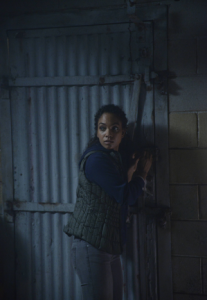 Abbie has made it to Moloch’s lair and uses the mirror inside to talk to Ichabod. Can I just say that her ability to pronounce the incantation in perfect Latin while under pressure was impressive. I would not be able to do that with 3 days practice. Once Ichabod is contacted she tells him of Moloch’s plan and that maybe finding the key is a trap. She urges Ichabod to leave her in purgatory as it would be catastrophic should Moloch get the key from Ichabod. Of course Ichabod refuses to leave Abbie and states he will be back for her soon. They make plans to meet behind the church in purgatory.

Ichabod and Jenny find Henry’s men digging around for the Gehenna key, but a memory of Ben Franklin saying “The key to success lies under the alarm clock” tells Crane that the clock tower is home to the key. After finding the one brick that is inscribed with Ben Franklin’s initials, Ichabod uncovers the key and heads back to get Abbie out of purgatory.

Katrina has been tied up for what seems like days now, and is once again greeted by the Headless Horseman, who without a head can change clothes faster than any other person EVER. He puts a necklace around her neck and she can see his head again. He uses this to communicate to her that Ichabod will be dead by morning and that Katrina will once again be his. 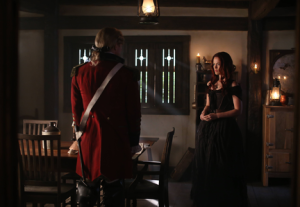 Ichabod heads into purgatory just in time to stop Abbie from drinking water given to her by a faux Ichabod Crane (first rule of purgatory, do not eat or drink anything in purgatory). Abbie attacks faux Ichabod but is knocked down. Ichabod and faux Ichabod fight, one besting the other, then yelling at Abbie to run. The “correct” pronunciation of the word Lieutenant tips Abbie off that it is not the real Ichabod Crane and she cuts off his head. The women are obviously ruling this episode. They both exit purgatory and thwart Moloch’s current plan. The episode ends with Henry being given the shell of an armored suit that he can control with his soul fully becoming the Horseman of War.

This episode did a good job answering many questions that were left hanging from season 1 the most important one being, does Ichabod have his cell phone with him in the coffin? I know everyone out there was on pins and needles waiting for that answer and we got the answer in a humorous way. Score one for the writers! The only piece of missing information we still have is what is happening with Captain Irving but you can only answer so much in a 45 min episode. My hope is that we see Irving in the second episode and receive some answers to our questions involving him. What would you like to see happen in the next episode? Let us know by commenting below and we can get a conversation going. Until next Monday Sleepyheads!

TVTalk with Natasha and Kimberly Ep 40